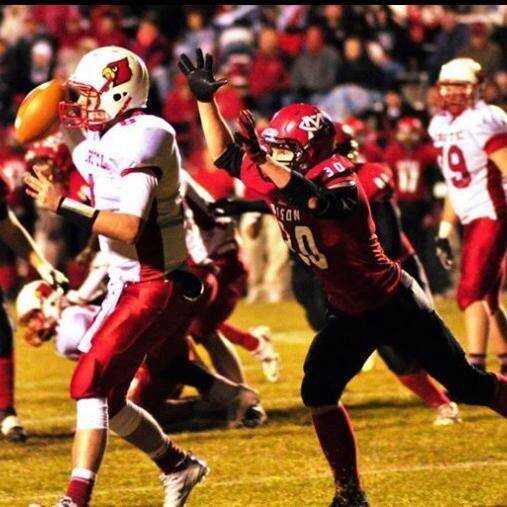 McCook's Colton Lashley was a unwelcome guest in the Northwest backfield all night Friday in Grand Island.

McCook shut out it's second straight opponent in 2 games and the Bison offense struck for 21 first quarter point to send the Grand Island Northwest Vikings back down to earth, 45-0. Northwest shocked Adams Central on opening night a week ago 34-7 and thought they had a great shot at giving Class B's 2nd rated McCook team a run for their money. But the Vikings never got going and it seemed like the Northwest spirits were crushed when outstanding Bison running back unleashed a spectacular 77 yard scoring jaunt with 1:55 left in the 1st quarter. Things soured even further in the waning seconds of that opening quarter when McCook QB Caleb Sheets nailed Kasey Taylor with a 39 yard TD pass. Before the Viking faithful could get comfortable in their seats, McCook had a 21-0 lead. And this was without the services of the Bison' best player and QB/LB, Colton Sis.

The only thing McCook super coach Jeff Gross could have been disappointed in was the 80 yards in penalties the Bison accumulated. Not much else went awry for the invaders from the West who returned 16 starters from last years team that was a whisper away from playing in Lincoln. Returning 1000 yard rusher Trevor Matson ran for 149 yards on 14 carries, 147 of those coming in the 1st half. Matson was hit in the nose by his won helmet after taking an undercut hit to the chin and did not play much after the perfectly clean hit by a Northwest defender. The 6-2, 200 pound senior is just a nice blend of speed, power and elusiveness. Matson is faster than you think and can plant and change directions quickly. His fine cut back ability was never better on his 77 yard touchdown gallop.

Northwest alternated quarterbacks Christian Ellsworth and Brock Brown but just couldn't get things moving. Ellsworth seems like the better passer but Brown can put his head down and get the tough yards. Those yards were tough to come by for the Vikings as players like Bison linebacker Colton Lashley made life miserable with his blitzes. Lashley sparkled on 2 consecutive plays late in the 2nd quarter when he burst through and sacked Ellsworth for losses of 7 then 8 yards. Matter of fact on 46 Northwest rushing plays, 12 went for negative yards. To demonstrate how efficient the Bison defense was, Northwest could muster only 77 yards rushing and 80 through the air for the night. McCook's "D" also got into the scoring act when junior LB Bret Baumbach scooped up a Northwest fumble and took it 54 yards to the house.

McCook rushed for 244 yards in the game, led by Matson's 149. Backup quarterback Easton Gillen who looked like an electrified water ug out there, rushed for 48 yards on only 4 carries and threw a 4 yard TD strike to Nick Glaze in the waning moments of the game. Glaze completed all 3 of his passes for 18 yards and that score. Overall the Bison QB's completed 11 of 15 passes for 129 yards and three TDs. Northwest QB's combined to go 10 of 20 for 80 yards.

The Bison will return home next Friday when they host a Scottsbluff team that had to rally to beat an improved Hastings team 49-34 in a wild one. The Vikings will hop on the bus early next week and head to Alliance to face the 0-2 Bulldogs. That game time is 6PM. Alliance gave Aurora a game of it before falling to the Huskies on Friday.