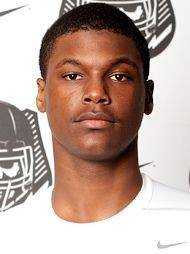 Omaha Centrals Daishon Neal was a standout on defense against Lincoln North Star.

On a Thursday night opening game at Seacrest Field, Omaha Centrals defense came up big when it counted as the Eagles notched a 28-18 win over a well-prepared, young Lincoln North Star football team. On offense, retuning 1000 yard rusher Tre Sanders lit up the Gator defense early with spectacular touchdown runs of 60 and 76 yards to give Omaha Central a 14-3 halftime lead. Sanders ran right most of the night to take advantage of big tight end Daishon Neal, who stands 6-7 and weighs a lean 250. But it was North Star, who returned only 3 starters on either side of the ball and 1st time QB starter Trevin Ball, that left the Class A football world pretty impressed.

North Star actually struck first after a fine opening kick-return that carried all the way to midfield. It took 11 running plays and 1 pass for the Navigators to advance to the Eagle's 10 yard line at which time WR/DB/K Alex Stogdill connected on a 25 yard field goal. Junior quarterback Trevin Ball, who was starting for the 1st time, ran for 40 yards in the drive.

It took only 6 plays for Central to answer. Tre Sanders scooted around right end, then executed some dazzling moves with some jet speed, that carried 60 yards for the score. After North Star was forced to punt on their 2nd possession, it was once again Tre Sanders that put 'em in the aisles with a highlight reel 76 yard dash on the 1st play of the Eagle possession. Outside linebacker Corbin Foster picked off a Trevin Ball pass on the Gators next possession but the Eagles couldn't convert with the short field (55 yards).

On Centrals final offensive go around of the half, sophomore quarterback Jordan Flowers went to the air after Sanders gained 13 yards. Flowers scooted for another 23, then hit Sanders for 17 yards, SE Demetrice Marable for another 15 before delivering a bad pitch on a sweep that stalled the drive on the Gator 20 to end the half.

North Star's opening possession of the 2nd half was impressive to say the least. Following a Central punt to their 20 yard line, the Gators unveiled a new offensive set with Ball flanked by a RB on his immediate right and left and a fullback a few yards behind. After an 11 yard dash by QB Trevin Ball, the Eagles were called for a personal foul. Ball then ripped off an 18 yard gain to the Eagle 20. It was then Keneau Russell for 4, Jacson Mikaya for 5, an offside penalty by Central, and finally an 8 yard TD run by Caleb Brown. The Gators were right back in it, trailing 14-11 after the 4:36, 10 play drive.

It took only 3 plays for Omaha Central to answer the North Star score. 170 pound junior Tae Anderson, who quickly ran on the field to replace a cramping Tre Sanders, calmly took the handoff on a draw play and sprinted 37 yards through a huge opening right up the gut for the score.

31 seconds later, North Star quarterback Trevin Ball rolled to his right and fired a perfect strike to the speedy Alex Stogdill who jetted 60 yards for the touchdown. Stogdill then booted the extra point through to pull his team to within 21-18 with thirty two ticks remaining in the 3rd. On the ensuing kick-off, an onside, it was Stodgill who made the recovery to set up the Navigators at the Eagle 32.

It was right then and there Centrals defense came up with some stops which was magnified by a North Star holding call. The 3rd quarter ended with Central on top 21-18.

The Eagles looked like they might deliver a knockout blow when they fashioned a 72 yard drive. But Tre Sanders, with a new uniform jersey, #10, had the ball ripped out at the Gator 7 yard line to halt the drive. North Star then took it all the way to midfield keyed by a 25 yard run by Ball and a 15 yard dash by Mikaya. The Eagles "D" then spilled Caleb Brown for a negative 8 yards, sacked Ball for a 3 yard loss and forced a punt by North Star. Big Kolbie Foster blew through to block the attempted punt and set up the Eagles at the Gator 31. Sanders then gained 14, 15, then sprinted a yard for the TD with 3:46 left in the game. Central led 28-18.

North Star had one more shot. Starting at their own 25, sophomore QB Trevin Ball nailed Caleb Brown with pass completions of 11 and 10 yards, then took off on a 26 yard quarterback draw that carried all the way to the Central 23. Two plays later the Navigators were at the Eagle 5 yard line with less than a minute to play. But a bad snap from center sailed back to the 25 yard line and the Omaha Central defense was all over Ball for a 20 yard loss......ball game, ball game. Omaha Central 28-18 Lincoln North Star.

Needless to say, Tre Sanders had a great opening night running 21 times for 181 yards annd 3 scores. On defense for the Eagles, it was the beast Daishon Neal leading the way. But the Eagles defense was probably surprised by the fine interior line blocking and cool handed quarterback play by North Star. Trevin Ball, who played in the shadow of 3 year starter Brook Bolles a year ago, ran 21 times for 140 yards and completed 7 of 15 passes for 104 yards and a TD. Many of Ball's rushing yards came on plays where he would merely take a step or two back then sprint through a nice hole right through the Central middle.

The Gators ended the night with 302 total yards compared to Omaha Centrals 416. Central's defense came up big when it mattered, Tre Sanders was his usual sparkling self, but it was the well-prepared, sharp opening game performance engineered by 12 year North Star head coach Mark Waller that turned some heads. In a wide-open Lincoln city race, the Gators served notice that it will be a team to contend with.

Next Friday Omaha Central will open it's home season by hosting Papillion LV (42-6 loser to Creighton Prep), while North Star will return to Seacrest to play Lincoln East (40-34 loser to Bellevue East) in a 7:00 match-up.