High School Football Season is closer than you think. 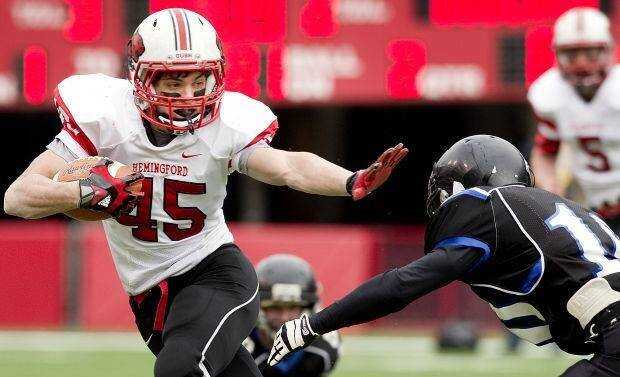 Today will mark 4 weeks away from the start of High School Football practice in Nebraska. So, no better time to begin spotlighting the running backs to keep an eye on in 2014. A pretty salty group of 37 one thousand yard rushers return this fall led by the record setting Calvin Strong of Omaha North. Strong is the first Nebraska schoolboy ever to top the 3000 yard rushing mark in a single season, rambling for 3,008 yards last fall. The outstanding junior led his Omaha North team to a state championship in Class A a year ago.

The addition of 9 game schedules to Classes C-1, and C-2 have this guy jumping for joy. I've long contended that an 8 game season is too short considering the hours of practice these young men put in on the practice field. Personally, I know of no other high school sport that has kids conditioning like mad during the summer, beating each other up starting in the middle of August and lasting all the way to the end of October for...................8 performances. One more game doesn't seem like much, but it seems to be just about right for a regular season slate. Hopefully the 8-Man classes will follow suit at the conclusion of this 2 year cycle of an 8 game regular season schedules.

Among the outstanding backs to spotlight this fall are 5 runners who have a legitimate shot at reaching the prestigious 5000 yard career rushing mark. Omaha North's Calvin Strong is already there, having gained 5,124 yards, all but 224 of those coming the last 2 seasons. There are currently only 32 running backs in Nebraska high school football history that have gained over 5000 yards in a career.

Strong is currently ranked 26th. Corey Eikmeier of Dodge is the King of all rushers in this state, having amassed 8,330 yards in his illustrious career which spanned from 1998 to 2001. Mullen's Steven Dent is 2nd at 7,903 yards, Both Eikmeier and Dent were 8-Man runners. The 11-Man career leader is Mike Brower of Fillmore Central who rushed for 6,099 yards during his varsity years which stretched from 2000 to 2003. Strong would need only 1,876 yards this season to be the all-time 11-Man career rushing leader in history.

Among the backs that we'll preview in the series that begins next Monday, July 21st are Dylan Loberg of Randolph (3,510 career yards), Nick Arlt of Oakland-Craig (3,478), Ethan Skinner-Hemingford (3,454), J.J. Oltmer-Humphrey St. Francis (3,308) and Alex Kunz of Stuart (3,087 career yards). These 5 backs are of course, among the 37 returning thousand yarders coming back this fall.

We will also preview the quarterbacks that threw for over a 1000 yards a year ago. This should be a fun series of blogs leading up to the opening games of the 2014 season which commence on Thursday, August 28th. I already have opening night at Lincoln's Seacrest Field circled on my calender where Omaha Central meets Lincoln North Star. A super sweet matchup of Hartington Cedar Catholic and David City Aquinas the next night might just be a great way to top off the opening week of high school gridiron action.

So, Monday, July 21st the spotlights will be fired up in our features of Nebraska high school running backs, quarterbacks and a few wide receivers preparing to set foot on the football fields of 2014.

But let me leave you with two thoughts before I bid you farewell for a week.

1) Even the finest of all running backs go nowhere without the blocking of their offensive line.

See you in a week!