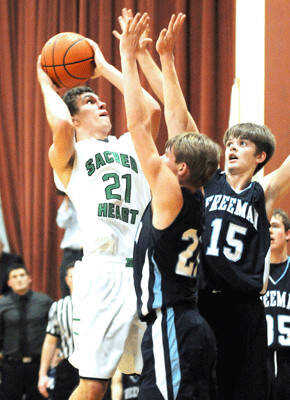 This coming Saturday February 15 the Heartland Events Center in Grand Island will be alive and kicking with some very fine high school basketball. Local entrepreneur Tino Martinez has lined up 8 match-ups that will feature teams all the way the southeastern edge of Nebraska all the way to Denver, Colorado. The 7th annual Heartland Hoops Classic will commence next Saturday and is not only the only one of its kind in Nebraska, but the only one to withstand the winds of time.

We will spotlight each of the eight games in the days to come and get basketball fans prepped for the outstanding schedule of games on tap for the 7th Annual Heartland Hoops Classic.

Here is the lineup of games:

10:45am Freeman vs. High Plains Community

This game will pit the D-1 Overton Eagles against C-2 Sutton. Overton is a traditional football and basketball power and this season is no different. 2 of the Eagles losses have come against a very good Elm Creek squad who is currently 17-2. The high point of the 2013/2014 surely has to be the resounding 62-45 beating of North Platte St. Pats, who always has a powerhouse hoops program.

The Eagles just dropped a decision to Elm Creek in the finals of the tough Ft. Kearny Conference last Saturday at the Viaero Events Center in Kearney. Overton is no stranger to big arenas.

Sutton is coming off a banner season a year ago when the Mustangs played in both the C-2 football AND basketball championship games. Southern Valley beat the Mustangs 38-34 in C-2 basketball finals a year ago and Sutton suffered some pretty significant graduation losses coming into 2013/2014, not to mention legendary head coach Steve Spongberg retiring to take the Hastings College baseball gig. But the Mustangs have started to catch fire after dropping 5 of their first 7 games, and those coming against a brutal schedule that included High Plains, Lincoln Christian, Hastings St. Cecilia, Wood River, and Freeman. How does a combined record of 77-20 for those 5 teams grab you?

All-state football and basketball star Cole Wiseman leads this Mustang team who will just suffocate you with their defense and lull you to sleep on offense, then score when you're snoozing. Sutton's "D" is holding opponents to a paltry 35ppg while Wiseman leads the way on offense, along with Tristan Sheridan (6-1 Soph), and 5-11 junior Andrew Pawlowski, who can drain a trey now and then.

If you are a late sleeper, just set the alarm a little earlier because you won't want to pass this baby up.

Freeman made it all the way to the Class C-2 semi finals a year ago before losing to eventual C-2 Champion, Southern Valley.

The Falcons lost only ONE player off their entire 2013 roster and are outscoring their opposition by 50-34 this season. Freeman is led by the dynamic duo of Isaac Frerichs and Cole Schuster. The 6-3 Schuster is leading the scoring parade with 16.4ppg and is the quartetrback on offense. Schuster also is one of Eastern Nebraska's leading hardwood thiefs with 52 steals and is hitting treys at a 34% pace. Isaac Frerichs creates offense with his skillful defensive play. Frerichs is not far behind Schuster in scoring with 16ppg. The Falcons also have Derek Veerhusen, a 6-0 senior who plays hard. Freeman starts a nice 6-5 sophomore named Holden Scott who be a force now and in the future.

If you haven't seen High Plains play, this is going to be a real treat for those who love quick, lightening fast transition basketball. The high flying Storm of Cameron Hudson can flat out play the game and are moving up two classes to play Freeman.

High Plains is belting its opposition by a margin of 67-37 and were D-2's number one team until 16-3 Exeter-Milligan upset them in the semis of the Crossroads Tournament a week ago. Both Cole Klingsporn (6-3, Jr.) and Sr. Logan Fleming (6-0) were World-Herald all-state basketball players a year ago and are leading the way on this year's outstanding squad. Fleming is one of the leading scorers in the state at 19.5ppg and Klingsporn is also in double figures with 11.8 points an outing. The Storm nails 53% of all their field goals, and if you leave either Klingsporn (41%) or Fleming (37%) alone, they'll kill you from beyond the arc.

Of the teams reporting statistics to MaxPreps, High Plains is 4th in the state in scoring (67) and lead the state with an incredible 326 steals, 17 per game. They also lead the state in assists with 18 a game, 110 of those coming from floor general Cole Klingsporn.

So, this baby is going to be a Classic match-up of high powered offense against stone-wall tough defense. Can't wait for this contest.

Next up we'll look at the Elkhorn South/Grand Island and Wahoo Neumann/GINW match-ups.

And if you don't think Elkhorn South couldn't compete with most Class A teams in Nebraska, think again.