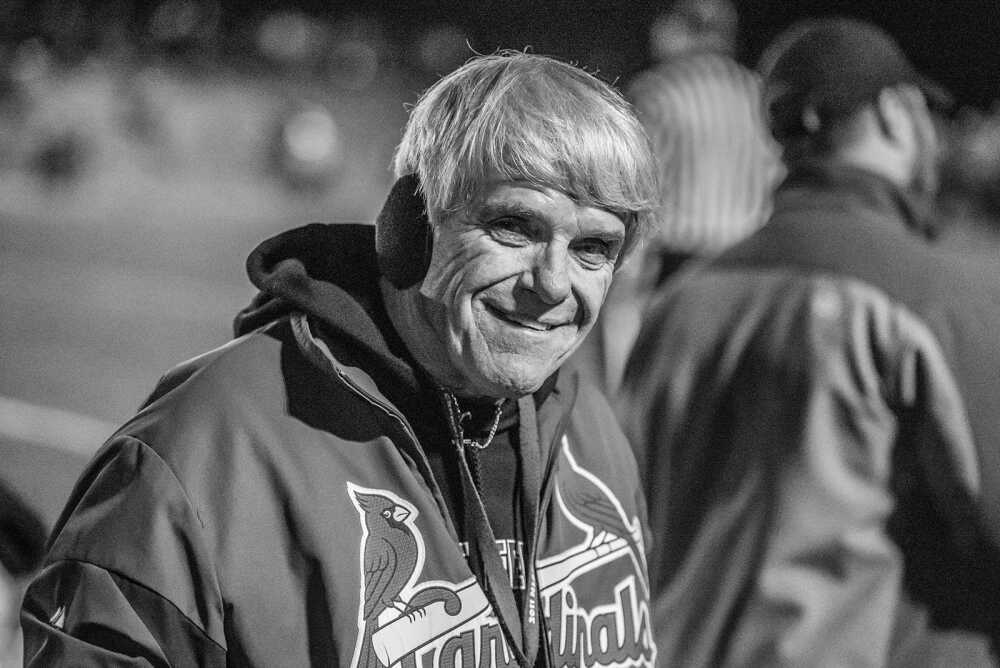 Senior led the Dukes to their dream season with his cool head under pressure. No, the State Final didn't go the way Kaliff wanted but that didn't erase his outstanding season. In 13 games Kaliff hit 57% of his passes for a whopping 2,529 yards and 16 touchdowns. Finest hour was Kaliff's 20 of 36, 340 yard performance in the wild overtime win over Ralston in the quarterfinals.

A 3 time 1000 yard rusher, Wallace started the season with a 6 carry, 20 yard performance against Crete. After that, Wallace was literally unstoppable. Ended the season with 2,549 yards and 37 touchdowns. Only Omaha North's Calvin Strong had more rushing yards than Wallace. Even the vaunted Skutt defense couldn't hold him under a hundred yards (123). Incredible vision and blinding speed.

Scary thing about Neville is that he's listed as a fullback. 1,642 yards and 24 TDs isn't too bad for a big bruising FB, huh? Actually, Neville is every bit a running back and has the speed to prove it. Also a fierce linebacker, logging 138 tackles for the Dukes. Went off for 352 yards on 19 carries (18/carry) and 5 TDs against GINW this season. Tough customer on either side of the ball.

Led the Red Raiders to their best season in history by running for 2,053 yards and 20 TDs. Lewis carried the ball an insane 353 times in 11 games. That's 32 times a contest and in high school that's a load. When Sidney wanted the tough yards, the ball went to Lewis. One of two 1000 yard runners for the Red Raiders.

#4 was QB Nick Stoltenburg's favorite target, grabbing 35 passes for 679 yards and 5 TDs. Templeman had a knack for getting open with smooth, slick moves and used his long strides to run away from defenders. A 4.5 forty didn't hurt either. Had a 4 catch/146 yard performance against tough Omaha Gross and embarrassed Crete by fielding a short pass and taking it 97 yards for a score.

Opened the truck sized holes for Isaac Wallace and had 38 solo tackles on defense despite being double teamed almost every play. The big fella is also skilled enough to average 14 points and 10 rebounds a game for the Rams in basketball. Sure-fire college player for somebody.

Shinging, shining star for a 2-7 football team. Penny averaged 14 tackles per contest and logged 126 tackle points with 48 solo stops when he play defense. Great blocker for a Platteview team had had over 1,800 rushing yards.

Big number 73 blew open some huge holes for Antler runners and was a force from his defensive tackle slot. Larson benches 350 pounds, plus he moves and jumps well for his size as evidenced by his 27" vertical and 5.1 forty yard dash.

Arneson is a frightening sight for anyone across the line of scrimmage from him. Big Noah runs a 4.9 forty, benches 320 and has a vertical leap of 29 inches. Helped clear the way for 2,331 rushing yards for the Cougars and had 45 stops on defense. Has D-1 talent.

Was the SkyHawks best offensive lineman and a great pulling tackle for Coach Matt Turman. When Skutt needed the tough yards, they ran the play through Doeschot. This kid WILL play college football for somebody.

How about these stats? Zeplin led the state in interceptions with 8, and had 56 tackle points from that DB slot, which is outstanding considering the position. On offense, the splendid athlete had 27 receptions for 606 yds and 9 TDs. How well did Zeplin defend from his DB slot? He shut down all-state York standout receiver Ty Danielson to 1 catch for 7 yards in the Class B State Final.

All-State basketball star knew all about it on the football field too. Led Class B in recieving with 833 yards (36 catches) and 7 TDs. What's amazing is that Danielson missed 2 games+ with a leg injury and still accumulated those stats. Stellar defensive back who did not have a touchdown scored against him all year. Could have made it as DB on all-state too.

In 11 Bison games, Lyons was good on 29 of 30 extra point kicks and nailed 13 of 17 field goal attempts for a total of 68 points. Longest field goal was a 45 yard beauty. Following in the footsteps of the great Cherry boys who were excellent kickers for the Bison in recent years.

Opposing teams just DID NOT have success running from Skutt's strong side DE side. Reason for that is Bouda resided there, averaging 8.3 tackles a game. Ryan logged 11 tackles for losses this fall and recorded 4 sacks. Was the SkyHawk's best defensive lineman. Bouda was a shining star in the State Finals, recording 5 tackles, 2.5 sacks and 3.5 tackles for loss. Great ambassador for Skutt Catholic High school.

Just has to be the most intense, head hunting defensive player in Class B. Talk about strong, McEwin can bench 380 pounds and absolutely sends fear into the hearts of any and all opposing ball carriers. Nick had 74 solo tackles and added 81 assists for a 155 tackle points. His explosion at the point of impact is frightening. McEwin also had 116 yards on 22 carries on offense and loved to take defenders on a ride when he logged a carry. Could very well be a Super State selection on anyone's list. I'd call this guy, "SIR"..

Opposing teams would have to double team this guy which opened the door for Skutt's linebackers to finish the job on defense. Despite the double teams, Thielen logged 46 tackle points and had 3 sacks. Had 3 stops and one tackle for a loss in the State Final win over York.

One of 6 linebackers on this star studded defense, Schany had 128 tackle points and 16 tackles for losses. On offense, Schany carried the ball 171 times for 1,328 yards (7.7/carry) and scored 12 touchdowns for the 5-5 Bears.

Schany garnered a full ride to Virginia University in wrestling and is currently rated 7th in the United States in his 182 pound weight class......talented lad.

Leader on that great Duke defense. Otte had a nose for the ball and was always where the action was, recording 121 tackle points. Otte also had 6 sacks from his LB spot and was a sure handed tackler. Was a monster in the State Final loss to Skutt, logging 13 tackles, 1 sack and 2 tackles for losses. This kid knows how to play defense, folks.

In a linebacker rich 2013 All-State Defensive squad, Bricker fits right in. This dude can flat out smell out a ball carrier and snuff out a run. Bricker had 82 solo tackles for the Huskies and 118 tackle points. Powerful blocker on offense for 1000 yard runner Brock Reichardt. Bricker also had 606 yards from his FB slot and scored 12 TDs.

100% pure football player through and through. Repeat all-state selection, Vigneri had to shoulder a heavy load due to the heavy loss of seniors from last year's State Championship team. Despite that and some nagging injuries, Vigneri had 84 tackle points, 4 tackles for losses and recovered one fumble and picked off a pass. On the offensive side, Anthony rushed for 594 yards scored 7 TDs and totaled 761 all purpose yards.

Do it all man for the Orangeman....and how. Workman could have easily made the offensive all-state squad, rushing for 1,693 yards and scoring 23 TDs. On defense he was a force, logging 33 jarring solo tackles and 81 tackle points. Jessup scored 152 points for Beatrice and just was a daunting task to bring down with his power and low point of gravity. Workman should have a scary senior season.

One of the leaders of this Bison squad that was one step from the finals, losing to eventual state champion Omaha Skutt. Stone had 48 solo tackles from his LB spot and 85 tackle points. Stone also pirated 2 passes, recovered a fumble and caused 2 others. On offense, he was the man to get the tough yards from his fullback position. Stone rushed for 584 yards and scored 6 TDs for the Bison.

A familiar sight in that Orange defensive backfield, Buss had 4 interceptions, recovered a fumble and forced 4 others. Was one of the best cover men in Class B. Seemed to always be in the right place at the right time.

Played in only 7 games because of a season ending injury, but still was regarded by many as the best DB in the state in Class B. Despite playing only half the year, Koley had 51 tackle points on defense, an entire season of stats for most. At QB on offense, Koley completed 60% of his passes for 673 yards and 7 TDS and rushed for 318 yards and 6 more scores. Not many make the all-state team playing half a season, but Koley deserved the honor, trust me.

Averaged 38 yards a punt, but it was ball placement on those punts that made Fulk special. Fulk dropped 8 punts inside the opponents' 20 yard line in 2013. Also was the Duster's QB, passing for 1,093 yards and 8 TDs. Also rushed for 331 yards and was a sparkler as a defensive back with 78 tackles points and 5 interceptions. Fulk also recorded a long distance Pik-6 this season.