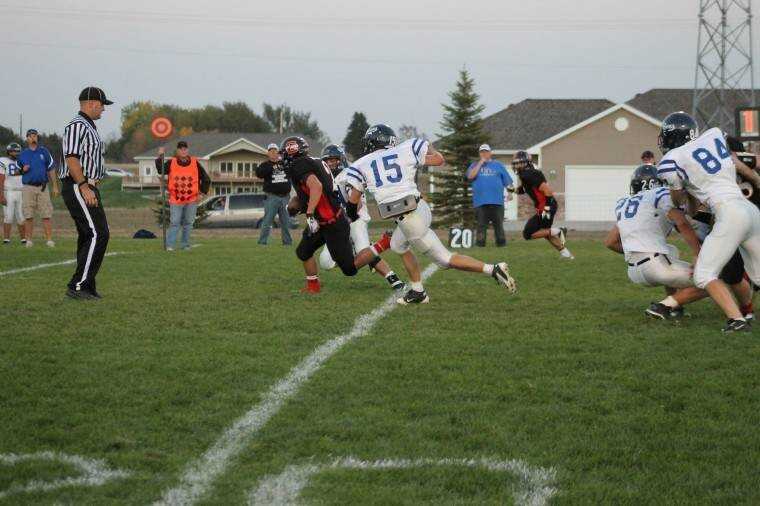 Creighton running back Jacob Morrill etched his name deep in the Nebraska high school football history books Friday night. The 200 pound senior accomplished something many of us may never again see in our lifetime. Yes, it was that special.

Morrill carried the ball only 8 times in the Bulldog's 74-12 win over Plainview, but his 156 yards elevated him to an elite status only 2 other backs in Nebraska high school football history have ever attained. Jacob Morrill's 156 yards swelled his season rushing total to 1,041 yards. Morrill became just the 3rd player ever to rush for over a 1000 yards FOUR times in a career. Jacob's Friday total also upped his career rushing total to 5,085 yards and placed him in an elite group of 5000 yard rushers that numbers only 28. Morrill now currently ranks 26th out of 28 runners in history that have run for 5000 yards or more in a career with 2 regular season games to go in 2013. And with Creighton's football team currently undefeated, it appears Jacob Morrill may have some playoff games to pad that marvelous total.

The phenomenal Creighton running back ran for 1,143 yards as a Freshman, 1,347 as a sophomore, gained 1,554 last year as a junior, and has rushed for 1,041 yards on only 78 carries thus far this season (13.35/carry). Morrill has played in 41 games in his career including one state final his freshman season (a 45-30 loss to West Point CC) and a semifinal appearance the next season (another loss to WPCC 34-28).

The two other players to rush for 1000 yards 4 times are Brandon Holtorf of Prague and Mike Brower of Geneva/Fillmore Central. Holtorf hit the 1000 yard rushing plateau four times spanning a career that stretched from 1998-2001. Holtorf's Freshman and Sophomore seasons were in 8-Man football and the final two Prague played in the 6-Man ranks. Holtorf, who also PASSED for a 1000 yards in ALL FOUR seasons of his high school career, has a career rushing total of 5,348 yards, ranking him in a tie for 10th all time. The spectacular Michael Brower ran for 6,099 yards in a career that spanned the years 2000 through 2003. His total ranks 4th all time. Brower played 11-Man football all four years of his high school career.

We will have a deeper look into the world of Jacob Morrill down the road, but for now we'll just let the history maker and his Creighton Bulldog teammates concentrate on making a deep playoff run.

Congratulations to Jacob Morrill for accomplishing an almost impossible feat that may never pass our way again.