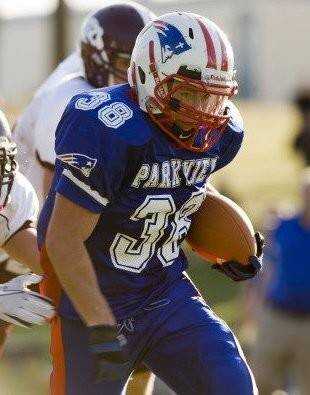 A fairly heavy dose of the "D-Train" proved to be too much for Osceola as Lincoln Parkview Christian came through with a 38-12 road win in a big Class D-2 district match-up Thursday night.

190 pound Parkview Christian senior Nate "D-Train" Davenport roared through the Osceola defense for 175 yards and 2 touchdowns to lead the Patriots to an opening D-2 District 2 victory.

The hard running, rock solid Davenport ripped off scoring runs of 33 and 64 yards in the first quarter to stake Parkview Christian to a 14-0 lead that they never relinquished. Junior quarterback Trevor Polivka took over the scoring duties after that, banging in for 3 more touchdowns that proved too much for the Bulldogs. Osceola's outstanding running attack was missing one of their main cogs going into the game on this windy evening. Running back Trevor Carlson, who had 267 yards in the 'Dogs first 3 games, was taken to the hospital on Wednesday evening with a high fever and remained there as of game time. Carlson's absence definitely affected Osceola's running game and transferred the pressure to sophomore QB Luke Erickson.

Parkview scored on it's 1st two possessions of the game with the 33 and 64 yard TD runs by Davenport. Osceola answered back to begin the 2nd quarter when they converted on a 4th and 1 at the Parkview Christian 4 yard line. Quarterback Luke Erickson hit speedy Colton Kuhnel on a 4 yard pass, then the 210 pound Erickson banged over from the one for the score pulling Osceola to within 14-6. A possible turning point in the game, albeit early, took place on the Patriots next possession.

Facing a 4th and 16 at their own 4 yard line, Parkview Christian attempted to get a punt away, but an Osceola defender bolted through and blocked the punt. Instead of being recovered in the end zone by the Bulldogs, Parkview punter Trevor Polivka picked up the loose ball and advanced it all the way to the Patriot 26 yard line. Parkview then reeled off an 11 play, 4 minute 52 second drive culminated by a Polivka 1 yard plunge that gave the visitors a 22-6 halftime advantage.

Coach Larry Frost's Parkview Christian troops then opened the 2nd half with a time consuming 14 play drive that essentially put the game away for the Patriots. Parkview drove it all the way from their own 15, eating up seven and a half minutes of the 3rd quarter before QB Polivka smashed in from the two to make it 30-6. The nimble, yet hard running signal caller added a 4th quarter, 7 yard TD run to make it 38-6 with 8:31 left in the game. Big Luke Erickson put one more score up for Osceola a couple minutes later with a defender smashing 29 yard scoring run to make the final tally 38-12.

As earlier mentioned, Nate Davenport led the way for Parkview Christian with his 175 rushing yards on 22 carries. Trevor Polivka added 47 yards on 14 carries and 3 touchdowns, while 190 pound RB Jeff Riesenburg added 40 yards on only 6 carries. The Patriots had 7 runners gain 10 yards or more in the team's total 334 rushing yards. QB Trevor Polivka connected on 6 of his 15 passes for 62 yards and had at least one of his passes dropped that could have resulted in a TD.

Osceola was led by Luke Erickson's 125 yards on 20 touches. Colton Kuhnel ran for 94 yards on only 9 carries, ripping of runs of 23, 14, 15, and 30 yards in the process. Erickson completed 5 of 8 passes but could only show 27 yards for it. Both quarterbacks suffered one interception each.

......and furthermore: Really good to see Parkview head coach Larry Frost and his able assistant Harold Simpson. Talk about two old pros. Last time I stood on a Larry Frost sideline, son Scott Frost was a Wood River junior. I think it would be a very even race if Frost, Simpson and yours truly lined up for a 20 yard affair. There may not be a finisher.

.....and a few notes: Nate Davenport is a nice powerful runner for Parkview Christian. Solid as a rock, Davenport is faster than you think, a sure fire 1000 yarder this season. And don't count out this Osceola team by any means. This is the same team that led Fullerton 32-26 at the half. Get Trevor Carlson back and this is a very dangerous squad against anybody in D-2.

....and one for the road: What a great setting for a high school football game tonight! Pristine grass field surrounded by tall pine trees on 3 sides. Kudos to the Osceola folks who take care of this facility. Your pride shows big time. It's always these small town football fields that look so beautiful and it's all volunteer help that produces these gems. Nice work.