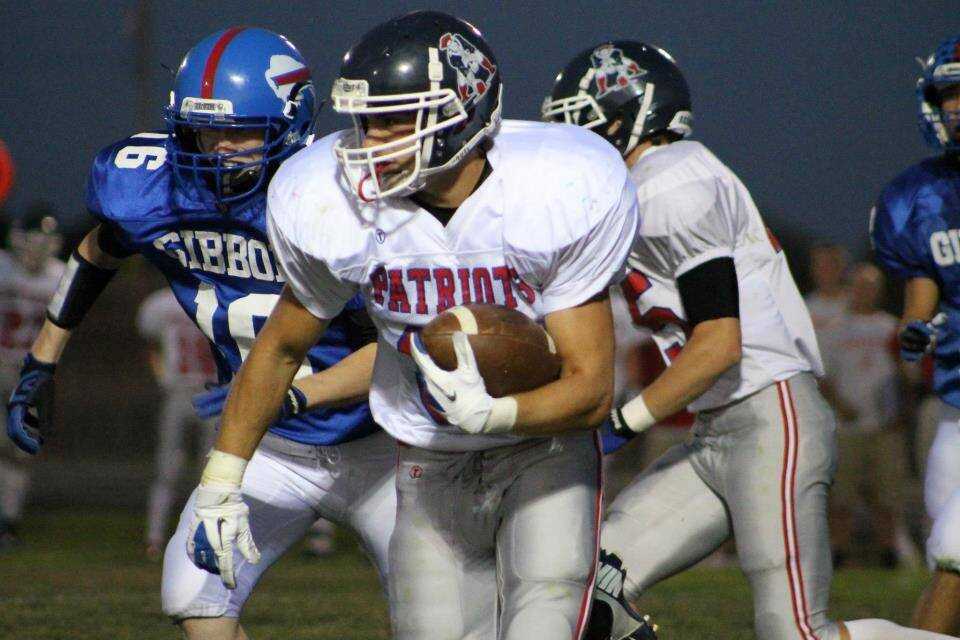 The Stars were out last weekend and there are many to salute. Wouldn't it be cool someday to see a coach or running back insist on having all their lineman's names listed? I know every great high school RB I have ever spoken with always gives credit to their line. Likewise coaches, but you can bet if I had the names of their line it would be in these blogs.

One of these days we'll do one of these blogs with the name of the star followed by the guys up front that open the holes. I need some help though.

Now, on to the Friday night heroes:

*Travis Hooper-Hyannis - I'm kinda thinking Arthur County wants to forget about Mr. Hooper after last Friday. The 175 pound senior turned the Wolves defense inside out with 410 yards on 28 carries and scored 7 touchdowns in Hyannis 64-45 win. Hoover also had 11 solo tackles and 20 assists on defense and accounted for 42 of Hyannis 64 points. Hoover might be the rushing king of 6-Man football to date with 805 yards in just 3 outings.

Jacob Morrill-Creighton - Continued his quest to reach a 4th 1000 yard rushing season in a 66-0 win over Emerson-Hubbard. Morrill ran for 226 yards on only 13 carries. He has 408 yards in two games.

*Calvin Strong-Omaha North - Shredded another defense with 274-16 carries. Scored 5 touchdowns in the route of Omaha Bryan. Brings his 3 game total to 688 yards rushing. They said UCLA was at the Bryan taking a look. Don't let this kid slip away Huskers.

*Drew Fitzsimmons-Omaha Westside - Backup RB scooted for 218 yards on 22 carries against Grand Island. Fitzsimmons scored on runs of 12, 18 and 2 yards in the 45-13 win. Drew ran for 86 yards on 11 carries in the 1st quarter alone.

*Tony Zoucha-Columbus Scotus - Had 9 carries for 141 yards and TD runs of 77, 29, and 5 yards in the 'Rocks 45-0 pounding of GICC. Scotus has tons of speed and are going to be a force to be reckoned with the next couple of years.

*Garrett Poppen-Giltner - Hampton was just what the doctor ordered for the Hornets. Big Garrett rambled for 161 yards on 9 touches and scored on runs of 45, 59 and 8 yards in the 50-6 route.

*Chet Hinton-South Loup - Provided the spark for South Loup in their 28-22 win against North Central. Hinton rushed for 186 yards on 28 carries to carry SL to victory.

*Robby Heesacker-Humphrey - 6-1, 160 pound back ran wild to the tune of 314 yards on 41 carries and four touchdowns in a crazy 84-50 win over Osmond. Heesacker also ran for five 2 point conversions and now has 488 yards after 3 games.

*Ben Lodema, Sam Palensky and Sam Isaacson-Raymond Central - In that 46-36 loss to Falls City Lodema ran for 157-22 carries and scored 3 touchdowns. Lodema also was 16 of 28 passing for 285 yards. Sophomore Palensky rushed for 126-24 carries and scored 4 times. Isaacson had 8 receptions for a fat 191 yards and 2 scores. I'll bet that field turf at Falls City is still smokin'. Stat keepers dream (or nightmare). Does the scoreboard still work?

*Trevor Matson and Colt Sis-McCook - It must have been their turn to run through a defense and GI Northwest was on the receiving end of the Bison running attack. Matson rushed for 158-16 carries and scored from 34, 5 and 16 yards out. QB Sis gained 122-19 carries and scored a TD in the 41-13 win.

*Jordan Slough-Doniphan-Trumbull - Got untracked against a very fine Blue Hill team by running for 176-24 carries. A 2000 yard rusher a year ago, Slough scored on a 58 yard run and a 53 yard pass from Riley Wiltfong. Slough also pirated a Blue Hill pass to set up another score in the 34-14 win.

*Keithen Drury-Blue Hill - Tough running, shifty junior ran for 110 yards on 10 carries in a little over One Quarter in that Doniphan-Trumbull game. Drury went out with a knee injury and is awaiting news on the availability of his return. This lad is really good and Blue Hill's line is superb.

*Jake Skeen and Jake Rickert-Wood River - The Jakes had their day in Wood River's 40-7 win against Superior. Skeen ran for 165 yards and 2 scores and Rickerts rushed for 123 yards and also scored twice.

*Garrett Zwieble-Morrill - Sophomore QB ran for 121 yards on15 totes and scored 2 TDs in the Lions 48-8 win over Crawford. The 150 pounder also completed 7 passes for 117 yards and three more scores. Great to see the Lions doing well.

*Buzz Niederklein-Adams Central - What a back! The Buzzer ran for 163 yds on32 carries and scored both TDs in the Patriots 17-0 win at Wilber-Clatonia. Niederklein has rushed for 365 yards in just two games. Niederklein is faster than you think and tough as nails.

*Logan Lewis and Chance Anglin - The Red Raider Rippers did it again against Chase County. Lewis ran for 161 yards on 32 tries and Anglin dented the Imperial "D" for 187 big ones on 25 carries and 2 TDs. In 3 games Lewis has 574 yards and Anglin has 540. The Red Raider Rippers travel to Aurora this Friday. Can the Huskies stop these two "Rippers" or will Lewis and Anglin chew up Aurora's new field turf? Another sleepless week for the 1000 Yard Guy.

*Luke Gifford-Lincoln SE - Husker recruit returned from an injury to lead the Knights to a big win over Millard South. Luke ran for 125 yards on only 11 carries and scored on runs of 54 and 61 yards in a short span. That'll kill ya.....he could play on my team.

*Brock Reichardt-Aurora - Ran for 118 yards on 24 carries, scored a TD on a short run, kicked an extra point and actually called a play himself that helped the Huskies beat Seward 25-10. The play Reichardt called featured him tossing a 24 yard HB touchdown pass to Allen. Reichardt also plugged the middle of the Huskie defense from his linebacker slot. Quite an evening. Now he gets to try and stop the Red Raider Rippers.

*Cody Beckman-Bloomfield - 180 pound junior ripped Pender with 257 yards on 40 carries as the Bees stung the Pendragons 60-46. Just a week ago Beckman rushed for 233 yds against a good Hartington squad. They know how to raise those 1000 yard runners in Bloomfield don't cha know.

*Ethan Skinner-Hemingford - Junior scooted for 211 yards on 20 carries and scored 3 times as Hemingford beat a tough Garden County team 50-16. Skinner had 1,143 yards as a sophomore a year ago and this Hemingford is STILL young.

*Jessup Workman and Reece Gronewald-Beatrice - Duo shocked York by combining for nearly 400 yards rushing in the Orangeman's 38-20 win in York. The powerful Workman (6-0, 200 lbs) rushed for 199 yards on 34 carries and scored 3 times. Gronewald rushed for 177 yds on only 13 carries and scored twice. Workman now has 566 yards in 3 games and Gronewald, after running for only 54 yards in 2 previous games, now has 233. Beatrice had to pass only twice in the game, completing both.

*Nick Valla-Ord - In case you haven't noticed, Valla is the real deal. Nick punished Central City with 199 yards on 19 carries in the Chants 31-7 win. Valla had a 46 yard touchdown run in the game.

*Patrick Herman-Hastings St. Cecilia - Rushed for 134 yards and scored from 17, 4 and 5 yards out as the Bluehawks beat Ravenna 28-6 at Hud's house. Can Tez's boys give district foes Sutton and Doniphan-Trumbull a run for the money this season?

*Jackson Love-Norfolk Catholic - Toughest back in C-1, Love ran for 189-22 carries in the Boone loss. Jackson has rushed for an incredible 683 yards in 3 games this season.

*Zach Zeplin-Omaha Skutt - Check this out: Zeplin had 4 receptions for 125 yards and caught TD passes of 8 and 57 yards in a huge win over Elkhorn South. The big deal is that Zeplin had 125 of Skutt's 148 receiving yards. Main target?

*Nick Stolze and Shaka Taylor-Lutheran High NE - In a 41-8 win against Wisner-Pilger Stolze rushed for 168 yards on only 8 carries and scored on runs of 50, 1 and 64 yards. The dreadlocked Taylor darted for 124 yds on 16 totes and ran it in from 40 yards out. This is the same duo that tore up a solid Fremont Bergan defense a week ago with Stolze running for 198 and Taylor for 126 yards. I saw Bergan beat Aquinas Saturday, and believe me the Knights have a good "D". That Taylor can shake and bake baby.

*Logan Gier-Omaha Burke - Gier ran for 145 yds on 18 carries and scored form 46 yards out as his Bulldogs knocked off #1 Millard West. Gier is a scooter and can also shake it and bake it with the best of 'em in the Metro.

*Josh Coyle-Atkinson West Holt - Super back had 167 yards on 10 carries and scored 3 TDs in limited action in the Huskies 48-6 route over Twin River. Might be another short stint for Coyle this Friday too.

*Trevor Carlson, Colton Kuhnel and Luke Erickson-Osceola - How about 3 backs over 100 yards for the orange and grey in Friday's Cedar Valley 44-18. Carlson ripped 'em for 191-8 carries. Kuhnel ran for 105 yards on 20 tries and Erickson had 115-28. One would assume Osceola didn't pass much...Duh.

.......and finally: Sutherland football team: The Sailors ended a 21 game losing streak by hammering Dundy County/Stratton 66-42. Quarterback Tyler Fear rushed for 214 yards on 18 touches and was 7 of 16 passing for 132 yds. Fear scored on runs of 14, 37, 34 and 17 yards plus threw TD passes of 43 and 8 yards. Doesn't it feel good guys! Three cheers for the Sailors, they're sinking ships again.