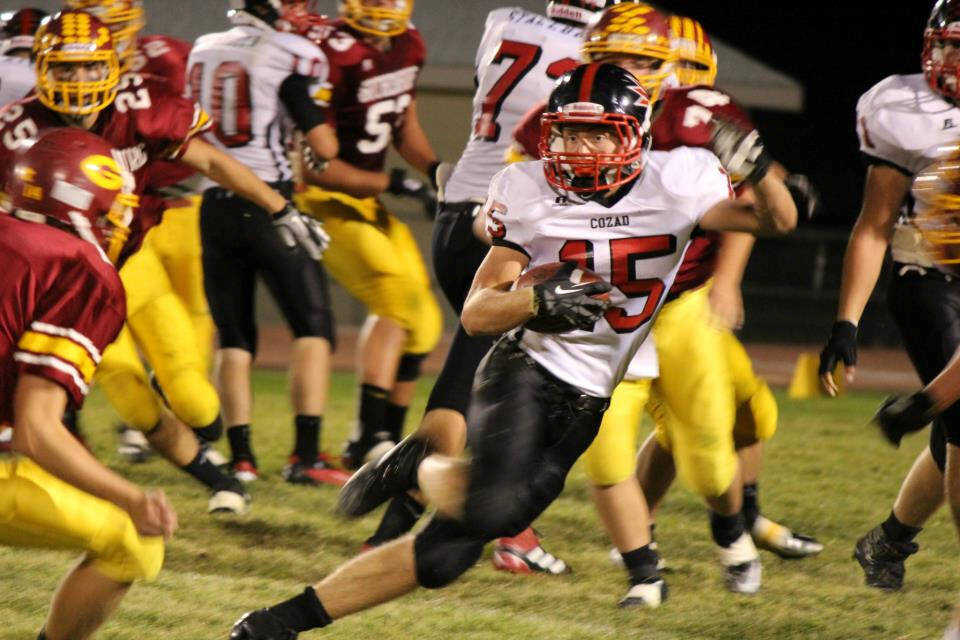 Cozad recovered from the loss of their leading tackler and a 7-6 first quarter deficit to score an impressive 34-14 win over a traditionally talent rich Adams Central team Thursday night in Cozad. The Haymakers unleashed shining star Jake Paulsen and some solid line blocking to post a notice to the Class C-1 field that this squad will be a force in 2013. The lightning bolt that wears number 15 for Cozad rushed for 275 yards on 18 carries and scored 4 touchdowns to pace the Haymakers on an opening night that only the football weather gods could have fashioned. Adams Central had it's own standout in running back Buzz Niederklein, who paced the Patriots with a staggering 27 carries on this season debut. Niederklein blasted his way through the heart of the Haymaker defense for most of his 197 yards, including a dazzling 84 yard touchdown that gave AC it's only lead. But the Haymaker defense tightened when it counted, stuffed the Patriot air attack, and laid the groundwork for a season to remember.

Defenses ruled the opening game first quarter as witnessed by each team cashing in on only one out of their 4 possessions. Cozad struck first when QB Nate Bubak rolled left and lofted a 61 yard touchdown strike to the fleet Paulsen. Two plays later Niederklein bobbled a pitch momentarily and the juggling act distracted the Cozad defense just long enough for the power runner to find a crease and sprint 84 yards to paydirt.

Cozad ruled the 2nd quarter with Paulsen escaping for a 46 yard sideline dash for the first score. The next series featured a spectacular 44 pass play from a scrambling Bubak to 160 pound junior Conor Young that went to the Patriot 3 yard line. Paulsen blasted through on the next play to score, then Bubak nailed Strong streaking from right to left for the 2 point conversion. That was not Young's first circus catch. On the series prior to the 44 yard grab, Young made an outstanding catch leaping above a defender who was 6 inches taller. However, the ball was stripped out of his hands on the way down and Adams Central momentarily averted a score by Cozad.

The Haymakers made a statement immediately in the second half which may have sealed the deal.

After Adams Central was forced to punt on their opening 2nd half possession, the Patriots pinned Cozad deep in their own territory at the 10 yard line. But on the first play Jake Paulsen fielded a pitch, took a few steps to his right then saw a slight crease between his right guard and tackle. Jake the Snake then slithered through the hole, broke left, then cut back right all the way to the A/C sideline and turned on the Paulsen jets for a spectacular 90 TD run. Tysen Werner booted the point through and the Haymakers had a 27-7 lead just 3:56 into the 3rd stanza.

On the Patriot's next possession, Niederklein was mobbed for no gain on a third down play when the ball was jarred loose. The pigskin took a perfect bounce into the "designated" hands of Conor Young who was all alone on the Haymaker side of the field. Young scooped it up and sprinted 46 yards untouched for what proved to be the clinching score. Cozad led 34-7 after three quarters.

Adams Central finally got the passing game to work after 5 straight incompletions and put a 4th quarter touchdown on the board. Buzz Niederklein did the honors with a 3 yard plunge to make the final count 34-14.

Other than allowing Niederklein's 197 yards, the Haymaker defense was solid despite the loss of #32 Jacob Rush early on. The 180 pound senior suffered what appeared to be a knee injury as his leg was wrapped from above the knee all the way to the ankle. It appeared his status for the next few games could be in doubt. Cozad's Nate Buback completed 5 of 11 passes, but those 5 tosses were good for an eye popping 194 yards, 112 of those going to the speedy, nimble Conor Young. The Haymakers rushed for 303 yards leading to a total yardage mark of 497 for the game. Other than the splendid Buzz Niederklein, the Patriots rushed for only 28 yards giving them a total rushing mark of 225 for the game. QB Dylan Steinkruger completed 5 of 12 passes for 38 yards, 36 coming on a 4th quarter drive. Adams Central had 263 total yards for the contest.

...Thoughts: Typical first game mistakes dominated this opener, and the loss of a dynamite senior class and only 2 returning starters made things difficult for Adams Central in this opening contest. This team will improve as the season goes along because Bill Carlin and his staff are as good as it gets. As for Cozad, what a victory for first year coach Brian Cargill. Cargill coached these seniors when they played Freshman ball for the Haymakers so this team knows and likes Mr. Cargill and his ideas. Jake Paulsen....what can you say? Honestly, on 15 of his 18 carries the crowd just held it's breath because of his ability to break one at anytime. If Paulsen stays healthy, a 2000 yard rushing year is a strong possibility. Bubak has a nice arm and Conor Strong proved his worth on both sides of the ball. The Haymaker offensive line did the work for Paulsen and the D-LIne and linebackers, especially players like tough Alex Boryca (#34) were headhunters. And believe it or not, Jake Paulsen seemed even faster and more patient than a year ago. By the way, Paulsen had 169-14 carries in the first half, and had only 4 touches in the second half, good for 106 yards.

....and furthermore: So, after tonight, viewing my 3rd game, I will have seen what I believe to be the top SIX teams in C-1. We will make the trip tonight to tiny but proud Petersburg, where they haven't staged a varsity football game in 13 years. We will watch Boone Central/Newman Grove and Pierce. Boone's fabulous new athletic complex will not be finished until the October 4th home game, precipitating the move.

If you haven't had the chance to see Jake Paulsen play, you are missing something. And to see Buzz Neiderklien and Paulsen standing at mid field next to me after the game exchanging best wishes, was a sight to see.....two of the best backs in C-1. I like Niederklein's parting thought: "We'll see you guys again, nice game". You just have to think that way don't you?

Cozad sported a Red "C" on their blazing black helmets and some of the wise old Haymaker historians say the last time Cozad had that emblem on their helmets they won a state title. They were removed the next year after a disappointing loss and not worn until this night. Prophecy?

Omen of what is to come for this team in 2013? You never know, but if you are a Haymaker.....ya gotta believe.