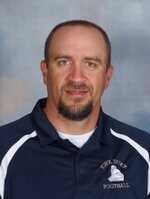 On a balmy, humid, almost dead still opening night in York, Class B pre-season #1 Norris ran into an unrated York squad and found the Dukes passing game to much to handle. York's sharpshooting senior quarterback Linden Kaliff went to the air early when the Dukes found Norris' front four difficult to penetrate with the run game. A close first half turned into a York controlled 2nd half that ultimately led to a 35-9 win for the Dukes.

The big news going into this game was the absence of Norris quarterback/linebacker Jakson Reetz. Reetz is playing in Taiwan for the USA 18 Baseball team and was slated to miss the first two football games for the Titans. But York was also missing one of their key players, Ronaldo Trevino for disciplinary reasons. Despite the absence of these two stars, there were plenty of good players to make this an interesting match-up.

The first half was a see-saw battle, that saw York go to their passing game early. Senior quarterback Linden Kaliff was splendid, throwing for 150 of his 232 yards in the first half on 6 for 9 accuracy. The Dukes scored on their 3rd possession of the opening stanza when Kaliff hit all-state basketball man Ty Danielsen with a 40 yard Td strike. Danielsen made a sweet move at the Norris 20 and danced the rest of the way for six. Norris answered right back, eating up the final 4:37 with quarterback Grant Albers blasting the final 3 yards. Albers, filling in for the absent Reetz, did a fine job running the football all evening against a stingy York "D". The Titans rarely passed a year ago and is without a doubt a "run first" offense.

York's hard running Evan Neville scored from 2 yards out to give the Dukes a 14-6 lead midway through the 2nd quarter, but Norris fashioned a 15 play drive that featured Albers rambling for 44 yards. York stiffened at the 4 yard line and Ryan Bellinghausen nailed a 27 yard field goal to cut the lead to 14-9 at the half.

The Dukes capitalized early in the second half when the ball was jarred loose from Norris running back Ryley LaVene at the Norris 38. It took the Dukes 8 plays to cash in with Jonah Otte going the final 5 yards for the score, making it 21-9. A Duke possession later, Norris was given a golden opportunity to get back into it when QB Linden Kaliff was separated from the ball at his 26. Norris pounced on it at the Duke's 17 yard line with 3:09 left in the 3rd quarter. But a couple of penalties, a sack and some fierce York defense, the Titans ended up back at the York 31 and the momentum switched back to the Dukes for good.

The very next possession, the York line provided a nice opening for the tough running Neville, who sprinted 37 yards for the back breaking touchdown. The Dukes added another score at the 4:05 mark of the 4th quarter when Jonah Otte added his second TD of the humid might on an 8 yard scamper. Senior Ryan Dolan converted his 5th extra point of the evening to seal the 35-9 win for York.

Senior QB Linden Kaliff was a sparkler for the Dukes. The 165 pound senior finished the game completing 11-15 of his passes for 232 yards and a score. Kaliff has one of the best arms in Class B. A year ago he completed 119-206 passes for 1,594 yards, so this kid can put it up with very good accuracy. Tough running Evan Neville led all rushers with 119 yards on 20 carries. The Norris ground attack churned out 190 yards and was led by senior Ryley LaVene's 89 yards on 16 carries. The Titan's alternated backfields every other possession (excepting QB Albers) but it's Maryland I was certainly missing three year all-state 1000 yard rusher James Kruger, who graduated. LaVene exited early in the 3rd quarter and did not return, leaving the bulk of the running game to quarterback Grant Albers. Albers gained 59 grueling yards on 16 carries, often times absorbing tough hits by the York defense. The Norris air game only produced 36 yards on 5 of 10 passing. I did think Albers did a nice job filling in for Reetz overall though and I especially like LaVene's patient running style. He just crept though the hole and kicked it into high gear when he needed it. LaVene could be a 1000 yard rusher if he gets enough rushing attempts.

Next week York will travel to Lexington, who dropped a close 15-7 game to Scottsbluff on Friday. Norris will again be on the road next week when the Titans go to Schuyler. The Warriors were thumped pretty good by Columbus 45-9 Friday.

Do not count out this Norris team by any means. The Titans were hit pretty hard by graduating some key skill players, but did return some awfully tough defensive folks. Reetz will return for game three and that will change things big time on both offense and defense. Don't forget Reetz was an all-state linebacker so that middle may not be as open as the York receivers were. There aren't too many coaching staffs that boast as much experience as Norris, and with the addition of John Farrand, it gets even better.

York is the real deal and Class B is wide open in my opinion. Glen Snodgrass has pumped football exitement back into the community and knows the game well, utilizing his talents to the fullest extent. Potential all-state lineman Ronaldo Trevino also returns for game three so that Duke defense will be more solid and the pass blocking should improve as should the holes for the running backs.

Both of these teams will be in the hunt come playoff time.

How this York squad was overlooked in the pre-season ratings is a mystery to me, but I'm betting that coach Glen Snodgrass is just fine with that fact. It seems this York team flew under the radar the entire season a year ago, but when the Dukes made the long trip to pre-season favorite Scottsbluff and came away with a resounding 28-9 win, a few of the naysayers took notice. What convinced me that these Dukes were the real deal was the game they played against an awfully good Mark Wortman coached Elkhorn team in the second round. York was edged by the Antlers 10-7, but played toe-to-toe with them and really were just a dropped pass away from winning that game. Physically, York had equaled Elkhorn that night, and with a great nucleus returning for this fall, how the Dukes could be overlooked in those pre-season ratings is baffling.