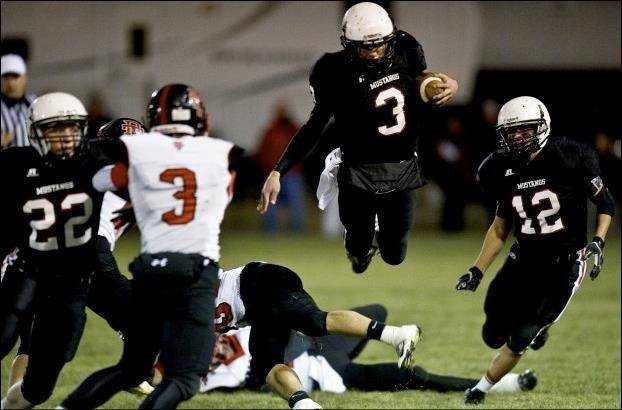 If you like to roam around in the fall searching for a great high school football game, here is a list of players you might just want to add to that bucket list you have just started. There are a few of these stars I have been waiting for an opportunity to see for 2 years. You just never get to see 'em all live before their high school careers are history. Thanks goodness for HUDL.

Here is the first installment of players to put on that "must see" list. This will take more than one blog to cover them all.

Josh Coyle-Atkinson West Holt - (5-11, 190) (#10) - This multi-position player is one of the premier backs in the state, regardless of class. Coyle, already a two year C-2 All-State RB, has rushed for 3,588 yards and scored 56 times the past 2 seasons. Fun thing about watching this kid is that West Holt runs so many different offensive sets to showcase his talents. #10 has scored from almost every conceivable place on the football field. Coyle might line up under center as a QB, dot the "I" in the "I" formation, or line up on either side of the line when the Huskies run out of the Wing-T. Josh Coyle is also a dangerous passer or receiver and can kick the ball a mile. He is an outstanding wrestler and uses that strength, along with his state track speed to punish defenses. Not a slasher or a cutter, just a great vision back who follows his blockers and knows when to turn on the jets and he has plenty of rocket fuel when he needs it.

Jordan Slough-Doniphan-Trumbull - (5-10, 185) (#3) - Slough is this year's version of a "Dancing With The Stars" champion. A cutting, slashing, darting, patient back who looks like he's dancing when he runs. In the words of Barry Switzer "he runs like smoke slithering through a key hole". Slough benefitted from a terrific line and honestly some of his runs caused me to lose a nights sleep just replaying them in my head in my bed. One of the fastest off the mark you'll ever see, Slough hits the hole faster than a slew of freshman heading for the lunch room. Slough ran for a whopping 2,274 yards a year ago and took a beating in the process. More amazing is the fact he didn't even play his sophomore season due to some transfer confusion. Slough won't have quite the line this fall, but the fact the Cardinals have one of the best passers around in Riley Wiltfong should keep defenses off balance enough to present Slough with another shot at a 2000 yard season. DO NOT miss seeing Jordan Slough.

Calvin Strong - Omaha North (5-9, 175) (#5) - Super Soph pretty much describes this guy. Strong, whose father Calvin was a stellar Metro athlete a few years back, may have run under the radar the first 3 games last season, but it didn't take long for opponents to know who #5 was. Strong's favorite back is Reggie Bush and the smooth but powerful Viking back certainly plays like a junior version of the former USC star. Strong ripped through the best defenses in Class A for 1,892 yards in 2012 and every opposing coach who watched him has high praise for this kid. Very powerful for his size, Calvin Strong (Jr.) can cut on a dime and go in a hurry, leaving his defenders grabbing nothing but air. Yards after contact are very commonplace for this kid and Strong probably hits the hole as fast as any back in Nebraska's biggest class. Division one recruit........take it to the bank and make the trip to Omaha to see this guy. Maybe the best sophomore runner in the Metro's long proud history.

Austin Rose-Lincoln North Star - (6-0, 210) (#23) - Lincoln pharmacies could'nt have had enough aspirin to cure defender's headaches last fall, especially those who tried to tackle Rose one on one. This guy is not a pile driving fullback, just a tailback whose frame resembles a FB. Don't let that fool you. Rose can punch it up the middle, but can bounce outside and get to the corner in a hurry with a full head of steam. #23 looks like a runaway Mack truck ( a fast one) making a beeline to the promised land. Rose wasn't even supposed to start a year ago but when Mike Minter fizzled out on his senior season, Austin took over and made opposing teams wish Minter was back. Rose has a good line to block for him this fall, including D-1 prospect Matt Deitz (6-3, 300) and a blockbusting fullback in Bryan Johnson, who gained 832 yards himself. You may have a chance to see Rose and his Gator teammates go deep into the playoffs in 2013. Austin Rose could be a D-1 player before it's all said and done, and maybe already is there.

Jake Paulsen-Cozad - (5-11, 170) (#15) - Rushed for 2,761 yards and 40 Tds the past two seasons and has been one of the premier sprinters in the state since his freshman season. To be truthful, the knock on most premier sprinters is that they are not physical enough on the football field. No wives tale, it has been witnessed many times over the years, but Paulsen has run tougher as the years progressed and now, with a veteran line that goes 205, 255, 250, 230, 240 and 220 from side to side, Paulsen can run like the wind inside or out and deliver a hit when he needs it. Paulsen is not a slashing, darter, but can gracefully glide and go from stop to go in a heartbeat. If he gets the corner, kiss it good-bye. This could be the Haymaker's year with that line plus Paulsen the Phantom and remember, 2000 yard rushers at Cozad high school are nothing new so Paulsen just may as well add his name to the list.

Jacob Morrill-Creighton - (6-0, 185) (#2) - Nothing fancy about this guy except for the fact he is one of only 5 freshman in history to rush for a 1000 yards and can become only the 3rd runner in history to compile 4 thousand yard rushing seasons. Morrill has been blessed with a great line each of his previous 3 seasons and a team that just knows how to win. #2 always seems to come through in the clutch it seems and one of Morrill's bread and butter plays is hitting the line, bouncing off, and blasting to the outside. Mistake most teams make against Creighton is playing their defense too tight because all Jacob Morrill needs is one solid block in that D-line and he is gone. And "Goin For Number Four" this season will be sweet because Morrill has 3 solid senior lineman opening the way in Lane Jacobson, Ian Futchman, and Seth Wilmes. This young man has already played in one state semi-final and one final in just three seasons.

Cole Wiseman-Sutton - (5-11, 180) (#3) - Simply put....Pure football player. Where do I start with Wiseman? Mustang coach Steve Ramer is as high on this young man as I am. Wiseman, who may well be the best option QB in the state below Class A, is the type of player that loses almost no foot speed when he puts on the pads. A quick, patient runner, Wiseman gets to the hole in a hurry and can hit high gear in an instant. Wiseman's dedication in the weight shows through when he displays the ability to turn on the jets when he makes contact with a defender, driving for those extra yards. I also haven't seen too many high school players with the ability to use almost all of his moves at full speed like Wiseman does. This kid understands Sutton's offense so well and runs it to the point almost nobody can stop it. On defense, he is a terror, picking off 4 passes last season and making bone jarring tackles from his LB position. Wiseman rushed for 1,862 yards last year, yet his passing numbers...29-48-727 yds and 8 tds, were enough to drive defenses crazy. I can guarantee you Wiseman and his Mustang buddies want another shot at the mighty Aquinas. Love to watch this kid play. You have to make the trip to Sutton in 2013.

.......stay tuned for the 2nd installment of "Must See Players" coming up tomorrow.