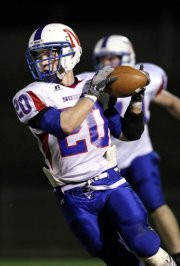 For more than a quarter and a half it looked like two heavyweight fighters exchanging punches, but in a matter of 4:35 seconds and a couple of timely, costly 15 yard Aurora penalties, Norris scored twice and never looked back. The hometown Huskies, who were enjoying a resurgence since an early October 54-0 loss to Grand Island Northwest, had only 5 penalties in the contest but 3 were of the 15 yard variety. Norris turned all three into game changing touchdowns as the Titans swept to a 51 -13 win and advanced to the Class B State Championship game November 20th at Memorial Stadium in Lincoln. The last time Norris won a playoff game was in 1979 and they won 3 that year culminating with a 20-19 win over Plattsmouth that gave them the Class B title. Norris Coach Jim Jacobson told me before the game that his team was in relatively uncharted waters reaching the "B" semi finals this season, but after this resounding victory I dare say the Titans are calming those waters and doing some mighty fine smooth sailing.

Aurora entered the game with some key injuries, but none was more glaring than the absence of starting senior quarterback Troy McDonald. McDonald entered the field on crutches after cracking an ankle in the Huskies quarterfinal win at Beatrice. McDonald was replaced by junior Luke Standage for this game and it was Standage who was instrumental in the Beatrice win, throwing for late touchdown that iced the victory. But on this night it was the "un-Aurora-like" 15 yard penalties in the 2nd quarter that changed the momentum for good and turned a close Class B semi final game into a route for Norris.

Norris kept their game opening drive going when Aurora was called for having too many players on the field after the Titans punted on a 4th and 5. Norris eventually scored on a 10 play, 4:20 drive to take a 7-0 lead. After the teams traded scores twice, the Huskies were flagged for a roughing QB Jakson Reetz as he attempted to punt. The infraction moved to ball from the Norris 35 to midfield. After the Titans were moved back 5 yards for an offside penalty, all-state running back James Kruger carried 12 yards to the Aurora 43, but the Huskies were accessed a 15 yard personal foul after the play. Kruger then blasted up the middle for a 28 yard touchdown and Norris had a 21-3 lead. Norris held Aurora to a 3 and out then fashioned an 8 play drive with only 1:37 left in the half. Jakson Reetz then nailed A.J. Flodman for a 9 yard TD pass with just :12.4 left in the half to take a 28-13

The Huskies never recovered and James Kruger was just starting to roll with 128 yards at the break.

Norris scored a couple of touchdowns in the 3rd quarter on 5 and 24 yard runs by the incredible Kruger and built a 42-13 lead by the end of the 3rd. Junior kicker Ryan Bellinghausen kicked a 29 yard field goal early in the 4th quarter and speedy, hard running fullback Nick Davis capped things off by exploding though the Aurora line for a 59 yard power dash for the final score. The 225 pound Davis shook off several tacklers then did some finesse, angle running to finish off the impressive scoring run. Norris relied on the punishing running of James Kruger in the 2nd half, as the three time 1000 yard rusher followed the crisp blocking of his superior "O" line en route to 224 yards on 33 carries.

The Huskies just could not get things going in that 2nd half despite some nice long throws by Standage, who will be an outstanding quarterback in 2013. The Norris defense was relentless all night, especially in the second half when Aurora was forced to the air. In fact, Norris was outstanding of defense in their domination of Gretna last week and it appears they just got better in this contest.

Talk about peaking at the right time.

Norris carries a 10-2 record into the Class B title game against Omaha Gross, who stunned Elkhorn 14-7 on a 74 yard return of a squibbed kick by tight end Jacob Johnson. James Kruger's 224 yards rushing on the night swelled his season total to a Class B leading 2,179 yards. Big FB Nick Davis added 87 yards on only 6 carries for the Titans. Aurora's tough running junior Brock Reichardt, who had been slowed this season by a hip flexor, gained 111-15 carries. Norris QB Jakson Reetz was an efficient 4 of 5 passing for 61 yards and a score. Norris 240 pound lineman Jake Bornschlegl even caught a pass after a tip and rambled 4 yards to keep a Titan drive going. Aurora's Luke Standage was 9-21 for a 69 yards and had an interception.

It's been a playoff run to remember for Norris, who beat McCook 26-21 and Gretna 28-7 and now Aurora 52-13. The Titans seem to be rolling to better things as each game passes and are poised to grab their first state title in 33 years.

We'll find out in 10 days if this magic Norris ride continues.