"Coyled" and ready to Strike. 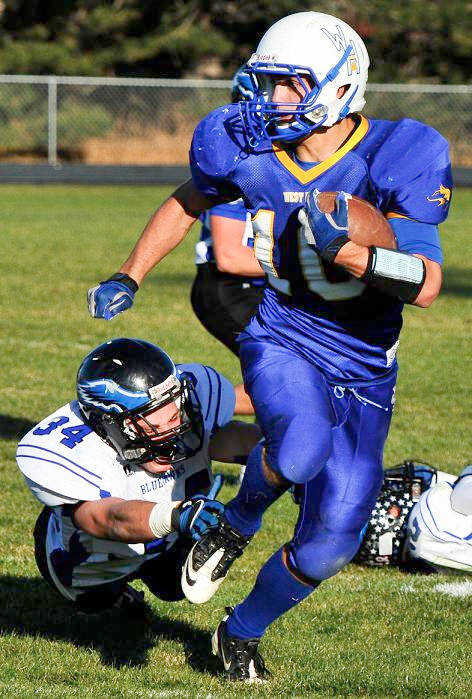 When you've watched high school running backs for nearly 50 years, it is realtively easy to spot a exceptional athlete in a heartbeat. But there are lots of things to consider on the drive home after the game: If you saw this young man again, would he impress just the same as the first? How would he look if you viewed a season's worth of games on the DVD player? Would he do as well with a less talented line? Better with a stronger line? How would this kid look against better competition? Does he create things after he gets past the line of scrimmage?

Well, what if, just what if this athlete performs at an incredible level game after game after game, regardless of who he faces? Plays several different positions in several different formations? Plays on defense and special teams. Is the focal point of every defensive coordinator he plays against. It is a rare find indeed when you find a shining star like this, but a junior out of Atkinson West Holt named Josh Coyle just happens to fit that description........like a glove.

You know a high school football player is getting some serious attention when more than one opposing coach issues a statement that goes like this: "when you play West Holt, you merely try to slow down Josh Coyle." May as well concentrate on stopping everything else because Coyle is going to get his yards and hurt you from somewhere on the field at some point in the game." You just have to know where number 10 is at all times."

They say that no high school athlete really flies under the radar these days with all the resources available on the Internet. But much depends on the facts a coach or school wishes to release, and if a high school football player is just a sophomore and starting for the first time, it is not odd for a running back like Mr. Coyle to fly under rader. Living in a town that is in northeastern Nebraska, far from the reaches of Omaha.....235 miles worth. Over 120 miles from Grand Island, matter of fact. You get the picture. So, last season, Josh Coyle "quietly" ran for a cool 1,729 yards as a sophomore. Only one back in Class C-2 was better and that was Tom Peitz of Crofton, who just happen to lead the entire state in rushing with 2,138 yards as a senior. So is Coyle still running undere that radar this season? As astounding as it may sound (or stupid)....yes.... in some Eastern Nebraska circles. And that may just suit Mr. Coyle and his West Holt buddies just fine.

Check these 2012 game by game statistics:

What Josh Coyle does on the football field would take a week to describe. On defense, Coyle is ranked third in C-2 in tackles, 57 unassisted stops and 21 assists for 135 tackle points. He is in the top 20 in punting and it's prayer meeting time if he drops back to receive a punt or kick-off. What causes nightmares and sleepless nights for opposing coaching staffs is what this marvelous player does on the offensive side of the ball. I swear West Holt coach Steve Neptune has as many formations as my friend former backfield buddy Carl Tesmer of St. Cecilia has in his thick play book. Coyle may line up as an I-back in that Huskie I formation. He just might take the direct snap out of the Wildcat set, or be the quarterback in a Crofton type tight double wing formation. Then again he may call signals in a wide double-wing set. On occasion, Coyle might just be the wing man out of that double wing.

And West Holt has an offensive set I have never seen before. Looks like an offset, crooked "U" formation with Coyle standing right next to the QB....or perhaps he IS the quarterback. Better be on your toes or he jusy may roll out and throw a pass out of that, or any other formation the Huskies have. If he happens to line up deep in punt formation, your guess is as good as mine as to what Mr. Coyle might do. Run, pass, rugby style punt at the last second? Starting to get the "nightmare/sleepless night" symptoms that opposing coaches might be suffering from? And don't worry about spilling all the secrets West Holt's offense has to offer......it's all out there on tape for the state to see. Problem is stopping it.

What is clear as crystal is the fact that the Huskies are in the most brutal district in C-2. Yes, Coyle has been posting theese numbers against teams like Lutheran High NE (7-0, #3 in C-2 World-Herald ratings), Wakefield (5-2), Hartington CC (3-4, but playoff bound), and Battle Creek (3-4 and playoff bound)...and this week the Huskies close at 6-1 Crofton, who is 5th in the C-2 ratings. In fact, all of the teams in West Holt's C-2/6 district should qualify for the playoffs. In addition to Lutheran High NE, Hartington CC, Battle Creek, and Crofton West Holt should make it to the post season.

So, how would describe Josh Coyle as a runner? Simply put, Coyle is an extremely intelligent football player. Number 10 is a glider when he gets the ball, able to follow his blockers with uncanny patience, ready to "UnCoyle" with that burst of speed that will propel him past a defender or two. One place you do not want Josh Coyle to set sail for is the outside. On more than one occasion I have witnessed this guy take off for the weak side and what seems like just a sliver of daylight is enough for him to slither around and kick in the jets, outrunning the defense for a score.

Coyle's 11.1 hundred meter speed seems more like a :10.6/Jake Paulsen type rocket burst to me. And you want to send him up the gut? This kid packs a punch when he delivers a blow and has the ability to rebound from the initial point of contact, using his extraorinary balance to keep his footing and continue on his path to the end zone. There are not too many instances when Josh Coyle will be caught from behind and I'm betting that he will be the first to give credit to his offensive line, which has done an outstanding job this season.

Josh Coyle is just one of those rare athletes that comes along once in a lifetime in a town like Atkinson. Coyle carries a perfect 4.0 GPA and is ranked number 1 in his class. He was an all-state C-2 RB in 2011 as a sophomore, picked up a 4th place medal at the State Wrestling Championships in Omaha both his freshman and sophomore seasons. Coyle qualified for state in track in both the 100 and 400 as a freshman, and averaged 13 strike-outs and batted .400 for his Legion baseball team. Josh is also involved in his local FFA chapter and is a class officer at West Holt high school.

I can tell you with absolute certainty what I will be doing Saturday morning around 11:00 when the NSAA releases the playoff parings.......checking to see where Atkinson West Holt is playing in the 1st round of the Class C-2 bracket. Then it will be time to get the old silver clipboard packed and head out to watch number 10 get set to "UnCoyle".