The Magic Season is upon us. 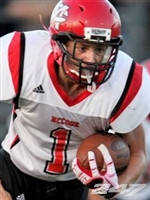 Can you feel it? The 2012 high school football is less than one week away and the heartbeat is starting to rise. This fall the gridiron season will start the earliest in recent memory with Week Zero getting under way next Thursday, August 23rd. Four games will kick off the 2012 campaign on that Thursday with Fremont visiting Lincoln East in Class A, Gretna will play at Omaha Skutt Class B. In Class C-1 Lincoln Christian is at Boys Town and Bloomfield will travel to O'Neill St. Marys to get the 8-Man (D-2) season underway. All Class A and Class B teams will start next week to accommodate their 9 game schedules. Anybody below those two classes will have the usual 8 game slates, as usual

I remember, as a youngster, waiting for the final week of the season in college football for all the rivalry games to come around...Nebraska-Oklahoma, Texas-Texas A & M, Alabama-Auburn. Well, in Class A, they hit the road running with those rivalry match-ups right off the bat. Try these on for size...Bellevue East-Bellevue West, Papillion LV-Papillion LV South and Millard North-Millard South.

They may not be rivalry games at Seacrest Field in Lincoln next Friday, but you couldn't ask for a better quality double-header than is on tap for that day. How about Millard West-Lincoln Southeast under the sun at 4:30 followed by Lincoln North Star-Lincoln Southwest at 8:00...Wow!

With the realization it's only just the opening game of the season, the showdowns between Millard North-Millard South and Lincoln SE-Millard West could still have far reaching consequences for the losers. On the other hand, all four of these squads are talented enough to absorb s loss and still bounce back to have a very successful season. Most coaches will agree that if you have to have a loss, get it out of the way early. In Class A you can get away with a few losses, but in the lower classes with one less regular season game, more than a couple could be damaging.

Here is a glance at a few of the dandies on tap for Week Zero:

Well, Kirk Peterson's Wildcats will find out what they're made of in a heck of a hurry, taking on defending state champion Southeast. The Knights are loaded this fall and are are pretty much the consensus to repeat as the Kings of Class A. With players like QB-Najee Jackson, high stepping runner Devin Washington, plus receivers Desmond Robinson and Devonte Matlock, the Knights are a deep football team with valuable experience. They are very solid where it counts too, and that's in the trenches. Millard West will counter with one of the state's most versatile, exiting players in Ross Drwal. The 6-2, 190 pound dynamo scored in almost conceiveable way a season ago as a sophomore and will assume the quarterbacking duties for Millard West this season. If Drwal gets the urge to throw (and he will, trust me), he has 1000 yard receiver Skyler Monaghan on tap. All Monaghan did was collect 1,041 yards catching the leather and score 13 TDs. State wrestling champion (220 lb class) Harrison Phillips also returns at TE/DE to bolster the 'Cats chances. Millard West should be a great opponent for LSE but could be a year away from being very, very good.

Speaking of consensus opinion, most folks are picking Millard North as the second best in Class A this Fall. Coach Freddy Petito's team has a wealth of retuning talent and keeps no secrets as to what their offense is going to do......run the triple option, repeat..repeat..repeat, repeat. Oh, a couple of times a game, Isaac Aakre may pull up an toss a 40 yard bomb here and there, but that may be the extent of the ariel game.. "We're gonna run at you, try and stop us" Simple formula, successful formula. The Mustangs may have the best trenches on both sides of the ball as they've had in a while and that is bad news for any opponent. Also worth mentioning is the fact Millard North may have the best linebacker I have seen since Kearney High and Ohio University's Noah Keller. Nick DeLuca is a fierce competitor from his LB slot and is destined for a great career at the next level.

Millard South may not may not be far behind the Mustangs in talent. In fact, the Patriots may have a better line than MN. QB Anthony Cloyd, only a junior, will handle the signal calling duties and is a fine duel treat QB. As he sophomore he ran for 441 yards and 8 scores and threw 834 yards and 8 touchdowns. With Freeman Coleman, Drayton Walker and Bryce Sonowski in the front line, Coach Andy Means' forces are going to wear down many opponents. This baby may be primed for overtime.

Oh Mother-of-Mercy, what a way to initiate Aurora's newly installed field turf. McCook is seriously looking at a trip to Lincoln this season. And Aurora....they just reload, that's how good Randy Huebert and his staff do things around that place. You think this game won't fall under the "monumental" catagory? Last season the Huskies made the trip to McCook and dropped a 2 overtime thriller to Jeff Gross and the boys, 16-13. McCook has all the tools to be the Best-of-The-West. Senior Austin Cherry (yes, another Cherry) is set to follow graduated Matt Chitwood at quarterback and his classmate, Jake Schlager returns in the backfield, plus is one of the finest linebackers in Class B. The Bison also feature a blue chip lineman in 5-11, 260 pound Mitch Collicott. Collicott is a returning all-stater like Schlager and coacg Gross thinks he may be one of the best lineman he's had in a while.......and I believe anything Jeff Gross tells me...period. And Aurora...we'll leave that a surprise so you'll consider attending this game...it'll be well worth the trip.

The last two seasons have not been kind to Lakeview when they have met up with Norfolk Catholic. One hates to use the word "over matched", but the Lakeview players may have perceived it in this manner, dropping last year's game 51-6 and losing to the Knights 38-3 in 2010. But this season may be different. If Kurt Frenzen can convince his forces they can play with Catholic, this could be interesting. We all know Norfolk Catholic merely reloads with bloodlines and families running deep, but Lakeview has a fine football team lined up for 2012 with speed to burn. The Vikings may suffer from a weight disadvantage in this frey, but they have a great young quarterback in Jake Shadley, who may be in line to shatter every passing record that ever existed at that fine institution. The Vikings also return shifty RB Preston Luedke, who gained 950 yards on the ground a year ago. Luedke is also a ferocious linebacker, who strikes with a purpose. But Norfolk Catholic will counter with a seasoned field general, Jordan Bellar, who was my C-1 all-state QB a season ago. Bellar is, of course, the son of head coach Jay Bellar, and has started since his sophomore season and is also a top notch kicker. Of course most folks know how good 6-5, 220 pound Conner Ketter has been the past 2 seasons. 91 tackles on defense, 18 catches for 265 yards on offense.

Most coaches say when you play Norfolk Catholic in football it's like stepping up to another level..way up. Columbus Lakeview is probably thinking they are ready to make this step.

Here are some other nice match-ups for Week Zero:

Lincoln Pius X @ Kearney (Pius up to Class A this year)

This guy will be at Seacrest Field for that fabulous double-header to kick off the season. I love the week prior to those opening games. Never thought sleepless nights could be so neat. Is it Friday yet?