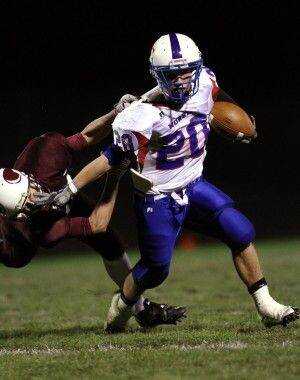 Bison won the regular season match-up 31-20 on September 9th in Bulldog country. McCook received a blow when ace RB/LB Jake Schlager broke a leg last week in the Holdrege game. Schlager was the second leading tackler for the Bison and a key cog in their running attack. The Bison have played with adversity in the playoffs before this, however. I remember in 2005, they lost Brendan Liess, the state's top RB and Jeff Klug who was not far behind him, to season ending knee injuries against Scottsbluff in the season opener. Despite the devistating losses they still advanced all the way to the state finals where they lost a 6-0 heartbreaker to Omaha Skutt. McCook still has a stable full of weapons to ride in 2011.

Alliance is led by 1000 yard rusher, Matt Pancost, who surpassed that mark 3 weeks ago. No team has beaten the Bulldogs by more than 10 points this season, but the Bison get 'em at home Friday.

Fasten your seat belts for this baby. AC nipped Gering 22-20 out West on September 23rd. The Patriots are just a whisker away from being a C-1 school yet still compete like mad in Class B football every season. Patriots are led by junior RB Jake Fowler, who has rushed for 1,256 yards in 2011. Two of AC's losses came at the hands of Crete and McCook, the other a double OT heart dropper to old nemsis Aurora. Gering started the season 3-1, then dropped 4 in a row before rebounding with wins over Alliance (17-7) and Sidney (21-0) to close the season. The 'Dogs run a 50% run/50% pass offense to keep opponents off balance. Signal caller Dillon DeMott has completed over 56% of his passes for over 1500 yards in 2011. Danny O'Boyle, a converted quarterback, has over 600 receiving yards.

Can't get a more tasty match-up than this. Blair is led by all-state FB/LB Jake Schany, who recently committed to Ohio U. after being wooed by Tulane and Colorado. After going 10-2 last season, the Bears have only lost to powerhouses Gretna and Elkhorn in 2011. Beatrice has also lost to Gretna along with Crete, Norris, and Aurora. The Orangeman are a dangerous football team with hard running Ethan Wright, QB Tandon Dorn, and WR Zach Decker. Decker also has a lethal leg that can win a football game in the waining moments with a field goal. But the Orangeman may have a devil of a time denting that Blair defense that allows less than 200 yards a contest. FB Schany is also nearing the 1000 yard rushing mark and is no fun to tackle at 6-2, 210 pounds. Darren Harsin is also one heck of a coach who has led the Bears to the last 2 state semi-finals.

Skutt reversed it's 2010 record of 3-6 and are playing well going into the playoffs. And Mark Wortman's Elkhorn Antlers...well, they're just playing well, period. Elkhorn's only hiccup this season was excusable...a 28-14 loss to Gretna 2 weeks ago. The last time Elkhorn didn't make the playoffs was 1995.....how's that for consistency. Graham Nabity, who was 12 yards short of a thousand in 2010 has surpassed the mark this year with over 1,100 yards. Elkhorn is a run oriented offense and boasts a solid defense that gives up only 200 yards a game. All you need to know about Omaha Skutt is that Matt Turman is the head man. Skutts 3 losses were to Blair, Crete and Ralston. Experts say: Elkhorn 24-20 Omaha Skutt.

Talk about a turn around. Elkhorn South was winless in their first season of football in 2010. Head coach Trevor Longe and his staff have done a magnificent job competing in a brutal district that includes Elkhorn and powerful Gretna. Yes, the Storm took a 40-0 beating from Gretna, but almost got Elkhorn in the regular season finale, losing by only a field goal, 17-14. Take away the Gretna game and the Storm only allowed 73 points in 8 games this season. Defending "B" champion Crete has undergone the transformation from the run to the passing game in 2011. Quarterback Derek McGinnis has thrown for 1,331 yards while completing 60-101 passes and 15 touchdowns (8 games). His favorite target is Corey Kalkwarf, who led Class B with 795 yards on 31 receptions and 8 Tds a week ago. Crete's well balanced offensive attack averages 364 yards per game (197/rushing, 167 passing) and their defense is tops in the class, giving up a paltry 155 yards an outing. Crete will be a tough out in this class, but a potential state final game with Gretna would be a dandy to say the least. Experts say: Crete 31-3 Elkhorn South

Huskies have lived on the edge this season, winning and losing games in the last seconds of overtime(s). Aurora lost a wealth of players from their last 2 state championship squads, but have hung in there while struggling on defense at times. Norris on the other hand, is not exactly a household name when it comes to the playoffs. The Titans have only qualified for the playoffs only 5 times since 1979, the year they won the "B" championship. They went 17 seasons before making it again and last qualified in 2007 when they were bumped in the first round by Omaha Gross. Norris closed with a rush though, winning it's last 4 games which including 3 district wins. The Titans are led by Class B's leading rusher James Kruger, a punishing runner who has rambled for 1,431 yards in 2011. Kruger rushed for 1,032 a year ago for a 3-6 team as a sophomore.

Aurora had to replace Mr. Everything, Tyson Broekemeier at QB, but Seth Schnakenburg has stepped in and done a fine job. Schnakenburg has completed 92 of 184 passes for 1,284 yards and 13 scores (8 games). The Huskie offense is averaging 365 yards a game, but the worry is the defense which has given up an "unAurora-like" 336 yards a contest, over 1800 of that on the ground. There is no reason to think that Friday's game will not require a pocketful of antacid tablets and an asperin (for safety precaution) to get through the game.

Holy Road Trip, Batman! I wonder if Ralston is leaving right now for the game? I also wonder if they've seen the weather report for snow out there on Wednesday? Anyway, this match-up should be a hum dinger. I saw Scottsbluff play at GINW and the 'Cats have speed to burn with Luke Worden and 1000 yard rusher, Matt Klein (1,037 yards). The Bearcats no longer run the Gary Hartman double-wing, but they feature multiple offensive sets that drive opponents crazy. Their offense averages around 306 yards a game, and the 'Cat "D" is solid, giving up only 246/game. Worden is a dangerous return man who can change a game in a hurry. The Ralston Rams boast the number ONE offense in Class B, led by a brutal running game that averages a hefty 305 yards a contest. 6-1, 190 pound Eric Vejvoda has rushed for 1,057 yards thus far and is aided by quarterback Brad Simpson (700 yards) and sophomore speedster Isaac Wallace. The Rams were picked to finish last in District 2 this season by one publication...guess they fooled 'em, huh?

If Ralston doesn't get bus legs, this should be one heck of a high school football game.

Man oh man are these Dragons good. Only Crete has a better defense in Class B, but it's players like Andy Janovich (6-2, 210) and 6-5, 210 quarterback Matt Jones, that make this bunch click. Janovich is an absolute terror on defense recording over 60 unassisted tackles. He's also scored 13 Tds on offense. Plattsmouth bested Nebraska City 34-0 to grab the #15 slot in the playoffs. The Blue Devils rarely, and I mean rarely pass, and rely on Taylor McAllister and QB Tallon Barber for their rushing yards. The Plattsmouth defense is led by returning all-stater, Ross Dzuris (6-4, 230) and Daniel Porter, who both have over 100 tackle points. Plattsmouth will have to sustain long drives and keep the ball away from Gretna to have a shot here.

Incidentally, I like these Gretna Dragons to advance to the State Championship game and have a real shot at taking it all. Gretna and McCook anybody?