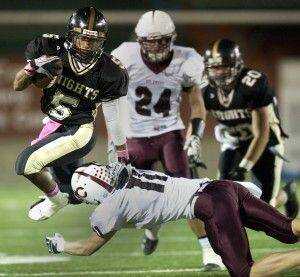 Oh man, what a unlucky 1st round draw for Burke. They say the Bulldogs have the best offensive line in Class A and Burke's 306 yards per game rushing average reflects that. On the other hand, Millard North only gives up 90 a contest on the ground. The Mustangs, led by all-state quarterback Isaac Aakre, average 354/game on the ground, but Burke in turn allows a stingy 123. Millard North may have the edge here, but Burke QB, Zach Cook has thrown for 1, 385 yards and 19 TDs and Millard North has given up a buck 44 per contest through the air. Burke has two very quick receivers and trying to cover 6-9 Trevaun Hymer could present a daunting task for Millard North's defensive backs.

This game could come down to turnovers, but the one advantage Omaha Burke would clearly have is jumping out to an early 2 or 3 touchdown lead because trhe Mustangs do not have an offensive that is well suited for coming from behind. A win by Freddy Petito's boys would throw Class A into a tizzy. A win by Burke would make a tough road for GI and Omaha Central or anybody else for that matter. Burke is the real deal.

Papio South's rush defense bothers me. They gave up a whopping 202 yards a contest and in Class A, and that is red flag. Westside will pound RB's Anthony Nelson and Cameron Morgan right at the heart of the Titans middle all night. Now Westside's rushing "D" is not all that stellar (177/game), but 2 of their 3 losses came to Lincoln SW and Burke and they beat Papillion LV last Friday 20-17. If you will recall, this same Papillion LV squad beat Papio South 48-3 in the season opener. The one head scratcher that enters in here is the Titans' 16-9 win against Lincoln SE in week 2. Still can't figure that baby out. Veteran coach Walt Olson has done a fine job in his initial season at PLVS.

The one thing I can tell you is after spending an entire day and evening with Omaha Central's football team and coachng staff last October 15th, I could see this successful season coming. Thing about the Eagles is that their speed will match up witgh anybody in the state in Class A, including Grand Island. The Eagles pushed #1 Omaha Burke to the brink on opening night 14-7. The Class A offenses have gone nuts since that day, but that Central defense has remained rock solid all year, allowing only 211 total yards/game. Their pass defense is better than any playoff team in Class A. The Eagles also have a 1000 yard rusher in junior Jackie Davis, a speed merchant who can pick holes with the best of them. Davis has rushed for 1,012 yards in 2011. Lincoln East gets in with a 3-6 record but has had one of the most brutal schedules in Class A and still has a pretty decent defense. How would you like to play Kearney, Lincoln SW, Omaha Central, Lincoln SE, and Grand Island in one season? 6 of their 9 opponents are in the post season festivities. Central won the regular season game in Omaha 41-12.

Grand Island's quest for an unbeaten season was spoiled by Lincoln Southeast last Friday, but the lightening quick Islanders are still one of the top threats to win it all. Grand Island, who allows only 209 yards per outing, were dented by the passing of Southeast's cool-headed Najee Jackson, and running of 160 pound tough guy, Devin Washington. However, Jeff Tomlin is one of the finest line coaches in the state and will make adjustments. Columbus has suffered some injuries during the second half of the season and has to have nifty quarterback Jake Ek at full speed to win this match-up. GI jumped on Columbus 14-0 in their first meeting before anyone could get settled in their seats and the Discoverers have to avoid a repeat of that start.

GI's Ryker Fyfe is the best quarterback in the state in my mind and is certainly deserving of a D-1 look. Somebody is crazy if they fail to give Fyfe a serious look at the Division one level. The Islanders speed is their key, especially in the defensive backfield and receiving corps led by 400 meter track wizzards, Sam Foltz and Will Bamesberger. Folt's dad, Gerald was one of the best backs in the state back in 1977 at Greeley high back in their 11-man days. He was the first to hit a 1000 yards rushing that season in Nebraska....can you say bloodlines? The teams will have plenty of rest at the break considering GI's apparent quest to break the world's record for the longest halftime........ok, maybe it just seems that long. GI won the regular season game 24-6 on Sept. 23rd

Prep's Class A record of 17 straight playoff appearances is still intact, but their string of 46 consecutive winning seasons is in serious jeapordy. Lincoln Southest is clicking on all cylinders and 1st year coach Ryan Gottula is doing an outstanding job with this Knight team. I can't imagine a better offensive line than Southeast has and it is their work that opens holes for one of the toughest 160 pound Class A backs I've seen in a while...Devin Washington. The kid reminds of a Creighton Prep runner from a year ago named Richard Wynne Jr. The Knights average a 100 yards more on offense than does Prep and give up a hundred less on defense...you do the math. Southeast's relentless line will wear the 'Jays down in a hurry. The Knights thumped Prep 38-0 in the late game at Seacrest on September 16th.

These 2 teams met in week two and Millard West won 26-13. Since then the Wildcats have lost only to Lincoln SW and Millard North. Millard South's only other setback was to 42-27 to Omaha Central, although they were stung 35-0 by Millard North but that ended up being a 1-0 forfeit win for the Patriots after the Mustangs were penalized playing an ineligible player.

One plus for Millard South is having Anthony Cloyd back at quarterback, but the bad news is Millard West, like the Patriots, has a stingy pass defense. The Wildcats should be able to run on Millard South considering they average 183 rushing yards a game and South gives up 168. Millard West coach Kirk Peterson has a young squad that has been improving each week. Millard West has qualified for the playoffs 14 times since 1996 and have only been knocked out of the 1st round 3 times during that stint.. On the other hand, Millard South has been in the past 2 state championship games and has been a 1st round casualty only twice since 1992......expect a shootout here.

You think Ryker Fyfe is a heck of a quarterback? Take a peak at Papio's Sophomore signal caller, Alec Ditoro. First of all, North Platte quarterback Trey Moore transfered to Papio and was expected to be the starter after throwing for 1,781 yards in 2010. His numbers were expected to be off the charts with recievers like Ryan Lief and Bryce Sheard, both 6-4, roaming the field. But enter Ditoro. He impressed Monarch coaches so much that it was decided he and Moore would alternate at quarterback but it was Alec Ditoro who nabbed the gig and has posted some ungodly numbers in the process. Please be seated for this one. Ditoro has thrown 196 times, completing 139 of those, 19 for scores. He has only 4 interceptions. Lief has grabbed 39 of those for a whopping 603 yards and 10 TDs (Class A best) and Sheard has 29 actches for 577 yards and 8 scores. But hold on, they are playing Kearney and they "ain't" chopped liver by any means.

The Bearcats have a fine quarterback of their own in Luke McNitt. McNitt is a duel threat with a cannon for an arm and at 6-2, 215 pounds he is a load to bring down when he decides to take off and run. McNitt has run for over 500 yards and also has RB Caleb Lundgren to feed the ball. A weak schedule may have hurt Kearney when they lost to Lincoln SW 48-21 two weeks ago but they were in that game until the 4th quarter. Brandon Cool is one of the best in the business, so Kearney is always going to be a threat no matter whom they play.

Expect a real passing exhibition in this one because McNitt connects on 65% of his throws and having speedsters Spencer Lindsay, Derek Schriner and Nate Stevens will give him great targets. So who has the better pass defense on paper? Kearney allows 105 per game and Papillion LV 145. The Bearcats give up almost 20 more that Papio oin the ground but it's the ariel game that suits the Monarchs the best. Is this going to be a 48-45 game that ends at midnight?

Only day game in Class A and Lincoln Southwest has been playing like a runaway freight train. Since their opening season loss to Lincoln SE (12-17), the Silver Hawks have reeled off 8 in a row, outscoring opponents 328-77. In fact, they have averaged Fifty points an outing the past 5 games. Southwest has a returning 1000 yard rusher in Jake Jordan (1,345), but he is splitting time with a rising star by the name of Ehan Douglass-Wiley. Two weeks ago I saw Douglass-Wiley shred the Kearney "D" for 194 yards and last week he led the SW offense with a 91 yards in the Norfolk game. At quarterback, you don't get much better than Tay Bender, who is realizing as of late, how to distribute the ball among his weapons just right. The Silver Hawks have an "O" line that will rival Lincoln Southeast so Bellevue West will have a tough time stopping the Lincoln Southwest running game that averages around 226 an outing.

Bellevue West is always going to put points on the board considering the fact they have John Faiman as a head coach will up back that statement. Lest we forget that Faiman twice was the offensive genius that fashioned a game plan to sting Nebraska's Cornhuskers when he coached for Warren Powers (offensive coordinator) at Washington State, then at Missouri.....sold yet? It's the leaky defense that Lincoln SW will exploit and in all liklihood advance to a 2nd round match-up with either Kearney or Papillion LV. Southwest has of course, beaten Kearney but has not faced Papio.