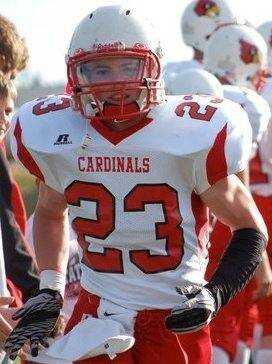 On a grey, overcast late afternoon and evening at UNK's Foster Field Friday, two of the finest runners in 8-Man man football and their lineman were shining through the gloomy skies like shining stars.

Chance Younger of Bertrand and Garrett Kolling of Alma led their respective teams to wins on the artificial turf in what has become an annual event at UNK. Bertrand raced to 36-12 halftime lead in route to a 49-22 win over unbeaten Elwood in the 5:00 match up and Alma blitzed Axtell with a 35 point second quarter outburst and went on to post a 64-12 victory in the nightcap.

Both Bertrand and Elwood entered their game 2-0 and the first quarter looked like it was going to be tight all the way. About the only thing that went wrong for the Vikings Chance Younger all evening was the 1 yard loss on his first carry. After quarterback Ryan Dahlgren ripped through for an 11 yard gain the very next play, it was Younger that sprinted 35 yards for a score with 8:59 remaining in the 1st. Dalhlgren hit Tyler Dahlgren on an 11 yard scoring strike 3 and a half minutes later for a 13-0 lead, but Elwood then answered with a Spencer Gydensen 3 yard plunge and a 2 point conversion pass to Dustin Langenburg and the score was just 13-8, Bertrand after one quarter. Elwood kept it close in the 2nd quarter with a 23 yard TD by Walter Flint (from Aaron Wesimann) but Bertrand pulled away from the 21-14 advantage with Chance Younger hauling in a 58 yard scoring strike from Dahlgren, then scoring on a dancing 41 yard sweep with 1:42 left in the half. Bertrand had bolted to a 36-14 advantage at the half.

Younger, who piled up 168 yards on 16 carries in the first half, carried only 3 times in the 3rd quarter, scoring on a 27 yard run with 3:42 left in that stanza. The hard running and fierce hitting Younger, who had 1,406 yards and 22 touchdowns a year ago, ended the night with 199 yards on 19 touches and that included a 58 yard punt return score that was nullified by a block in the back. Bertrand is a very well coached team and head man Brent Streeter has his forces well versed in the fundamentals of high school football. I was impressed by Viking lineman Ashton Peterson, who was a terror on defense and a crunching blocker in the "O" line. Quarterback Ryan Dahlgren, a junior was also impressive running the offense and was a nice passer and runner as well.

In the second contest, Class D-1's number one Alma Cardinals flexed their muscles against a winless, but very hard hitting Axtell squad. Axtell, led by 2 time 100 and 200 meter sprint champ Brandon Benson, actually held the Cardinals on the opening drive, but Kory Kindler nailed a long 43 yard field goal with room to spare to give Alma the 3-0 lead. After a 3 and out, the Axtell interior line stopped Garrett Kolling to a 2 yard gain, but the fleet senior slipped to the outside and sprinted 63 yards for a score on the very next play and the route was on. Kolling would add touchdowns in the second quarter on a 4 yard run, a 45 yard interception return, a 6 yard run and a 25 yard pass reception that should have made ESPN's Sports Center. With only 31 seconds remaining in the half, quarterback Tanner Hayes lofted a throw to the left corner of the end zone and Kolling out jumped 2 Wildcat defenders to pull down the highlight reel catch. Alma put up 35 points in that second quarter and enjoyed a 44-4 halftime bulge. Garrett Kolling had amassed 189 yards on 19 carries in the first half alone and scored all but one of the 6 Cardinal touchdowns.

Alma added 3 scores in the second half, which was moving on the mandatory running clock after a 35 point lead. Kolling did not touch the pigskin in the second half and ended the night with those 1st half stats of 189-19 and 6 touchdowns. Almost as impressive speed wise was part time signal caller, Alan Christensen. The 5-11, 160 pounder broke loose for a 34 yard scoring run in the 3rd quarter and ended up with 84 yards on only 5 carries. His other touches went for 12, 22, a 10 yard TD in the 2nd, and a 5 yard carry. Hard running fullback, Ross Poyser a 210 bull,had 42 yards on 8 carries and a 5 yard TD blast. The Axtell backs ran very hard in the loss although the score did not indicate it. Brandon Benson, who was injured in the second half and did not return, ran for 63-16, speedy Jordan Miller had 64 yards on 12 carries, but the most impressive running may have been by 5-6", 125 pound sophomore Jacob Jelden, who ran fearlessly for 80 grueling yards on 15 painful carries.

Let me tell you, this Alma team looks good and just to be on the sidelines with this bunch gives you the impression and the inner feeling they have what it takes to go very, very deep in the playoffs with Lincoln's Memorial Stadium on the horizon. Coach Isaac Frecks is doing a magnificent job of running this machine and with lineman like all-state and division 1 prospect Kai Wolf (6-3, 285), 220 pound Lane Wright, 175 pound Jacob Maly, and block busting FB, Ross Poyster, Mr. Kolling is enjoying his escorts on the running plays. The Cardinals have a favorable schedule remaining and with a little luck in the injury department, may be hard to beat in D-1.

There are some mighty good running backs in the 8-Man football game in Nebraska this season, Howells' Trent Mastny, Newman Grove's Troy McCuiston, Jed Fenske of Sargent and Josh Eklund of Friend, but Friday night, and trust me on this one......I witnessed 2 of the very best in Alma's Garrett Kolling and Bertrand's Chance Younger. Man, would I give anything to see these 2 go head to head because both are excellent defensive players also.

How sweet is was!