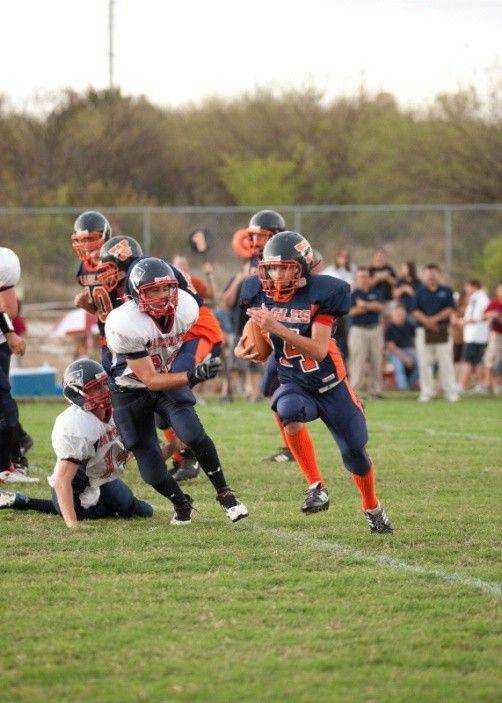 A San Antonio Winston runner turns and burns for the end zone in a Texas 6-Man game.

The temperature had "cooled" down to around 99 degrees when Castle Hill 1st Baptist kicked off to Winston School in the season opener for both 6-Man football teams in San Antonio, Texas last Friday evening. Each team had just 14 players suited up and they would need every available body for what was about to transpire on that football field.

When it was all said and done, Castle Hill rallied from a 62-47 halftime deficit to edge Winston 109-105 in a game that took 3 hours and 50 minutes. Winston running back, LaJordan Wilkerson apparently set a Texas high school single game rushing record by carrying 34 times for an incredible 591 yards and 13 touchdowns. The game details are sketchy

at this point, but Winston head coach Mark Hambrick is in the process of sending me a game tape and details of the bizarre contest. I would imagine the record would have to be validated by the Texas high school's "powers-to-be", but setting any type of high school football record in a state like Texas is huge.

LaJordan Wilkerson's brother, Jarrell set a career rushing record for the city of San Antonio high school football by running for 7, 249 yards in a career that ended in 2005. He accepted a scholarship at Texas but abruptly quit school a couple of weeks before the Longhorns played USC in the National Championship without ever playing a down. He has had a rocky road since, but the bloodlines are there and the younger Wilkerson is doing very well at The Winston according to Coach Hambrick.

The Winston school in San Antonio is a private school specializing in educating students with above intelligence that possess various learning disabilities. They must do a wonderful job because the tuition is a smidge over $15,000 a year and they seem to graduate highly trained students. The school is small enough that they have to play 6-Man football and in Texas there appears to be around 208 schools playing the 6-man game compared to 17 in Nebraska. Many Home Schools in Texas even have football teams.

I will be receiving more information on this game, but what I do know is that Wilkerson did rush for over 3000 yards a year ago for The Winston school and scored 64 touchdowns. Reaching the century mark is not a first for this team because a year ago they beat Christian Academy of San Antonio 102-78. Are we talking basketball here?

LaJordan Wilkerson is 5-11 and a solid 195 pounds and according to his coach, Mark Hambrick, he is built like former Houston Oiler back, Earl Campbell, tree truck legs and all. Like Hambrick says, "It appears I have an 11-Man running back playing 6-Man football"...........agreed.

When I receive more information and the game tapes, I will do a follow-up on this running back and the amazing game. Here is the score by quarters of last Friday night's wild one: