Track news.......Cozad has a Freshman Flyer! 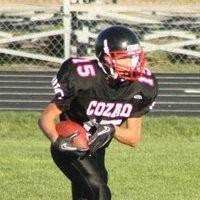 It's been 19 years since Nebraska high school track has seen a freshman sprinter like this. The year was 1992 and a good looking, fearless 9th grade flash from Beatrice named Kenton Peterson was mowing down every experienced Class B sprinter around at the State Track Championships at Omaha Burke. Peterson slammed the Class B sprints and won a all-class Gold Medal in the 100, helping the Orangeman to a state track title that season. Peterson went on to have an illustrious track career at Beatrice and was a long distance threat as a wide receiver on the gridiron. But the speedy Peterson may have a successor to his laurels in the person of Cozad Freshman, Jake Paulsen.

Jake Paulsen started stirring things up on the track last season as an 8th grade runner when he won slammed the sprints at the first ever Nebraska Middle School Track & Field Championships in Gothenburg. Paulsen ran an :11.35 in the 100 and a :23.53 in the 200. He also won the high jump with a leap of 5-11. Paulsen picked up where he left of as a middle school competitor when he swept the sprints at the Ed Moore Invitational in Ogallala on April 2nd. Jake bested seasoned Gothenburg sprinter, Tannor Morczek in the 100 and 200 and posted some nifty marks in both races. Paulsen ran an 11 flat in the 100 and blazed to a :22.74 in the 200. He also won the high jump for good measure with a jump of 6-2". But it was just 4 days ago on a beautiful day in Minden that the young Cozad freshman really rocketed on to the Nebraska high school track scene..............big time.

Jake Paulsen bested Adams Central's Ashton LeBar in the 100 on his way to a blazing :10.88. LeBar was the state's leader in that event going into that race with a previous time of :10.73. The best was yet to come in the 200 meter dash when Jake Paulsen shot out of the blocks like a 4th of July fire cracker and sped to an incredible :21.81 winning time while leaving the field to view him from the backside. Remember friends........this young man is a FRESHMAN.

I started hearing about Jake Paulsen in the Fall of 2009 when he ran all over the place on the gridiron for Cozad's 8th grade football squad. I lost count of his touchdowns at 26 after they had posted scores in the 60's the first 4 games. Cozad head football coach Ron Bubak told me they didn't keep stats for 8th grade football at Cozad, but did indicate that Paulsen was a pretty tough boy to catch once he "got" the corner on a wide sweep. I guess. My good friend, Dave Clark, who is an assistant track coach at Gothenburg, told me of Paulsen's track feats as an 8th grade runner, so I knew of Jake's feats in both sports a year before he was in high school. Looks like Mr. Paulsen has made the transition from middle school to high school in one heck of a hurry.

I thought Kenton Peterson was one of the finest younger sprinters I had ever witnessed and that was almost 20 seasons ago. His performance at the 1992 State Track Meet was astounding, but it seems Jake Paulsen may be on track to step into the following footsteps of Peterson's legacy. I have not seen the Cozad flyer run as of yet, but Jake Paulsen informed me that if I did get to a meet he would try to rip off a :21.5 in that 200 meter jaunt. It's not often this kind of sprinter comes along and with that kind of all out running and sudden bursts out of the blocks, there is that continued high risk of injury......especially when you are running in the 10's in the 100 and 21's in the two. You just have to hope that fate and good fortune is on the side of young Jake Paulsen because it appears that the sky is the limit for this kid right now.

So, if you are a serious track fan and you want to see this young sprint sensation in action and you live in Grand Island.......you just hit the jackpot. Cozad will be competing in the Northwest Invitational at Viking field next Thursday, April 21st. Let's keep our fingers crossed for gorgeous weather and an opportunity for Jake "I B Haulin" Paulsen to explode in the sprints. If you bring your cell phone and it has camera capabilities and you want to snap a shot of Jake Paulsen, you best be quick or he'll be gone in a flash.