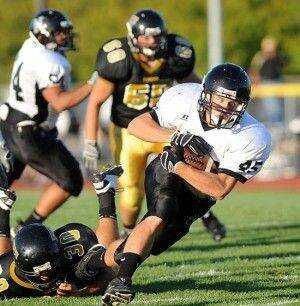 Not all teams opened their seasons in week zero but there were plenty of outstanding performances to get 2010 underway. Paving the way was Omaha Burke's Jimmie Forsythe, who is a must see if you are a serious high school football fan. Classes A and B got started last week and the remainder get going this week. This list will swell to at least double by the time Friday night comes to a close this week. Tell me this isn't like being in Heaven!

*Brock "The Tank" Sherman-Crete - 220 pound battering ram ran over, around, and through Northwest's defense for 244 yards on 17 carries and scored on runs of 36 and 41 yards.

*Jacob Jordan-Lincoln SW- Junior RB burst on the scene with a 152 yard rushing effort in an OT loss to Lincoln SE Thursday. Jordan had many yards after contact and will be a name you'll read about in future weeks.

*Heath Anderberry-Axtell -- Rushed for 143-25 carries in the loss to Arapahoe.

*Sean May and Shawn Christensen-Wallace -- Raised a heck of a ruckus with Potter-Dix last Friday. The multi-talented May rushed for 146-15 and scored 4 times, while Christensen ran for 157-17 and scored once.

*Thatcher Vap and Andrew Vinton-North Platte St. Pats -- Duo ran roughshod over Bayard in a 49-27 route. Vap, only a Junior, rushed for 174-15 carries and Vinton burned 'em for 198 yards on 16 carries and 4 TD's. Looks like the Irish with the veteran line has the rushing game cranked up.

*Tim Neel-Bellevue West -- Running Back ran for 112 yards and a 12 yard touchdown and had 43 receiving yards including a 31 yard TD catch in Bell. West's rivalry win over Bellevue East.

*Ryen Miller-Ravenna -- Doniphan-Trumbull had enough of Miller Friday as the senior rushed for 150 yards on 25 tries.

*Caleb Kuhfahl-Wahoo Neumann -- Bruising FB bulled his way for 154 big ones on only 12 carries in the Cavs 40-23 win over Platteview.

*Dillon Gushard-Lincoln NE -- Another fullback had a big evening. Gushard made life miserable for the interior of the Fremont defense as he gained 155 on 13 carries in the Rockets 32-12 win last Thursday.

*Daniel Davie-Beatrice -- Gold Medal 100/200 Track man/Husker recruit didn't have all that shabby of a start with 94 yards on only 12 carries in the 28-21 loss to Ralston. You just have to hold your breath if you're on defense every time he touches the ball.

*Drew Schneider-Fremont -- OK, the Tigers lost to Lincoln NE, but Schneider made the transition from 8-Man ball to the Class A game rather well by rushing for 84 yards on 8 carries and making some key tackles on defense.

*Ryan Randall-Blair -- making his fist start ever on defense, the defending State Rushing Champion made the game saving tackle to preserve the Bears 14-7 win over Omaha Skutt. He also rushed for 113-23 and scored both Tds on runs of 27 and 3 yards. This guy's a keeper.

*Kyle Sanders-Alliance -- Seemingly went unnoticed in the pre-season capsules, but rambled for 147 yards on a grinding 37 carries to lead the "Dogs to their 1st win over rival Chadron in 8 years (33-14).

Isaac Aakre-Millard North -- 5-11, 180 pound Sophomore bumped 1000 yard rusher, Kyle Erickson from his starting QB position for his passing ability. Aakre responded last Friday by passing for 124 and running for 114 yards in a 7-6 loss to Creighton Prep. The last time a 10th grader started for MN was in 1988. Imagine......Millard North having more passing yards then rushing....happened in the Prep game!