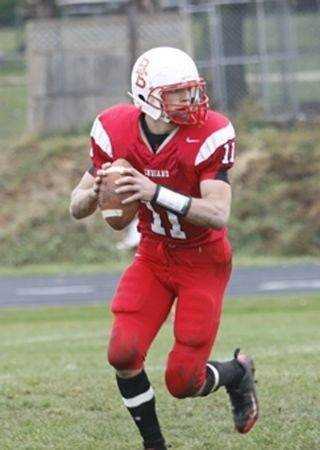 Well, they say you canĪ»t much success at any level of football without the services of a strong quarterback. There is certainly no exception to that rule on the high school level and today we gaze into the 2010 crystal ball and see what field leaders will emerge from the 11-Man ranks and lead their respective teams to prominence in the upcoming season. That season is only 18 days away for all Class A and Class B squads and a smattering of C-1 and C-2 schools. LetĪ»s have a look at some of these glamour boys:

*Jimmie Forysthe-Omaha Burke ©C No quarterback discussion should start without this guy being mentioned right at the top. Forsythe has been under center since is Sophomore season for the Bulldogs and that doesnĪ»t occur with all that much frequency in Class A. He threw for 655 yards that season and rushed for another 830 yards. Last year, he passed for 1,418 yards/ 17 scores, and rushed for 766 yards and 14 trips to the house. The 5-11, 185 pound speedster averaged 250 yards of total offense per game in Ī«09. Forsythe is very difficult to get a hold of when he gets to the open field and his 4.45 speed and 32 inch vertical leap demonstrate how athletic this kid is. Keep your eye peeled for Jimmie ForsytheĪ»s efforts in 2010.ĪŁyou can bet Nebraska, Kansas Iowa State, and Ohio will be.

*Derrius Vick-Lincoln Southeast. ©C 2 star recruit already has a full ride offer from Colorado State and may be good enough on the hardwood to get a D-1 offer as well. Last season the 6-2, 180 pound Vick threw for 1,057 yards and 9 touchdowns and is helping to put Lincoln Southeast back on the football map. Helps also when you can jump to the moon and run a 4.6 forty yard sprint. Looks like LincolnĪ»s best signal caller and the August 26th opener with Lincoln SW should be a measuring stick for gridiron supremacy in the Star City.

*Kyle Erickson-Millard North ©C Appears that this 1,216 yard rusher may be able to give the Freddy PetitoĪ»s Mustangs a legit shot at the Class A title this Fall. Erickson fitĪ»s the mold of the perfect Millard North running quarterback and you and I know how many outstanding players they have had in the past that fit that moldĪŁ..Ī»nuff said.

*Nathan Scott-Broken Bow. ©C This young man is 6-3, and 195 pounds of pure football. A starter since game 3 of his Freshman year, Scott is a leader any coach would love to have around. Last year he ran for 995 yards and 18 Tds and passed for 1,005 more, adding 11 scores via that route. How soon we forget, the Bow came within a whisper of sending the mighty St. Cecilia back to Hastings in the C-1 Semis a year ago.

*Tyson Broekemeier-Aurora -(6-1, 170) Oh boy, this guy is something else, really something! I have had the pleasure of watching him over a half a dozen times and I will christen him right here and right now, the Ī░Master of TrickeryĪ▒. After watching high school football for over 50 years, I rarely get fooled on a fake in the backfield, but Broekemeier pulled off that trick last season twice on the 1000 Yard Guy. HeĪ»s that sneaky. In leading the Huskies to their 2nd straight Class B title, he rushed for 670 yards but the most impressive figures that just floors me are his passing statistics. He completed an insane 68% of his passes (102-150) for 1,742 yards with only ONE interceptionĪŁ.ONE! Friends, high school QBĪ»s just DO NOT do that, period. If you watch 50 high school quarterbacks throw 50 passes each, there wonĪ»t be a hand full that can complete 50% standing still in the pocket with no rush. Impressed yet? I would hate to be on defense when thus guy takes the snap.

*Robby Almond-Holdrege ©C Yea, the Dusters are going to throw the ball. Last year, Almond came within a whisker of hitting 50% of his passes and was on target for a whopping 1,498 yards and 12 scores. The 6-1, 175 pound QB will have all of receivers back and 5 starters in the offensive lineĪŁĪŁbombs away!

*Caleb Kluender-Grand Island Central Catholic ©C Senior transfer from Valentine will turn some heads if he starts at QB, which should be a no-brainer, but stranger things have happened. This nifty duel threat QB ran for 669 yards and threw for another 905 last season for the Badgers. As a sophomore, Kluender (rhymes with thunder) tossed the ball for 1,303 yds and 11 Tds with a stellar 54% completion rate. Toss in potential 1000 yard rusher, Seth Wardyn and bruising 195 lb. FB/LB, Garrett Ī░DocĪ▒ Coble and you have a pretty salty Crusader backfield.

*Ryan Herdman-Ralston ©C For starters, Herdman is a skyscraper at 6-6 and 195 pounds. Last year for the Rams he threw for 1,077 yards. Granted, his completion percentage wasnĪ»t eye popping, but Ralston is going to be greatly improved and Herdman will be a tough cookie (tall cookie) to contend with since he can see over most everybody unless the opposition has a 6-10 linebacker.

*Derek McGinnis-Crete ©C Well, letĪ»s begin with the fact his Dad, Chuck is one of the absolute finest coaches in the high school game today and his surrounding cast is loaded to the gills. The Cardinal QB, who stands a lofty 6-3, 190 is going to have a breakout season and will be right in there with Aurora when it all comes down to the nitty gritty in Class B. McGinnis threw for 791 yards and 8 scores a year ago and has Husker recruit Ryne Reeves to protect him in the pocket. He also has his favorite target Ben Muff, who hauled in 17 receptions for 454 yards and an astounding 27 yards a catch. Think Muff might be a home run threat? YouĪ»ll be hearing about Ī░ChuckĪ»s boyĪ░ in the upcoming season..

*Matt Overmiller-Adams Central ©C (6-2-170) Want to hear something funny? I actually heard a couple of knocks on this kid. Any other comedy lines out there? HereĪ»s the deal. In an Adams Central offensive scheme that stresses the run first, the lanky Overmiller completed well over half of his passes for 1,371 yards and 14 scores. Granted, the Patriots lost some fine receivers (Arlt, Hunt), but trust me when I say crafty head coach Bill Carlin will figure something out. Carlin is one of the best around.

*Brandon Stuart-Bayard ©C Talk about a QB who threw for a gazillion yardsĪŁwell, not quite. Stuart amassed a gigantic 1,837 yards/16 Tds while completing half of the tosses he attemptedĪŁĪŁ.and the Tigers won only 2 games. Pretty good for a 2-6 squad. Expect more from Stuart this season as the Bayard air will be filled with footballs and their record improves.

*Zach Zobel-Elmwood-Murdock ©C Another 1000 yard QB (1,156/14TDs), Zobel is a true all-around athlete from a school that competes with the best season after season. His buddy Adam Neels (FB/LB) will help EM mold another playoff season in 2010. Zobel is a 6 footer with great leadership skills playing for a smart program.

*Christian Nohr-Crofton ©C (6-2, 185) This kid has a great quarterback build and has improved each season as a starter. In 2008, Nohr threw for 748 yards and improved to 987 a year ago despite the Warriors favoring their bruising running game plan. Expect a Nohr to be a 1000 yard passer with some of the toughest German boys youĪ»ll ever find protecting him in the pocket. Crofton drops down to C-2 this season to boot and will not have to face the brutal Ī░Norfolk Catholic, PierceĪ▒ type schedule.

*Will McCawley-David Cit Aquinas -(6-0, 170) No flash and glitter surrounding this player, just smart, hard nosed, Ronnie Mimick footballĪŁĪŁand thatĪ»s tough to beat! McCawley will direct the MonarchĪ»s double-wing attack and will either keep the ball, pitch it to 1000 yarder, Nate Roh, or burn your backside with a rollout pass to a wide out who has just beaten your safety, who had just committed to stopping the run. McCawley may just be playing at Memorial Stadium come late November.

*Brad Welniak-Ord and Tyler McKeone-Lexington ©C These two are mentioned in the same breath because they played different positions in 2009. McKeone is a converted WR and Welniak was a free safety a year. Both are blessed with athleticism and will make the switch with great success IĪ»m guessing.

*Alex Strand-Chase County ©C 6-3, 205 pound brute is tough to tackle a loves contact on either side of the ball. Vicious hitter from his LB spot.

*Danny Mlynczak-Omaha Gross ©C If Coach Tim Johnk tells me this guy is going to good, I believe. Anybody want to buy a vowel?

*Brady Rutt-Hastings. Track weight star will have a nice season he gets some help from his Tiger buddies. I would like to see Hastings do wellĪŁ.been a while.

Tomorrow, we look at the 8-Man quarterback standouts.