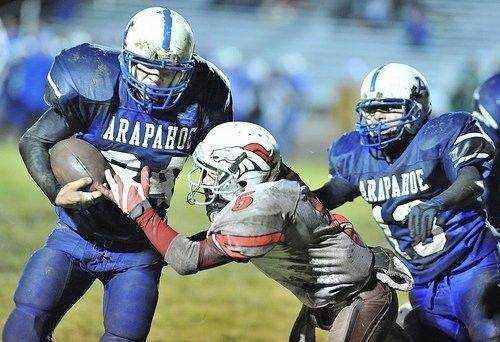 Today we will preview some more returning 1000 yard rushers and their "escorts".

As any well rounded football fan knows, a backs goes nowhere without the services of an excellent line to open holes at the scrimmage line. A good back can take it from there and increase his chances for a trip to the house, however.

The 8-Man ranks have 13 RB's coming back for a shot at back-to-back 1000 yard campaigns. Here is a peak at some of that group:

The lad pictured above is Dustin Park of Arapahoe. Arapahoe has had it's share of thousand yard rushers in the 2000's and Park may be one of the niftiest of all. With that said, it would be difficult to beat the accomplishments of Tyler Hamel, a 3 year 1000 yarder who ran for the Warriors from 2004-2006 and piled up over 3000 yards in the process, but Park is pretty salty. The shifty 170 pounder scooted for 1,431 yards a year ago after a Sophomore season that ended up only 44 yards short of a grand. Arapahoe has qualified for the playoffs the past 8 seasons in a row, and even though Park has only one returning lineman (Dakota Welch) to block for him in the O-Line, there are some promising younger players and an one of the best coaches in the business, Daren Hatch, at the reins.

*Colton-Rush-Anselmo-Merna -- Talk about a school with a history of outstanding running backs.....Holy smokes alive, the Coyotes have a more 1000 yard runners than almost any school, regardless of class, in the entire state. 20 to be exact, and one the most recent is Colton's brother, Stephan Rush who graduated just 2 years ago. Now, these Rush boys don't weigh more than a welterweight boxer, but they are shifty as heck and have above average vision. Colton weighs just a buck 55, but you have to catch him first. He also is an excellent DB.

*Sean May -- Wallace -- Oh momma, is this guy an athlete! May is a QB who just lines up in the Shotgun and goes. Last year Wallace won only one game and even had to forfeit the last one because of a flu epidemic. Their opponents averaged a whopping 64 points per game. Wallace put up 45 per/game though and the amazing thing about May is that he rushed for an incredible 1,300 yards in only 7 contests. A starter since day one of his Freshman year, opponents find him almost impossible to stop if he gets past the line. May is also an outstanding Track athlete. Even if May has little help this season, he is probably headed for another 1000 yard rushing campaign. You should see this kid on film........now you see him....now you don't!

*Wayne Brugeman-Bloomfield -- Another school with a rich history of runners, Bloomfield looks to be on track for an ultra fine season in 2010 and Brugeman is one of the main reasons why. After rambling for 1,714 yards in 2009, Brugeman has big old Justin Jindra to block for him and the Bee's defense will not give up many long plays with Brugeman, Jindra, Brett Hopkins and awful good bunch of 10 graders maturing. Doesn't hurt when you have a coach like Jim Dooley, whose career record is a stellar 131-59. Look for another huge season for Wayne Brugeman and his Bloomfield pals, but a two week span on murderer's row will tell a lot about this club. The Bees travel to Creighton September 10th and have the mighty Howells at home the next Friday. If they are still standing after those two, look out!

*Zach Call-Mullen -- Well, unless he gets hurt, Call will have his third consecutive 1000 yard season....that's just the way it is in Mullen. Brownie is about as good as there is for an 8-Man coach and those boys up there don't take kindly to losing. This year will be no different. Call ran for 1,413 as a Soph and 1,213 last season and may get more carries than ever this time around. The Broncos have missed the playoffs only 5 times in the last TWENTY years. Think they'll be there this season? Not an option there. If Call has some blocks, he'll get past 1700+.

*Jake Wirthele-Sterling -- What's not to like about this guy? Oh boy, he ran for 1,564 yards a year ago and flattened quite a few defenders in the process. Wirthele wasn't even mentioned in the pre-season last year for Sterling because of guys like Zach Lempka and Neil Pella, but before the season was finished everyone knew who he was....and how. The Jets will have a speedy defense and have some gems in returning all district players, Shane Benson and Allan Parrish. Wirthele will excel on defense this year also and the Jets may just improve on that 8-2 mark.

*Last, but not least.........SETH HOFFMAN-SHELBY. Only the 4th Freshman in history to rush for over a thousand yards! I'm going to honest with you, Hoffman became a friend on Facebook and when I saw his picture, I thought it was a college dude. I know I'm retired and my eyesight may not be as good as it was, but this young "man" is just that. My gosh, 195 pounds and not that slow, Hoffman just plows over folks and he has THREE years to go yet! Tell ya what, circle August 27th on your calendar, hop in your ride and take a jaunt to Shelby. The Giltner Hornets will be in town that night and have one of the most ferocious linebackers I have seen in years in Drew Ott. Bring some ear plugs because the collisions between Hoffman and Ott are going to be deafening. You just to be pulling for Seth Hoffman to be a 4 year 1000 yard Rusher and Shelby always has the kids to field a very fine football team year in and year out. Watch for Hoffman's stats this season.

*Aric Schnacker-Humboldt-TRS-1,015 (This team will be excellent too)

Saturday it will be time to take a peak at Class A and how that may shake out in 2010. Only two 1000 yarders returning here, but the Millard Schools will be hard to beat along with Creighton Prep and a surging program Lincoln Southeast program