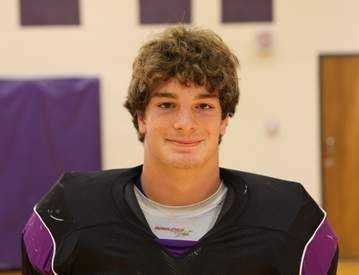 The 2010 High School Football season is close enough to make the butterflies in my stomach start to swirl. The first line of business for this 1000 yard Guy is to list the returning runners that eclipsed the 1000 yard rushing plateau last season. Without further adieu, here is the list of 25 that will be causing nightmares for defenses all over the State:

It is certainly not an every year occurrence that a State Rushing Champion returns to defend his title. Last season Blair's Ryan Randall seemingly appeared from nowhere to ramble for 2,668 yards. Randall is not going to run any :10.9 hundred meter dashes, but he has tremendous football speed and just simply runs over people and gets tons of yards after contact. Last year he benefited greatly from not playing defense and was fresh every time the Blair went on offense. Randall averaged an insane 222.3 yards a game with a per carry average of 8.2. The kid toted the ball and unheard of 327 times in 12 games for the Bears in 2009 after rushing for over 600 as a Sophomore splitting time with another HB. The 6-0, 190 pound bruiser also had 15 straight 100 yard rushing games. Blair may be even better this season, but I just can't envision head coach Darren Harsin saddling Ryan Randall with that heavy of a rushing load this Fall. We'll talk more about Blair in the upcoming days

Wanna talk about another bruising running back? David City's Seth Behrens who tips the scales at 190 is set for an outstanding 2010 campaign. How sweet is it to see the "other" team in David City finally have some success? Ronnie Mimick's outstanding Aquinas program usually dominates the spotlight in that Bohemian Alps town, but the Scouts are grabbing some of that glory and Behrens, who blasted for 750 yards as a Sophomore, is one of the main reasons why.

In future articles, I'll place the spotlight on the other returnees on this list, but in closing I just can't help but mention Brock Sherman and his Crete teammates. Tell you what, Aurora has all the tools in place for a rare 3-peat, but if anybody can put the halts to the Huskies, it could be Chuck McGinnis' crew. I'm relatively certain there aren't too many defenders that relish the thought of seeing Nebraska recruit Ryne Reeves (6-3, 290) leading the way on a sweep with the 220 pound Sherman following closely behind with the pig in hand. These two gentlemen (I will be referring to them as such from here on out) are not the only 2 cogs in the Cardinal machine.....far from it. They return FIVE offensive lineman that go 190, 225, 240, 250 and 290. OUCH! Sherman also has a 205 lb. Fullback (Skyler Verquitto) to help cleans the way also. It also doesn't hurt anything to have the head man's son as the starting QB. Derek McGinnis has the perfect quarterback build at 6-3 and 190. Oh yea, he also has a potential All-State receiver in Ben Muff, who hauled in 17 passes (7 TDS) for 454 yards of McGinnis' total of 791. Every time Muff ran under one of McGinnis throws it was good for an average of 26+ yards......not a misprint, friends.

35 days and counting High School Football fans. We'll be doing a piece nearly every single day and then some. The fever has hit....BIG TIME. Let me know if you have an athlete that deserves a mention here and I'll get some him some kudos. Heaven is just a whisper over a month away!