Centennial's Tyler Wullenwaber...The Best "Under The Radar" Athlete In The State? 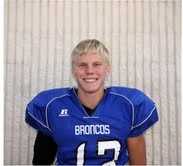 The year was 1980, the sun was scorching and it was opening night for Nebraska High School Football. Why the 1000 Yard Guy chose Adams Central's field to kick off the year I can't tell you, but what I CAN say is that AC's opponent, Centennial High School unleashed an "under the radar" Junior named Donnie Wullenwaber (pronounced Wullen-way-ber) to the tune of 200 plus yards rushing that night. Donnie went on to rush for 1,270 yards that season and needless to say, was no longer under the radar. Now, 30 years later, Donnie Wullenwaber has a son filling his shoes....and how....and his name is Tyler and he's fitting into those big shoes just fine, thank you.

Tyler Wullenwaber of Centennial may not be a household name just yet, but like his Dad, the younger Wullenwaber burst on the scene in football last season as a Split End/Return man for the Broncos and later electrified the Track world by uncorking a 24 Long Jump, then making it a normal occurrence during the regular season. Wullenwaber continued the shock wave at the State Track Meet when he exploded out of the blocks from Lane 7 and wiped out one of the strongest field of sprinters in Class B history in the 200 meter dash. The sun was blazing that day also.....to the tune of 90+ degrees and Tyler became overheated after the race on his way to the long jump and passed out. His goal to reach the elusive 24 foot mark and nab the all-class gold slipped away with the heat exhaustion, but his one and only jump of 22'9 Ľ" was good enough to win the Class "B" Gold by almost a foot. But all was not lost in the heat of that Saturday afternoon in May....Tyler Wullenwaber was just a Junior and had an entire Senior season to achieve his lost goals.

Tyler Wullenwaber's accomplishments on the gridiron during his junior year at Centennial, along with his performance at the Husker's football camp last summer, grabbed the attention of the Nebraska coaching staff. Wullenwaber ran the quickest 40 at the camp and posted the best standing long jump, and the Husker coaches were watching when the 2010 football season opened. Along the way, the well chiseled 180 pound Centennial lad with the blond locks set a slew of football records for the Broncos. Check these out:

These marks were set with Tyler playing on a Centennial offense that ran the veer, which makes it all the more impressive. These marks, coupled with that impressive senior campaign, prompted the Nebraska football staff to extend a walk-on offer to Wullenwaber and he was more than happy to accept. He turned down a nice Track offer from the Huskers and a full ride Football/Track offer from NW Missouri State and verbal FB offers from South Dakota State and UNO to fulfill a lifelong dream of getting a shot to play for the University of Nebraska Football team. And you want to talk a little Track? Now it really gets good.

Tyler Wullenwaber has battled a hamstring injury this entire Track campaign but still managed to post some lofty marks, very lofty He is among the State leaders in the 100 (:10.63), the 200 (:21.6), Long Jump (23-7) and High Jump, soaring 6-9. It's obvious the Centennial ace is a multi-talented athlete, also making honorable mention all-state in basketball this past winter as well to go with his All-State football tag. His win in the 200 out of lane 7 was very impressive, but the disappointment of not winning the all-class gold in the long jump has left him hungry. With the districts next Thursday at Concordia in Seward, Wullenwaber feels he is peaking at the right time. It is within the realm of possibility that he will do the 4 events (100/200LJ/HJ) in that meet and he has set lofty goals that extend to the State Meet in a couple of weeks. Class "B" is a loaded class this season, but Tyler has never shied away from a challenge and appears poised and loaded to make a run at his goals of winning the long and high jumps and placing high in both sprints.

Tyler Wullenwaber has always looked to his father, Donnie for guidance and is the role model he wants to follow. He realized after his Freshman year in high school that God given talent can only carry you so far down the path to greatness. The Centennial standout also knows that motivation by coaches also only takes you so far and the rest is up to you. Wullenwaber relays the fact that he has no problem becoming motivated for any sport, any athletic contest and the opportunity to compete at the highest level possible...and then some. During the summers he lifts about 30 sessions (3 days per week) and puts in the extra effort most of us never hear about. That's what kind of young man this guy has always been, a self-motivated athlete with the desire to compete to the high standards he has set for himself. Occasionally there are obstacles to overcome as there have been this track season, but if I know Tyler Wullenwaber, we had better brace ourselves for a flurry of top notch performances the next two weeks. That's just the kind of kid he is.

While the running backs and the huge lineman grab all the headlines in the high school football recruiting circles around the state, Wullenwaber really embraces the fact some people overlook him. It just seems to fuel that motivation to prove he is as talented as anyone around and if you had ever the opportunity to view his high school football tapes...and I have seen a ton in my years...you would quickly come to the conclusion this "Under The Radar" athlete from Centennial high school in Utica is not going to be flying under that status very much longer to the average high school OR college sports fan. It is obvious a few folks more knowledgeable than some of us (the Nebraska football staff) know the name of Tyler Wullenwaber and you'll be hearing much more the next few weeks and well beyond that. But please, don't just take my word for it. Better yet, keep a watchful eye and wait for this young man to start making strides in the world of college football a few miles down Interstate 80 at Memorial Stadium on the turf where those Huskers play football on Saturdays. The tools are in place, the desire is there, and all that remains is the pieces to come together, and Tyler Wullenwaber has a firm grip on that situation, trust me.