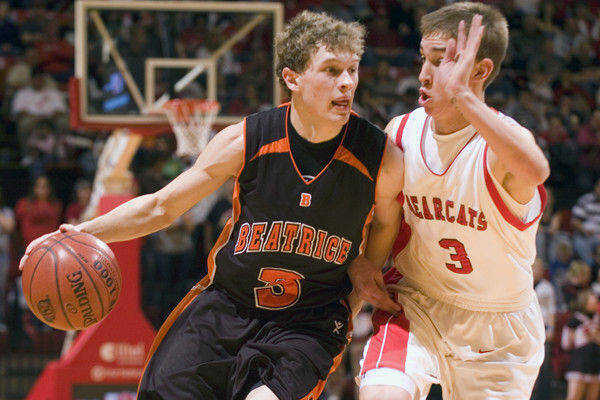 Beatrice All-Stater, Trevor Menke drives to the hoop on a Scottsbluff defender. *Photo courtesy of Journal-Star.

Most of you out there interested in College Basketball are aware of the Sagarin Ratings. These are ratings based on a complex mathematical set of equations that based on things such as strength of schedule, scoring (defensive and offensive) and many other factors. I had often wished I were bright enough to formulate one for high school hoops, but a man named Ken Massey has solved that problem for me.

So.........based on his calculations, and just a smidgen of input from 1000 Yard Guy, here is what the State Tournament would look like at this point in time if it were indeed upon us. Takes a ton of time to figure this out, but this is what transpired after hours of work.

After all these calculations, I can't see why there is any logical reason to hold off on these.........The Green light Is ON, so just how DID "The System" spit it out? Only 2 weeks of regular season left and it's the right time, right place to test the logic.

Ready or not, right or wrong, here it is:

*District 1: Holy Cow, how tough can district be? Humboldt-TRS is the only team to slip in the past two weeks. I'll take Lincoln Christian to edge Syracuse 58-55, then get a "W" over Falls City 58-53 in the Finals. LIN. CHRISTIAN.

*District 3: You knew it, a Neumann/Wahoo Final. Wahoo Neumann has the last word 51-46....WAHOO NEUMANN.

*District 7: All Columbus final and it's Lakeview 46-41 over Scotus.. LAKEVIEW

Not much change from 2 weeks back on the State Tournament Picture:

Comments: Looks like the Bluehawks get their Three Peat. Depending on what happens this Friday with GICC/St. Cecilia, things could change...or not if the "Hawks win again. Crusaders/Norfolk Catholic Semi possibility could create a game to remember. Chadron looks like they could get a friendly bracket draw at State.

Axtell gets Ravenna 58-57 in double OT

This writer sure likes Archbishop Bergan's chances. I think Chris Paulsen has these Knights playing at the top of their game and their schedule is so very strong. Can't ever count Ravenna out, but I like Axtell, but will be able to tell a ton more when I'm on the PA for their game against Ewing Saturday at the Events Center. Nothing wrong with Burwell, but Bergan may be a cut above their capabilities.

Certainly appears that Freeman may be the strongest favorite in any class this season. The "system" seems to think nobody will even come within 10 at State. Not that I have anything against Howells, but how they can beat Humphrey St. Francis TWO more times this season is beyond my thinking. That, my friends, will take some doing, but it is probably a moot point because Freeman can probably beat either one.

The Ewing Tigers grab one last State Title! Two weeks ago, this system picked Hay Springs to nab the Title, but now it has done a reversal. One game that I may have a little bit of doubt about is Hayes Center beating Hampton. The jury is still out on that one as far as I would be concerned. A Sterling/Ewing rematch.....sweet. I just have to insert how jubilant I would be if Heartland Lutheran made it to the D-2 Dance! I love this program and in only 6 short season this bunch has come a long ways, baby.

I'll be back after Districts and we shall check the validity of the Massey System for High School Basketball. The magic season for HOOPS is upon us