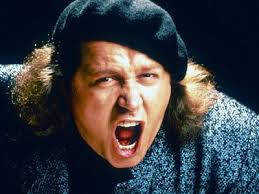 I want to offer some thoughtful and insightful comments on President Obama's handling of various "situations".

Hey I want to be positive. I really do. This is why I haven't written for a while. I look a various issues, and all I can think of to say anymore, in the spirit of Sam Kinison, is Aaaaaarrgg!

So let's give it a shot and see if we can find an area that the Obama regime is handling well. I'd really like to find one, or even two.

How about Border Security? Aaaaaarrgg!

Let's try race relations. Aaaaaarrgg! We were told that the election of a "black" President would heal that big ole slavery sore that Obama picks at on a daily basis.

This is getting silly. We can come up with something that Obama is doing right. It is easy to jump on him for countless expensive vacations, golf, and more golf, and even more golf, brazen lies, endless race baiting, arming terrorists abroad and cartels in Mexico, and gutting the military.

And we have not even talked about the Health care disaster that is ObamaCare. That rates a huge AAAAAAAAAAAAAARRRRRRGGGGG!

But, I want to be positive about something Obama is doing.

Hey, I have it! Obama is exposing Liberalism/Progressives/Socialists for the disease it really is. He doesn't mean to, but he is. Empty solutions, false promises, lies, class envy and promoting racial tensions, all demonstrate the cruel joke of leftist thinking.

Obama is also exposing the media for what it is. The media, for the most part, has shown themselves to be the lapdog sycophantic Liberal worshippers they really are. Distrust in media at an all time high.

Obama has also further exposed the race hustling industry of which he is a big part. The race merchants, whose profits are the discontent and anger of those they claim to represent, is in full swing.

How vile are these folks? And they have been exposed to anyone who cares to be honest intellectually.

Another positive is that Obama has exposed much of the Republican Party Leadership for the spineless wimps they really are. While Obama sets fire to the Constitution and the economic well being of this country, the Republicans are sucking their thumbs and hiding in the closet. Afraid to move against a lawless President.

Look, the GOP leadership are either cowards, or they are in on the plan to bloat government, and install a unionized bureaucratic dictatorship to rule instead of the Constitution they all swear to uphold and defend.

Conservatives are forever wise to the GOP leadership, the RINOs that will sell us out, bend to Liberalism, when they need to stand.

So I can thank Obama for that.

I want to be positive, and all joking and harsh criticism aside, one learns to trust God, and keep smiling. After all, we have more than two years to go with this guy.