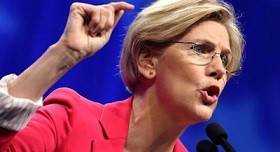 The Author is Dave Blount. The article not only exposes Ms. Warren for goofy Marxist that she is, is also exposes how the detestable left will campaign for the next 2 1/2 years, and forever if they are successful.

This is worth your time to read. Thank You.

"At first she was good for a laugh: a clueless limousine leftist who used Affirmative Action to establish herself at Harvard by pretending to be part Indian. Expressing a seemingly deliberate parody of far left ideology mainly in hysterical shrieks, she was more like a comedy act than a legitimate political candidate. But then she was elected Senator.

But now that she wants to be president, it's time to stop laughing. Liberals are ready to bail on Shrillary. The Historic First Black President has been an unmitigated disaster, so now they will push the Historic First Female President. If it isn't going to be Shrillary, it will be Elizabeth Warren.

As Mitt Romney found out the hard way, we have reached the point in the Democrat Death Spiral where it doesn't matter how unqualified or even demonstrably incompetent a candidate Democrats run. Anyone capable of reading the following off a Teleprompter is likely to win:

"I will confiscate the wealth other people create and give some of it to you."

But Elizabeth Warren brings even more to the table. Evidently inspired by the 25 Points of the Nazi Party, her Eleven Tenets of Progressivism will terrify anyone who cherishes the hope that America might recover from Obamunism.

1. "We believe that Wall Street needs stronger rules and tougher enforcement, and we're willing to fight for it."

Warren regards herself as the Mother of Occupy Wall Street. Yet she backs a corporate welfare bank. Basically "stronger rules and tougher enforcement" means doubling down on the crony capitalism that has characterized the Obama regime. Investors will not be able to twitch a finger without federal permission. On the upside, they won't be able to lose money, because they will be subsidized to the hilt and bailed out if anything goes wrong. Investments will be made on a political basis. Winners and losers will be chosen by Elizabeth Warren. The long-term consequences of replacing a free market economy with a command and control centralized economy are obvious to any student of Soviet history.

2. "We believe in science, and that means that we have a responsibility to protect this Earth."

By science, she means Lysenkoism (i.e., lunacy imposed as science for political reasons), as the second clause makes obvious. The tyrannical EPA will continue to run amok under Warren, destroying whole industries for ideological reasons and throwing people off their own property on a whim.

3. "We believe that the Internet shouldn't be rigged to benefit big corporations, and that means real net neutrality."

That means the federal government running the Internet. Do you like PBS? Would you like to see it on every channel? Fine, then you won't mind an Internet run by people like Warren.

4. "We believe that no one should work full-time and still live in poverty, and that means raising the minimum wage."

Raising the minimum wage not only correspondingly raises unemployment by lifting the cost of labor above the market price, but increases long-term government dependency by making it impossible to reach the first rung on the ladder to economic success. Raising the minimum wage is an act of economic malice intended to force more people onto welfare.

5. "We believe that fast-food workers deserve a livable wage, and that means that when they take to the picket line, we are proud to fight alongside them."

Hamburgers will be sold by vending machines under President Warren; otherwise it will not be economically feasible to sell them at all.

6. "We believe that students are entitled to get an education without being crushed by debt."

The extravagantly expensive farce higher education has already degenerated into will only get worse. Not ready for the real world? No worries. Just spend 20 years working on your PhD in Queer Studies and stick taxpayers with the tab.

7. "We believe that after a lifetime of work, people are entitled to retire with dignity, and that means protecting Social Security, Medicare, and pensions."

To ensure that everyone gets a pension, the federal government will confiscate your 401K.

Enforcing "equal pay for equal work" will entail all wages being dictated by Washington, on the basis not of merit but of political correctness.

To ensure that perverted sexual liaisons are regarded as "equal" to holy matrimony, homosexuals will be granted ever more protections and privileges, so that hiring them will be mandatory and firing them forbidden.

10. "We believe that immigration has made this country strong and vibrant, and that means reform."

What "reform" means coming from Warren is amnesty. Combined with extravagantly lavish welfare benefits and a wide open board, it means the total eradication of the American people, who will be washed away by a tsunami of Third World parasites. This process is already underway under Obama.

Nothing could be more disgusting than to be ruled by vermin like Elizabeth Warren. But at this point it is impossible to deny that nearly all Democrats would vote for her against any Republican -- and more Democrats are pouring over the open border by the millions."