Holder to Investigate an Outhouse 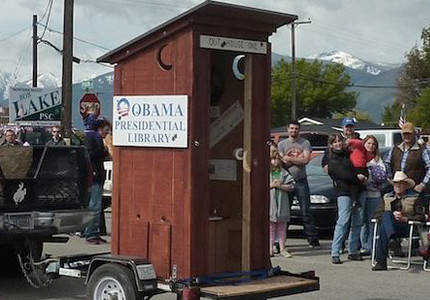 United States Attorney General Eric Holder is going to get involved in Nebraska. You would think the Nation's Chief Law Enforcement Officer might want to investigate some real crimes.

For example, IRS abuses, Fast & Furious, illegals being dumped in Nebraska without the consent of our governing authorities.

But No! Mr. Holder has decided to investigate a parade in Norfolk Nebraska featuring a float with one mans opinion of what Barack Hussein Obama's Presidential Library should look like.

Outhouses do not deserve this kind of abuse. Their job is tough enough.

The Justice Department has ventured to Norfolk with only one purpose, to discourage free speech, and to try and punish those who would dare speak out against Mr. Obama.

Obviously, I am taking a cheap shot here.

But this insanity of the constantly offended gets under my skin.

Remember GW Bush was hung in effigy, and those on the left never said a word.