It's about people and family 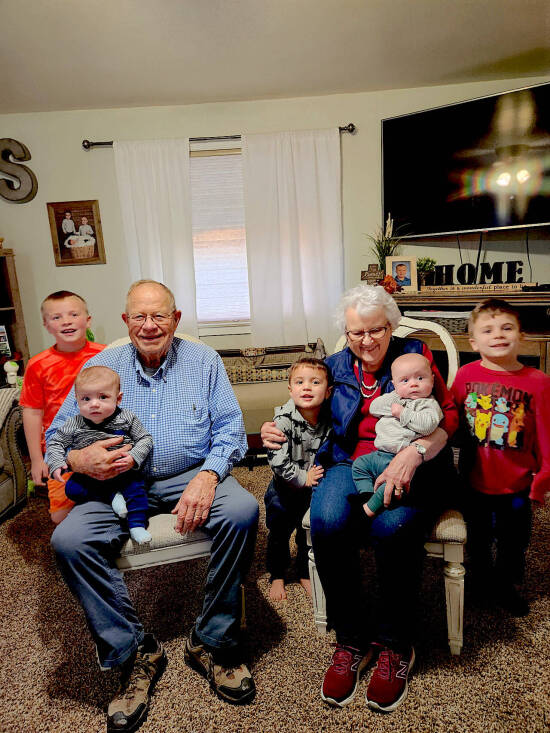 Dick and Ann Trail with their great-grandchildren for the holiday.
Courtesy photo

Did you notice? The UN projected that the world population, we humans, reached 8 billion souls on November 15th, just 14 days ago. No celebration just a noteworthy fact. Now consider that the population at the time of Christ was around 200,000 for the entire world. Gee there have been some changes made in those 2000 years passing in time.

Archaeologists tell us that over the 4 1/2 billion years since our earth was formed there have been cycles of the percentage of CO2 in our atmosphere that have had tremendous effects on our weather. In the past those huge increases in CO2 have been due to volcanic eruptions spewing huge amounts of carbon gas into the atmosphere. CO2 is of course the breath of life for the worldís plant life which consume it like we consume O2, oxygen. The plants tie up the carbon and release the oxygen just as we, and all animal life, breath in the oxygen and release back C02 so there is a balance between the gases that in turn also affects the worldís temperature.

During the cycles of an overabundance of carbon in the atmosphere, the earth naturally affixed that excess into compounds and buried it in the form of petroleum and coal.

Today we have elite progressive politicians in Washington who have decided that the current build-up of O2 in our atmosphere due to our burning coal and the use of petroleum products to produce electrical power and provide transportation is directly responsible for what they perceive as ďclimate changeĒ or unacceptable global temperature rise. Higher temperatures will melt the ice caps and that water will cause the ocean to rise to drown out our coastal areas. Hence the current edicts to stop coal mining, stop petroleum drilling and invest in alternate (unreliable), wind and solar, to produce our electrical power needs. They also indicate that they want to ban the use of petroleum fuels to power transportation, our automobiles and trucks, that provide transportation of goods in commerce. All those things produce CO2 into the atmosphere and cause climate change. One little caveat though and I donít hear much about banning the jet airplanes that they like to use in their ďnecessaryĒ travels.

Evidently, those current powers that be do not consider that our world does not self-correct the balance between O2 and CO2 and we are in an interglacial time at present. Some 11,500 years ago southwestern Nebraska, where we live today, was on the edge of an ice sheet that stretched clear to the north pole. There were no plants to absorb the CO2 in the air and no food for animal life to live on. So maybe it is a good idea to let our modern ways flood CO2 into the atmosphere to keep our planet heated to prevent another ice age. Such a move would free our coal production to produce cheap reliable electricity and allow the petroleum industry to again flourish and allow economical transportation and mechanical farm production. No, I fear that the elite progressive politicians in Washington love the idea of holding control over our population and would never listen to an opposing viewpoint. Your vote is important!

So the Thanksgiving Holiday has come and gone. In some ways, Grannie Annie and your old columnist feel fortunate to be enjoying our senior years. We were invited by our eldest granddaughter to participate in her wonderfully made family feast. Roast turkey, ham, artichoke dressing, green bean casserole, a really good Brussel sprout butternut squash dish and later genuine homemade pumpkin pie peaked with cool whip and her cheesecake topped with caramel pecan. There may have been more! Still, the best part was the company present a daughter, grandson, the special granddaughter with her husband and their (our) five great-grandsons the youngest being twins. All happy family and a special blessing to we old folk.

Pondering a bit that is kind of how families worked in the days of my youth. It was the days before nursing homes, independent and assisted living facilities and the old folk simply moved into the home of a son or daughterís with the grand and great grands. People were not so mobile then and most stayed close to the location where they were born and grew up. Then too divorce was not so common and single-parent homes were few. It is not that the changes were good or bad but we have left some good things behind to get to our now modern lifestyle.