MHS classmates meet up after 63 years to celebrate 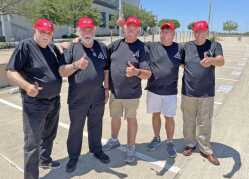 Jim Dorram, from left, Jerry Daniels, Bob Thompson, Don Taylor and Don Morgan all graduated from McCoo High School in 1959 and recently got together to celebrate their 81st birthdays. They had shirts and hats printed with “81,” that made some people think they were celebrating a military unit milestone, Taylor said. Courtesy photo

It was the first time they all got together since graduating high school. Jim Dorram, Jerry Daniels, Bob Thompson and Don Morgan met at the home of Don (Mary) Taylor in Denton and spent three days reminiscing and re-living their high school days. They also talked about memories of growing up in McCook, such as delivering newspapers for the McCook Gazette as their first job.

“It was great time walking down memory lane,” Taylor said via email. The guys broke open four years of Bison annuals to a whirlwind of reminiscing and memories, he said. Laughter and tears flowed and it was amazing how the classmates were able to pick up where they left off, some 63 years ago.

“While (we) all have had diverse careers and lives, it was evident that our friendship over the years remained solid,” Taylor said.

The weekend culminated with a tour of AT&T stadium in Arlington, home of the Dallas Cowboys. All five agreed that they would meet in Hastings, Neb., at the home of Jerry Daniels in June of 2026 to celebrate their 85th birthday.

To commemorate the event, the guys had shirts and hats printed up with 81 on them. “People thought we were celebrating some military unit...the 81st something or other!” Taylor said.

The five classmates were:

Jim Dorram was a drummer in high school and played in bands around Denver for many years. Jim retired from owning his own business in Denver and now lives in Mansfield, Texas.

Don Morgan played trumpet in high school band and also played in bands around the McCook area. Don retired as a commander in the Navy. Having flown hundreds of hours on and off aircraft carriers all over the world, Don now lives in England with his wife, Eileen.

Jerry Daniels retired as an art director for a large company in Hastings, where he has lived for the last 50 years. He is a very accomplished painter and sculptor.

Bob Thompson lives in Tucson, Ariz., and is recently retired from owning his own photography company.

Don Taylor retired from Coors Brewery and recently moved to the Denton, having lived in the Denver area for 35 years to be near his two daughters.