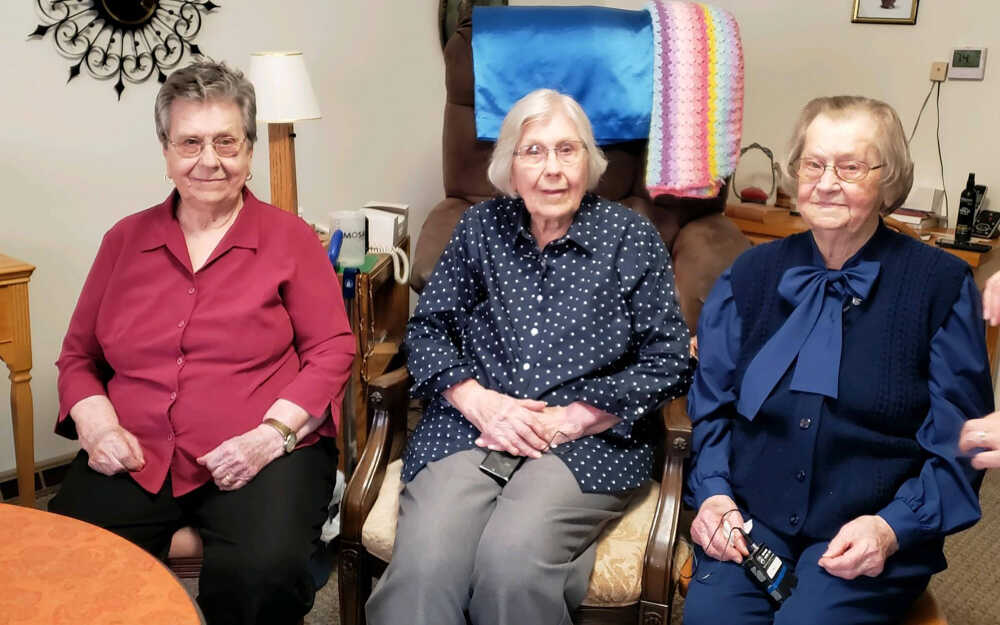 The Holub sisters, from left, Frances Kompas (age 100), Lucy Pochop (102), and Julia Kopriva (104) all live in Atwood, Kansas in the same county that their grandparents, immigrants from Czechoslovakia, homesteaded. The three women have all lived in Rawlins County their entire lives, and they remain close today. Frances celebrates her 100th birthday today.
Courtesy photo

ATWOOD, Kan. - Florian and Frances Holub had three daughters – Julia, Lucy, and Frances. They raised the girls on a farm in Rawlins County Kansas. The girls’ grandparents, both maternal and paternal, immigrated from Czechoslovakia and homesteaded in Rawlins County.

All three sisters are currently living in Atwood, Kan. – Julia and Lucy have apartments next to each other in an Atwood apartment complex. Frances also had an apartment in the same complex until 2019 when she moved to Good Samaritan Center in Atwood.

They all three belong to Sacred Heart Church, where they attended as children and where they were married as young women. They all attended school, to the eighth grade, in Beardsley, a Rawlins County community that is no longer in existence.

Oh, and by the way, as of today, they are all over 100 years old. Rosalie Ross, who works for the Rawlins County Square Deal, has written stories to commemorate each sister’s centennial birthday, and she shared those stories with the Gazette.

Julia, born Nov. 5, 1917, told Rosalie that she met her husband, Paul Kopriva, at a birthday party. Since they didn’t have telephones, they courted via letter and occasionally got to see each other in person. She married him on her 18th birthday. “My white satin gown had puffy sleeves to the elbow with fitted lace to my wrists. It was beautiful. I carried lilies of the valley,” Julia told Rosalie in a 2017 interview.

Julia and Paul were farmers and had five children, Rita (deceased), Tom, JoAnna, Marty, and Paul (deceased). Julia described life on the farm, churning butter, raising chickens, and selling eggs and cream in town. She also remembered the arrival of Rural Electric Association. “It was like a little bit of heaven. We had a freezer, refrigeration, which meant no more carrying food to the cellar to keep it cool, and so many appliances that we take for granted today.”

She also recalled getting their first television set. “Before that, we listened to the radio, often as a family, to hear Mr. District Attorney or Fibber Magee and Molly.”

Lucy, born June 11, 1919, told Rosalie about going to school in Beardsley as a young girl. “Times were hard,” Lucy recalled in a 2019 interview. “Teachers boarded with one of the families. We had one teacher who wore the same brown dress every day until Christmas then she got a green one and wore it until school was out in the spring.”

Lucy said she had always known her husband, Victor Pochop, “but then he became special”. They married in 1952 and took over her father’s farming operation. “I lived in the same house for 85 years,” Lucy told Rosalie. Like her sister Julia, Lucy remembered getting electricity on the farm. “I sure did have it easier than my mother. We had REA and electric conveniences. People in my folks’ day worked really hard and I’m glad this next generation has it even easier.”

Lucy and Victor had two children, Victor, JR, and Valyne.

And the baby of the family, Frances, born Nov. 11, 1921, celebrates her 100th birthday today. She told Rosalie in an article that was published last week in the Rawlins County Square Deal about dressing for school as a child. “We would get dressed - long cotton stockings with garters or garter belt to hold them up, then cotton bloomers with elastic at the waist and legs and underskirt and then the dress. I’m youngest so I got the hand-me-downs.”

She also told Rosalie that she has fond memories of her courtship and wedding to Albert Kompus. “I met Albert at a dance at Tin Hall,” she said. They were married May 22, 1946. “It was after the war and you still couldn’t get good fabric. I had a white knit long dress that later just fell apart. Good thing it lasted through the wedding,” Frances laughed.

Frances told Rosalie about a 1964 trip to the World’s Fair in New York City. “It was so exciting. We took our two kids on a bus tour from McCook. There were wonderful rides and sights. We rode downtown on the subway and even rode on a helicopter with the side door open.”

Frances and Albert had two children, Frances (Allacher) of McCook and Albert, Junior.

When the widowed sisters lived side-by-side at the Atwood apartment complex, they took turns almost every evening for several years hosting a pitch, pinocle, or domino game. Francis told Rosalie that her middle sister, Lucy, probably won the most often because she likes to bid high.

In almost every interview, the ladies relayed fond memories of Beardsley, Kansas where they attended school and traded farm produce and eggs. When they were children, “Beardsley had two grocery stores and a bank and almost everything you’d expect in a little town,” according to Julia.

They remembered the excitement of having the train come through town; one time it was carrying a car load of apples and people brought their containers and bought the fruit right at the track. With no boys in the family, they all recalled the many chores they were required to do to help out on the farm.

But most importantly, they all cherish the fun times they had as kids. Sledding on shovels, dressing kittens, playing baseball, hopscotch, and jumping rope. Julia probably summed up the sentiments of all three sisters in 2017 when she told Rosalie, “I thank the Lord every day for a good life and a wonderful family. I have hopes for my grandchildren and their children. I hope they can all go to school, have good health, go to church, and that we all pray for unity and peace in the world.”