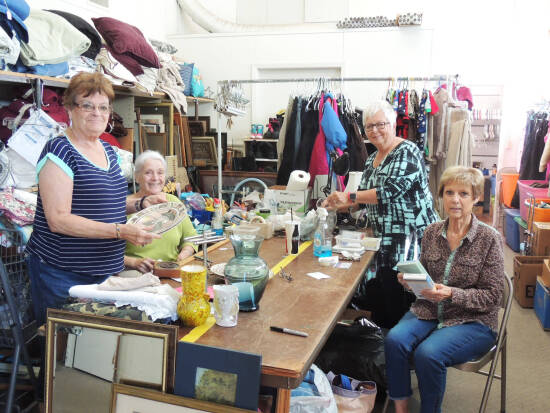 McCOOK, Neb. — There have been some interesting items donated to the Helping Hands thrift store in McCook through its 60-plus years of operation.

There was the stuffed boar’s head. A 16-foot canoe and trailer. What looked like a Roman soldier body armor. Then there were the vintage items like the Native American headdress and a baseball bat from the 1920s.

Operated by the McCook United Methodist Women, the store still sells donated items and gives all the proceeds, minus maintenance and utility costs, to local and national non-profits and ministries. After six decades, that means probably thousands of dollars have been distributed, said Kathy Eaton, who with Marilyn Anderson and Darlene Loper volunteer as store coordinators.

“Every dime is divided out,” Eaton said. “We make sure of it.”

That’s because they’ve been doing it for years. Eaton said prior to 1956, the group raised money for ministries through white elephant bazaars and monthly rummage sales. In the 1970s, they moved to a basement location in downtown, that gradually expanded to include nearly the entire space. But the stairs were hard to maneuver for volunteers and donation drop-offs. In 2017, they moved into their current location along U.S. Highways 6-34.

With the average age at 75, give or take a few years, volunteers are kept busy weekday afternoons and Saturdays, sorting, pricing and working the cash register. New clothing is added each week and previous clothing is rotated out. Bedding that is too old to sell is donated to the McCook Humane Society and cardboard boxes and plastics are taken to the local recycling center. And everything is checked and double-checked to make sure it works, whether it’s pulling up zippers or plugging in toasters.

Right now, with the weather turning colder, popular items are bedding and comforters, but this can change from day to day, Eaton said. One day there can be a run on coffee pots and lamps and the next day, it will be men’s boots.

Women’s and children's clothing are the most popular items sold, followed closely by men’s jeans. But just about everything else is for sale here, such as kitchen utensils, tools, jewelry, toys, seasonal decor and medical equipment like walkers, canes and crutches. Even movies on VHS are regularly sold, as senior citizens still have their VHS players and find them easy to use.

Eaton said the store is the most busiest during the twice-a-year brown bag sales, when everything that fits into a paper sack is sold for $4. Then there’s the Christmas season, when often there is a line waiting for the store to open. There are 60 to 70 totes in the basement full of decorations and every strand of light is checked to make sure it works, Eaton said.

Clothing and other items are being given away for free to families in emergency situations, such as a fire. They also do a free give-away of kids clothes in August for a couple of days. Eventually, what doesn’t sell here is sent to the Goodwill in Grand Island, Neb., where it’s recycled or sold.

But sales are brisk at the Helping Hand, especially since they moved to their new location. Customers increased by fivefold, Eaton estimated, including those coming from Colorado and Kansas and those looking for items to sell online.

Volunteers price those items judiciously, like vintage quilts and painted china, as they know they can fetch more than a few bucks from online sales. There have also been instances when people tear-off tags from something and then take it to the cash register, hoping to get a deal. So the new policy is no tag, no sale, no exceptions.

There’s also a security camera but no one has ever been prosecuted. As one volunteer put it, if you have to steal from a thrift store, then “that’s between you and God.”

Besides, “if they really need it and ask nicely, we’ll probably just give it to them.”