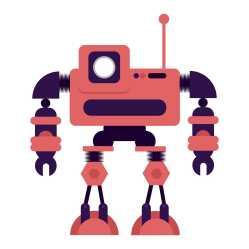 McCOOK, Neb. — The McCook City Council was asked to approve police robots at a special meeting today at the City Council Chambers.

The possibility of savings is tremendous, City Manager Nate Schneider said. “There would be no automatic pay raises and the newer models have rechargeable batteries, adding to the savings,” he told the council.

“Using them for domestic disturbances and drug busts would save a lot of wear and tear on our current police staff,” he said.

The council was on board with the idea but were not sure how many to order. “Do we want an entire staff of them or just like one or two on the police force, who can go out on more routine calls, like dog at large calls?” wondered Councilman Jerry Calvin. They could also be used for less-risky tasks, he said, “like bringing back Taco John’s for the night shift.”

Mayor Mike Gonzales liked the idea of going high-tech. “McCook has so much to offer, this would be another added benefit for our citizens that would utilize the latest technology,” he said, who had trouble turning off his cell phone during the meeting.

Initial start-up costs would save money in the long term, said Councilman Gene Weedin, who added, “and don’t forget to choose your natural gas supplier by April 23.”

Councilman Jarod Muehlemamp said costs would differ depending on which programs would be used, such as remote control, artificial intelligence or a hybrid of each. “We have an obligation to our citizens to get the most cost-effective model out there,” he said and advocated for a preliminary study. Councilman Darcy Rambali agreed and said choosing the right delivery service is important, too.

“We don’t want to get a bunch of pieces shipped to us damaged and broken, because we skimped on the shipping method,” he said.

For more information, see the date above.

Comments
View 7 comments
Note: The nature of the Internet makes it impractical for our staff to review every comment. Please note that those who post comments on this website may do so using a screen name, which may or may not reflect a website user's actual name. Readers should be careful not to assign comments to real people who may have names similar to screen names. Refrain from obscenity in your comments, and to keep discussions civil, don't say anything in a way your grandmother would be ashamed to read.
Respond to this story