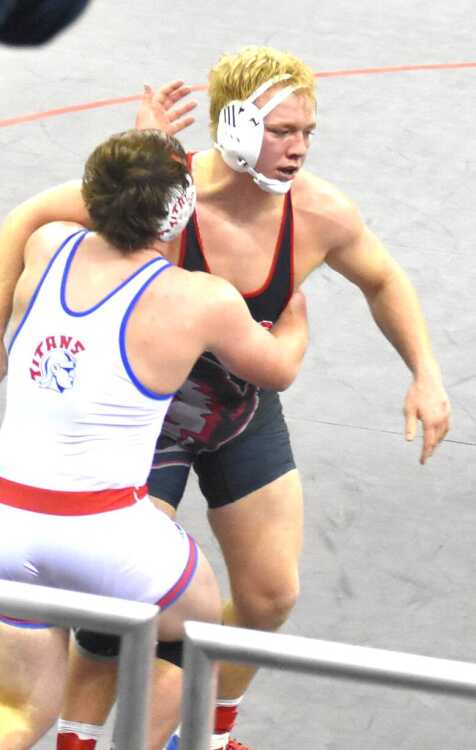 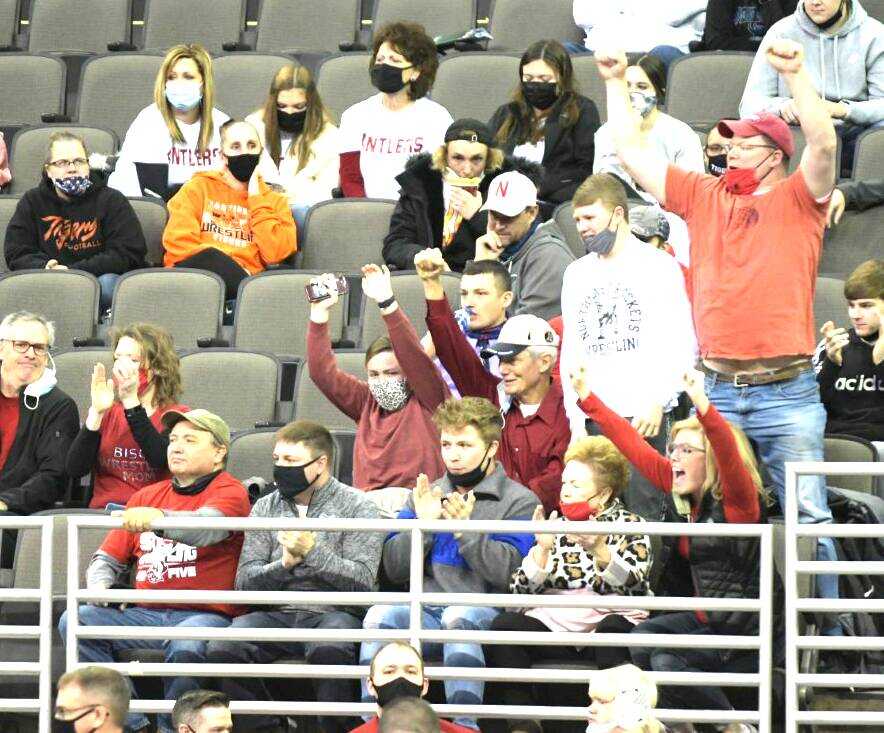 McCook fans, friends and senior Alec Langan's family had plenty to cheer about in force during the Class B state wrestling tourney at Omaha's CHI Health Center last weekend.
Diane Stamm/For The Gazette

“We stayed with my brother who has a home there (in Omaha) and yeah, there was a ton of snow,” McCook High’s all-time leader in consecutive wins and pins revealed. “It was tough but I took off running, hopped over some puddles and got to church on time. Then I had to get homework done.”

“Things are about the same, except I finished with a really great memory,” Langan added about his Class B 220-pound state title. “And that’s really what it’s all about. Making good memories.”

Perhaps that’s why Alec was smiling as he emerged from the tunnel at CHI Health Center Saturday night.

Sure, he was thrilled to finally reach his first state finals match cappingall those snowy road trips, practices and four consecutive state tournaments.

Yet A.L. was really enjoying a few moments with another early “coach” just before he walked on to the ultimate floor.

“What I’ll really remember is my brother Eric (former state medalist) came down and helped me warm up,” Alec explained Monday afternoon. “Then we talked for awhile, but not one bit about wrestling. We talked about girls, philosophies, all sorts of things. I think it helped me not get too worked up.”

The work was tough enough considering Norris state finals foe Dylan Meyer owned 50 wins this season and only one defeat.

Meyer didn’t even allow one point to Langan through two periods despite several Alec takedown attempts.

An astute insight considering they were tied 1-1 through three full periods of finals wrestling. Both had only been able to score one point with an escape.

However, Alec believed one huge factor still gave him an ultimate edge:

“Plus coach Umscheid makes us run,” he said. “Run a LOT.”

Perhaps Umscheid in his bold white suit and shiny shoes was feeling even more confident than Alec.

“I didn’t think he (Meyer) could take down Alec,” N.U. said. “I mean, you are talking about a kid who has been taken down I think once ALL season.”’

Sure enough, A.L. moved behind Meyer for the first best OT takedown attempt.

Alec admitted he’d nailed not once, not twice but about SEVEN times to take Meyer down during this title match.

“I thought the eighth is going to work,” he said.

It did. Alec got his takedown to score two incredibly important OT points.

Meyer still had some time for a response, but never came close as Alec finished a 3-1 state title victory.

Would it now be time for backflipping like a gymnast or dancing some awesome jig that ESPN now believes is more interesting than most sporting events?

Come on, it was time to slam dunk a basketball or do something seen about 10 thousand times before in today’s showboating world?

A.L. never thought one second about anything except helping and encouraging his opponent because...

“I’ve been there before,” he said as Alec helped Meyer to his feet before they shared a quick hug. “I told him great match, just like a guy did for me when I lost here in the semifinals.”

“It’s just the way I was taught,” A.L. added. “I don’t know him (Dylan Meyer) that well, but he seems like a good guy and we’ll be Shrine Bowl (football) teammates. Why burn any bridges?”

Alec certainly built a bridge on Twitter where hundreds of fans praised his post-victory behavior.

Yet it’s all about helping others as A.L. will start doing even more while studying to be a pharmacist at Chadron State College this fall.

No wrestling. No football despite being an all-state linebacker.

“I will miss hanging with the team. That was the best,” he concluded.