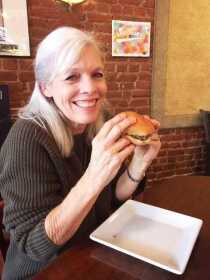 Susy Bair, Culbertson, enjoys an original jiffy burger at Sehnert’s. She and her husband, Bruce, own 308 Coffee Roasting, a local line of coffee also offered at Sehnert’s.
Lorri Sughroue/McCook Gazette
Order this photo

McCOOK, Neb. — It was a family vacation in the 1950s that spurred the creation of the famous jiffy burger recipe.

Gordon Sloggett of Stillwater, Okla., gets a kick out of the enduring legacy of the lowly jiffy burger, a secret sauce of mustard/mayonnaise/chopped dill pickle (?) served on top of seasoned hamburger in a bun. That’s because it was originally created at the Dairy Creme that his parents owned in McCook from 1950-57.

Sloggett said his parents, Wes and Dorothy Sloggett, first bought a Dairy Queen in McCook in 1950. However, franchise fees were high, so Wes and Dorothy changed the name to Dairy Creme in 1951. 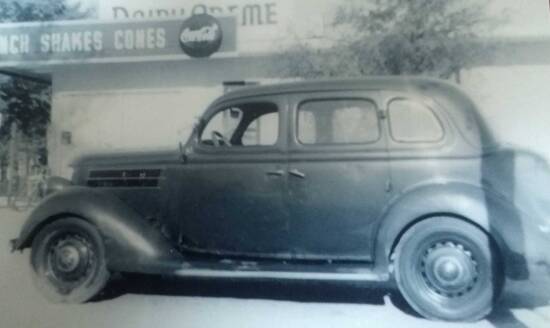 A Ford is parked at the Dairy Creme in McCook in the 1950s, on West B. The Dairy Creme is the home of the original jiffy burger; it later became Peter’s Dairy Creme for many years.
Courtesy photo

The business was on the top of B Street, where Outlaws Bar is located now. It was drive-up only — you had to get out of your car and walk to the window — with no seating available, Sloggett said, who is a 1954 McCook High School grad. He remembered his parents working 12 to 14 hours a day during the busy season. “They did it on their own, basically,” he said. It was closed during the winter months and it was Christmas of 1952 when the family took a vacation to California.

On the way back home, with three hungry kids in the backseat, the family stopped in a diner in a tiny town in New Mexico. “It was New Year’s Day and there was hardly anything open,” Sloggett recalled.

His younger brother and sister ordered burgers that came with a special sauce. His siblings loved the sauce and his mother, intrigued, talked the cook into giving her the recipe, Sloggett said. 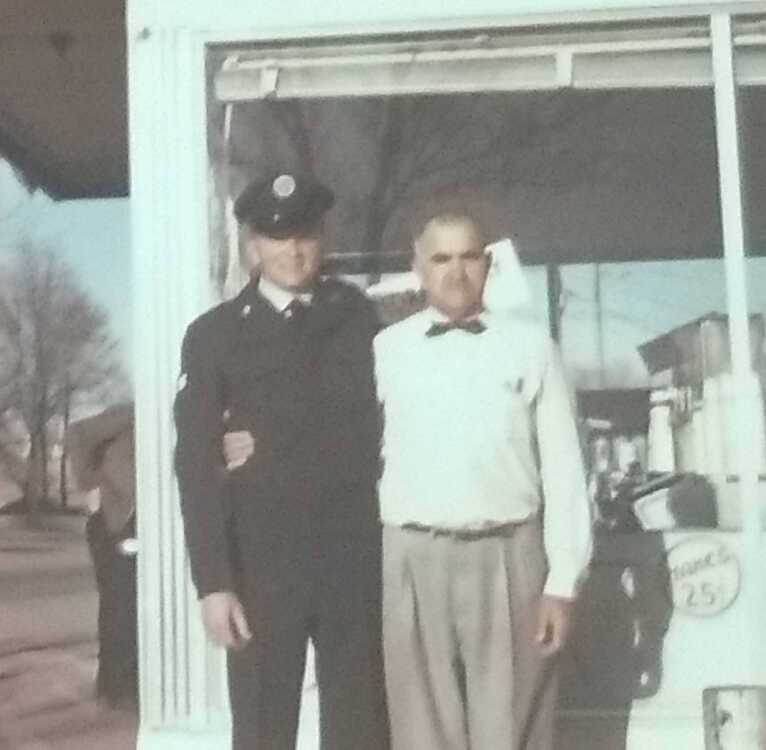 In 1955, Gordon Sloggett, left, newly enlisted in the United States Air Force, stands with his dad, Wes Sloggett, in front of the Dairy Creme his parents owned in McCook. Gordon is a 1954 McCook High School graduate.
Courtesy photo

Once back in McCook, she experimented with the sauce for a few months, adding and removing ingredients so the consistency wasn’t too soupy or too thick and it tasted the way she wanted. In the summer of 1952, she christened them “Jiffy burgers” and added it to the Dairy Creme menu. Immediately, customers loved them, Sloggett said. Each jiffy burger cost 20 cents and on the weekend, you could get six for a $1, served on buns from the local bakery.

In 1957, his parents sold the Dairy Creme to the Peter’s, thinking they were done with the fast-food business. But that didn’t last long: they moved back to Broken Bow in a year and bought another Dairy Queen from friends.

The business stayed in the family for years, with Gordon’s brother, Jerry, first taking over the business and then Jerry’s son.

And the jiffy burger recipe lived on, sold for many years at the Broken Bow Dairy Queen under the name, “Tasty Burger.”

“At family reunions, we always have Jiffy burgers and Tasty burgers but it’s the same thing,” Sloggett laughed.

Matt Sehnert recalled the special promotion that took place for the official handing-over of the recipe by the Wiemers, with a day set aside for Sehnert’s to start selling them. He said at first, he was doubtful when Gene Wiemers told him that jiffy burgers would be flying out the door but when the day arrived, there was line outside the bakery and around the block, with the phone ringing constantly with people trying to order them. “We finally had to take the phone off the hook,” he said, estimating about 1,500 were sold that day.

And jiffy burgers are still a favorite, Sehnert said. “I call it the McCook sandwich, it’s pretty unique, although there are variants of it sold in other restaurants,” he said. “We have the regulars who order it and then we have the people who are visiting, during the holidays and summer, who come here bringing their kids, saying this is what I had growing up.”

For the hard-core jiffy burger fan, Sehnert’s sells the sauce, along with the seasoned meat and buns, separately. Every now and then, a customer will ask for the recipe, but Sehnert said he never gives it out. “I tell them, that’s how we make a living,” he said.

Jiffy burgers also were served at the gubernatorial inauguration for Ben Nelson. Nelson, who grew up in McCook, later became Nebraska’s governor and a U.S. senator. Slogget said at a Heritage Days event in McCook a few years ago, “I asked him if that was true, that they served Jiffy Burgers at his inauguration, and he said they were,” Sloggett said. “That was kind of neat.”

Nowadays, various jiffy burger recipes routinely pop up in the internet, a testament to its popularity and to his mother’s resourcefulness.

“My mom would be so proud, that people can still get jiffy burgers,” Sloggett said.