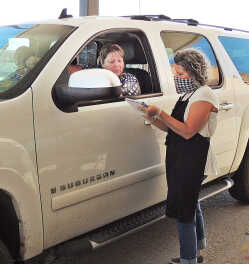 Paula Sandburg checks an order with a customer, at the drive-through farmer’s McCook in McCook.
Lorri Sughroue/McCook Gazette
Order this photo

McCOOK, Neb. — Micro greens and gourmet mushrooms can be hard to find at grocery stores, but a new drive-through farmer’s market is making them available for everyone.

“We like to sell things you can’t get anywhere else,” said Paula Sandburg of heritageacres.net, the online website she and her husband, Chris, operate that local vendors are using to sell produce. “There is a wealth of really good food here in this area and I wanted to make it convenient for people to get it.”

Customers can order their produce online from Friday through Saturday, the selections varying by week, with items ready to be picked up the following Tuesday at McCook Christian Church in McCook. Sandburg and her husband have sold their beef on the website for four years, but when the coronavirus pandemic hit in Spring, they sold out of everything in 24 hours, she said. 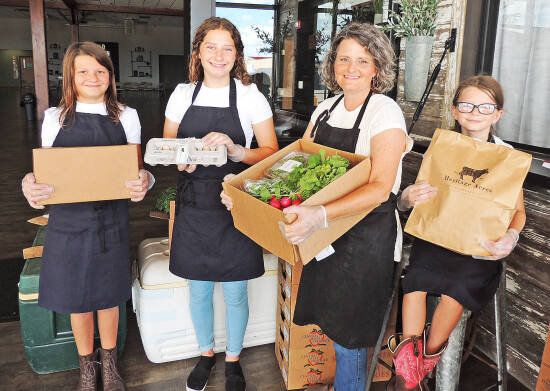 Paula Sandburg, second from left, gets lots of help at the drive-through farmer’s market from her children, Aimee, 12, from left, Alaina, 15 and Olivia, 9.
Lorri Sughroue/McCook Gazette
Order this photo

That’s when she decided to open up the platform to other local producers, she said. “I know how hard it is to build something up from scratch and I wanted to offer support to other small farmers, get them online to develop their own base.”

In its fourth week of operation, response has been good for the online purchases and the drive-through, Sandburg said. “I’m really enjoying this, I like helping people live and eat well. It’s not fancy food, but good, healthy food.”

And now, more than ever, people like to know where their food is coming from, she said, firmly believing that local is the new normal. As an avid avid supporter of all small farmers in the area, Sandburg is willing to do what she can do to help. “Most farmers don’t farm for the money but because they love the land and the lifestyle,” she said.

Being good to the land also plays a role. She and Chris practice regenerative agriculture on their land, an approach that focuses on rehabilitating and enhancing the entire ecosystem. “Basically, we want to make the land better than when we got it,” she said.

Her vendors, too, use organic methods, foregoing the pesticides and chemical fertilizers. Produce grown locally are fresh and nutrient-dense, she said, with an explosion of color and taste you can’t get from vegetables shipped from across country. One of the vendors on the website, The Prairie Garden of Madrid, Neb., “makes the most beautiful produce,” she said, that tastes like vegetables are suppose to taste. “Like the carrots, you can really taste it, it tastes like a carrot.”

They also produce microgreens, expensive to buy at the store if it’s even available. Micro greens are harvested at a young age when they’re tender and full of nutritional value. Another top seller this year are the gourmet mushrooms from Private Pantry Produce, she said, with varieties usually not available at stores. “Having gourmet mushrooms in Southwest Nebraska is incredible,” she said.

There’s also free-range chicken eggs and soon to be available, locally produced honey. She’s always looking for new vendors, particularly those who can do baked goods like breads or cookies. In the future, she’s hoping vendors will be able to attend some of the drive-throughs, to meet their customers and strengthen the customer/seller bond.

One customer, Nicole Strecker, said she prefers to buy from the drive-through as some family members have health issues and she’s leery of the pesticides and other chemicals used on vegetables at the store. “ And, I’d rather support someone local than a big corporation,” she said.

Sandburg said she’ll keep the drive-through going until the vegetables run out, maybe in November. After that, she’ll still have plenty to do: she and her husband have 10 children, six still at home that she homeschools. That includes lessons on self-sufficiency.

“On a farm, everyone has chores to do,” she said.