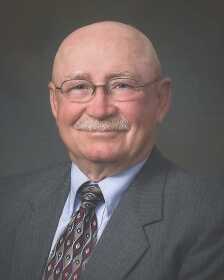 McCOOK, Neb. -- For the better part of four decades, Roger Wilson immersed himself into almost every aspect of McCook Community College. He came to McCook in 1970 as a biology instructor and retired in 1999. He then coached women’s basketball for a year. In 2002, he was elected to the Mid-Plains Area Governing Board and served for eight years and retired again – believing in term limits.

For these and many other services in support and promotion of the college, Roger Wilson will receive MCC’s President’s Award winner for 2020 during Commencement Ceremonies Friday, beginning at 10 a.m. at the Peter and Dolores Graff Events Center.

While he was at MCC, Wilson taught microbiology, botany, genetics, human physiology, but mainly general zoology and general biology. He involved himself in student activities such as director of intramurals which included softball, volleyball, basketball, ping pong, pool and horseshoes.

He was chosen Teacher of the Year three times. He also helped initiate Inter-high Day in 1973, which continues today.

Wilson served as Camp Director for the Youth Conservation Corps sponsored by the Bureau of Reclamation to work on area reservoirs from 1971-1979. Thirty young men and women between the ages of 15 and 18 lived and worked out of Brooks Hall. He is probably remembered by hundreds of students as sponsoring a yearly canoe trip down the Niobrara River for a two-night, two-day trip. He once took 115 students on that trip.

He became an MPCC board member at a busy time which included selecting a new area president as well as: establishing satellite learning centers, building the Peter and Dolores Graff Events Center, building the new health and science building in North Platte, restructuring funds for the McCook College Foundation and starting a new foundation in North Platte. Wilson served several terms as MPCC’s representative on the Nebraska Community College Association’s Board of Trustees. He also chaired the MPCC Board’s Finance Committee for several years.

Roger and his wife Marjorie’s three children graduated from MCC and went on to graduate from four-year schools. His many advisees and students became doctors, dentists, pharmacists, biologists, and many other successful careers. Many came back to live and work in McCook.