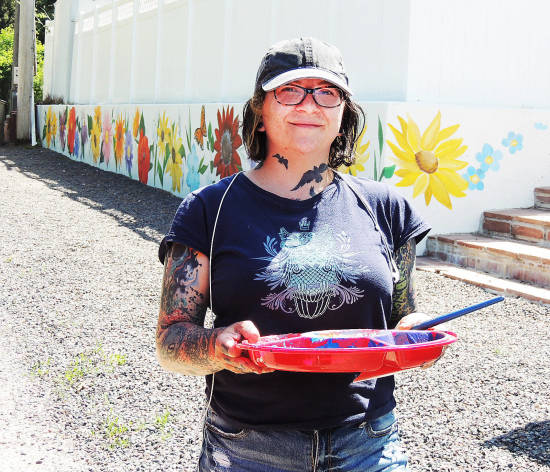 Ginny Anderson is about halfway done with the mural she is painting on a retaining wall in McCook.
Lorri Sughroue/McCook Gazette
Order this photo

McCOOK, Neb. — A local tattoo artist, sidelined by the coronavirus, has switched from decorating the body to decorating sidewalks and walls.

Ginny Anderson, who co-owns with Thomas Adams The Tattoo Shop of McCook, has been a tattoo artist for 24 years and is a walking billboard of her craft. Almost every part of her body, including her armpits, are tattoos she’s done herself, sometimes left-handed or by using a mirror. Some commemorate milestones in her life, like the baby foot prints of her sons and the signature of Hank Williams III, from the time when he gave Anderson his autograph. Some pay homage to her personal favorites, such as what she calls “the morbid Bob Ross,” a slightly ghoulish rendering of the iconic PBS painter who, years ago, wrote her back after she sent him a fan letter. “I have a lot of Bob Ross stuff,” she admitted.

When the coronavirus pandemic forced tattoo shops to close — as well as nearly every other business in the nation — Anderson found herself without a source of income. 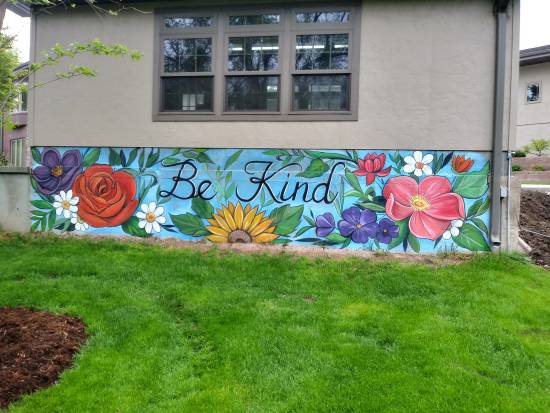 Another of Ginny Anderson's works is visible from the walking trail east of Kelley Park.
Bruce Crosby/McCook Gazette
Order this photo

That’s when local individuals and non-profits stepped in.

McCook Community Foundation commissioned her to illustrate the sidewalk in from of Sehnert’s Bakery with the names of local businesses. Chris and Annette Wagner paid her to paint their retaining wall that faces one of the Kelley Park Trails, with the colorful reminder to “Be kind.”

And now, she’s in the process of completing a flower mural on a retaining wall that faces Kelley Park, commissioned by Chad and Katie Graham.

“She said she’s been thinking about putting sunflowers on here for a while,” Anderson said. “So I’m doing that and adding some other wildflowers, to go with the landscape.”

The pandemic seemed to bring out the best in some people. The commissioned work is keeping her afloat while her shop is closed down, she said. “I’m really grateful to those individuals who hired me, because it means I have at least some revenue coming in,” she said.

Anderson said she spends about five hours a day on the mural, using plenty of sun screen and now wearing a hat “because the tips of my ears got sun burnt the other day.” It should be finished up in a couple of days, she estimated.

With pandemic restrictions loosening by the week, she expects to be going back to the tattoo shop sometime in June. When that happens, she’ll have lots to do: Anderson said she already has nearly two month’s worth of backlogged appointments to re-schedule.