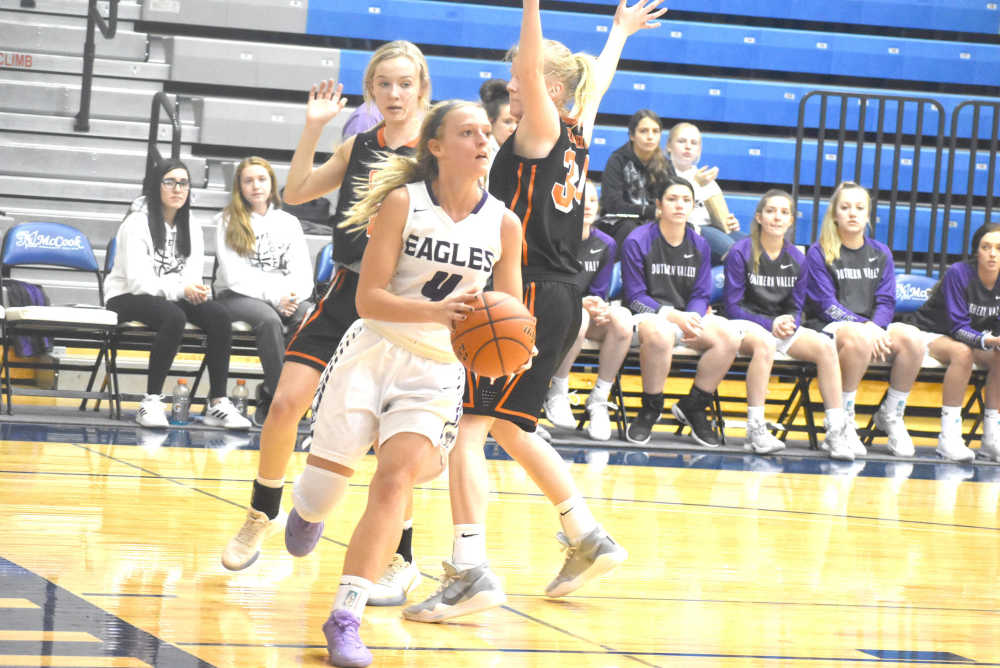 Speed limits had to be strictly and smartly followed Tuesday night.

Sure enough, all this discipline brilliantly led to a surprising 44-33 Southern Valley victory at McCook’s Graff Events Center.

The Eagles were 2-7 entering last week, but they’re now 5-7 after holding their third consecutive opponent to less than 39 points.

“The girls have done a great job of buying in, and defense has been the key,” McDonald confirmed. “If we had gone in the 50s or low 60s tonight, I don’t know if we had the depth or shooting to keep up. But if we could keep in the low 40s, we’d have a chance.”

Senior Grace Hogeland was the one Ferrari who often drove around and past speedy Longhorn defenders.

Hogeland zoomed to 19 game-high points with many helping her Eagles break free from a tight 23-19 first half.

“Grace did a great job of picking when to attack,” the coach observed. “And she hit some big free throws late.”

The Eagles outscored Chase, 13-9 during a fourth quarter where those Longhorns (7-3 record) often clinch their own victories.

Yet McDonald envisioned an even worse number when McNair scored seven of those Longhorns’ first nine.

He credited the efforts of sophomore Krista Best along with a box-in-one defense that contained McNair from topping 20 or even 30 points on this night.

“The girl we originally planned on (guarding McNair) got sick today during first period (of school),” McDonald explained. “So we turned to Krista. We said just stay between her (McNair) and the hoop. She did a good job of that.”

The Eagles also received more needed offense from seniors Janessa Kring and Lauryn Samuelson, who teamed to score another 20 points.

They’ll aim for a fourth straight win in Friday’s home game against Holdrege.