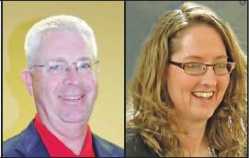 McCOOK, Neb. — It took two separate votes of the McCook School Board to choose a local bank for a half million dollar energy loan from the Nebraska Energy Office.

Three local banks — MNB, Pinnacle Bank and First Central — were listed with the Nebraska Department of Environment and Energy office for the 1% low-energy loan, that the McCook School District will use to pay for energy-efficient upgrades in the schools. The loan is capped at $500,000 at 1% interest for school districts; the Nebraska Energy office pays the difference of interest rates charged by the bank.

Board member Dennis Berry made the motion, seconded by board vice president Teresa Thomas, to use MNB as the local financial institution for the loan.

Board member Loretta Hauxwell asked if there was any background documentation or paper work to look at, with Brazell responding that the energy office has lists of eligible financial institutions and there is no paperwork at this time. Dennis Berry said all three banks were great partners with McCook Public Schools and board member Mike Langan agreed.

Tim Wiebe of MNB, the only bank representative present at Monday’s meeting, said MNB has done these types of low-energy loans with the Nebraska Department of Energy and is familiar with the process.

The six-membered board was down to four members voting, with member Brad Hays absent and board president, Tom Bredvick, chief financial officer at MNB, abstaining.

Three voted in favor of MNB — Thomas, Berry and Langan — with board member Loretta Hauxwell voting against it. As the board is six members, four votes are needed for a majority vote. Since the vote was 3 to 1, the motion for MNB Bank failed.

Hauxwell said she had expected more information and documentation to “make an educated vote.” She said her vote had nothing to do for or against any of the banks being considered and noted there was only one bank represented at the meeting.

Brazell said he has been in contact with the three banks about the loan and that all three have worked with MPS system before. He confirmed Teresa Thomas’ comment that the terms of the loan are the same for every bank.

After further discussion concerning the application process for the loan, Hauxwell said she would like to remove her “no” vote.

The motion was made again by Berry to use MNB as the financial institution for the energy loan and seconded again by Thomas.

The vote was unanimously in favor, with Bredvick again abstaining.

Prior to this vote selecting a bank, the board voted unanimously to approve the McCook School District entering into an agreement between MPS and the Nebraska Department of Environment and Energy for a low interest energy savings loan.

The final voting item of the meeting was the approval of an Energy Savings contract with TRANE, a heating and air conditioning company. The contract with TRANE included that TRANE and sub-contracting partners shall not exceed $500,000 for energy savings projects in all the buildings in the school district and those projects are limited to lighting retrofits, recommissioning, building automations systems and HVAC retrofits.

Before the vote, Brazell told the board that the upgrades identified by Trane are subject to approval by the Nebraska Energy office.

It will cost $290,000 to change lighting in the school district to LED lighting, Brazell said, that board president Tom Bredvick noted was 60% of the loan.

Brazell also said the loan is for 15 years but can be re-negotiated. As the upgrades will pay for themselves in about five years, the Nebraska Energy Office usually wants the loan paid back in the same amount of time, he said.

The school board unanimously approved the contract with TRANE.