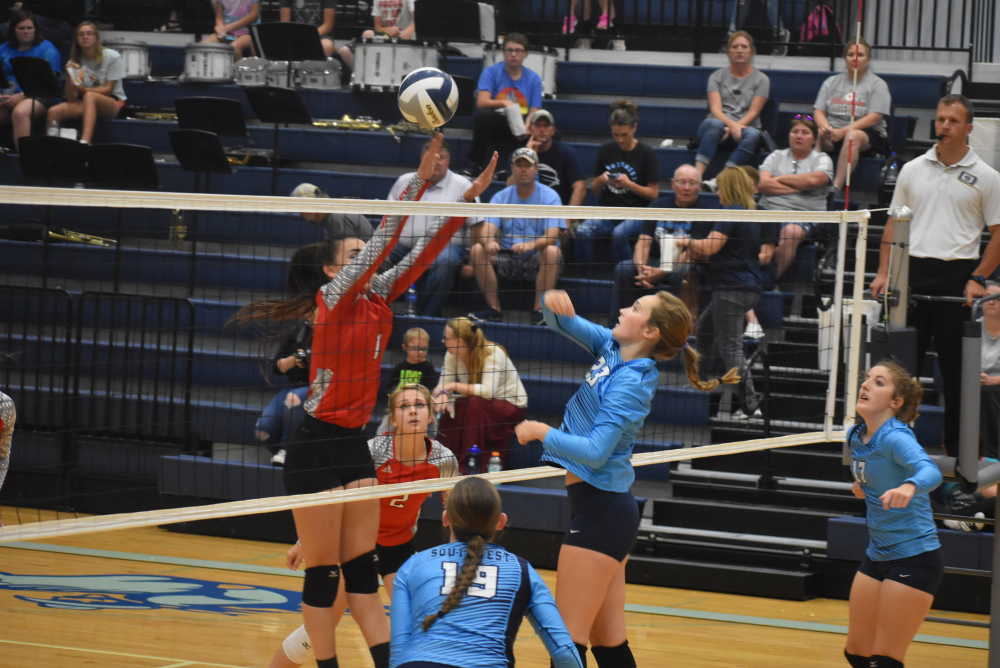 BARTLEY, Neb. — Confidence’s building in Bartley this fall along with quite a senior-freshman combination on the volleyball court.

Senior Jadyn Brooks showed what she can do when not captaining Southwest’s cheerleading squad.

“Jadyn hurt her ankle early last week (against Maywood-Hayes Center) so this was a nice comeback night for her,” coach Kim Barnett declared.

After drawing the ’Riders even at 1-1, Brooks resumed her setter/quarterback duties by finding two terrific new targets:

Together, they powered the Roughriders past Sutherland’s Sailors 25-16 and to a final dramatic 25-23 victory.

So much for a fifth set that seemed inevitable when Southwest fell behind 16-11 and still trailed 21-17.

“I don’t know how we had gone through a fifth set because there were so many long volleys tonight. I’m not sure we’d had the legs left for it,” coach Barnett observed. “It was great to finish it in four. It should definitely help raise our confidence.”

Of course, other Roughriders contributed to this terrific home win.

Senior Johanna Sughroue made a memorable dig during the final set, leading to a crucial Southwest point which helped turn momentum.

Junior defensive specialist Allison Rippe was also covering the home court brilliantly, while others like senior Kailey Wilcox and sophomore Bailey Oltmer kept those Sailors from ever regaining much of an advantage.

Other official stats were not obtained.

The Roughriders will take this momentum into a big challenge against Southern Valley Thursday night.