McCook's beloved 'Mr. BIll' -- Making a difference, one snow cone at a time 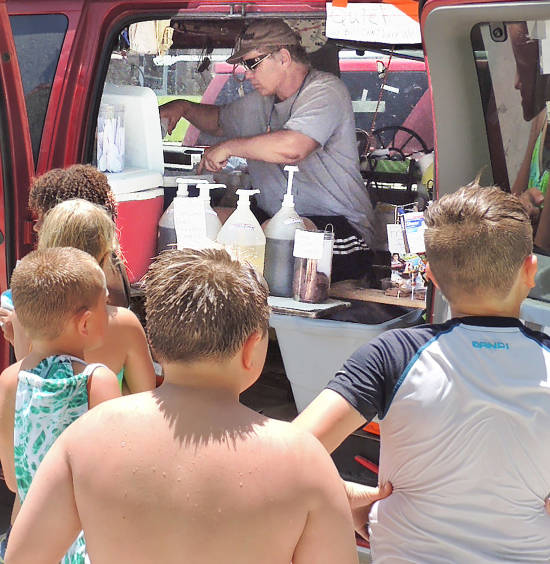 McCOOK, Neb. — As Oprah Winfrey would say, free snow cones for everyone!

A Good Samaritan (or a big kid at heart) recently gave Mr. Bill, a curbside candy vendor in McCook for the past 36 years, a donation of $50. Like he does with other donations, Mr. Bill will use the money to give out free snow cones. At 25 cents per foam cup, that’s 200 free snow cones.

Also known as Bill Donze, Mr. Bill said he’ll keep track of the number of cups that go out until the 200 mark is reached. 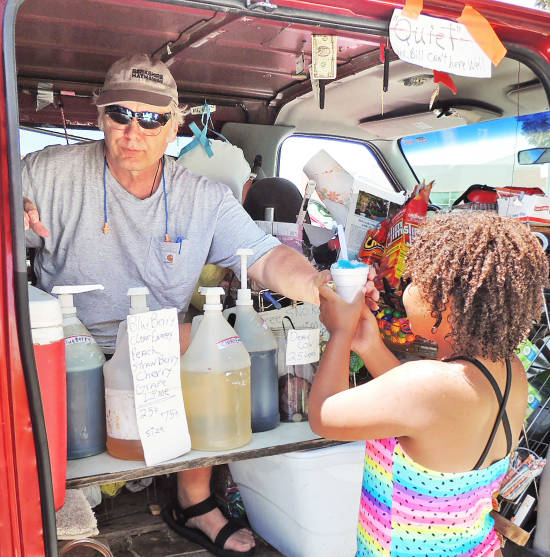 Lillie Adams, 10, gets her free snow cone Thursday from Mr. Bill at the McCook swimming pool. Thanks to an anonymous donor, kids are getting free snow cones from the popular candy vendor. Mr. Bill is also a popular YouTube storyteller, with 965 videos on a wide variety of subjects posted on his donze52 channel, https://www.youtube.com/user/donze52
Lorri Sughroue/McCook Gazette
Order this photo

A fixture by the city swimming pool and Norris Park, it’s actually not the first time people have given him money, Donze said, with donations in the past at $10, $20 and even $100 one time. “That took a number of days to get through,” Donze recalled. But what ever the amount given, it means free snow cones.

Donze has been selling snow cones, “dead cows” (beef jerky), gum and other candy since 1983 and is now seeing children of the kids he first sold to in the 1980s. Everything he sells is 25 cents, even though snow cones cost him 40 cents each to make.

He even gives out free treats for kids who don’t have money: three gummies or five pixie sticks.

Outsiders may have reservations about a man selling candy from his van — but to those growing up in McCook the past 30 years, there’s nothing creepy about it. Kids will tell you Mr. Bill is the best place to get candy after school in the winter, or after playing at the park or pool in the summer.

“His snow cones are really good and he’s really nice,” said one boy, dripping wet in his swim suit and buying a lime and cherry snow cone outside the city pool Thursday. “His stuff is cheap,” said another swimmer.

His patience for his customers, and the respect he gives them, is legendary. He greets each kid personally, keeping up a lively line of chatter. He calmly waits inside the hot van (it can get up to 130 degrees in the summertime, Donze said, according to the temperature gauge he keeps nearby), while a child clutching a handful of dimes and pennies debates over a blueberry lime snow cone or a grape blueberry snow cone. (“They only get two (flavor) choices, otherwise it takes too long,” Donze said.)

From the outside, the van looks unremarkable. But when the side doors open, there is a cornucopia of treats laid out at child-eye level, giant bottles of snow cone flavorings, even a box of band-aids clipped to the roof he keeps for kids who need one.

Donze once had a mother tell him he shouldn’t be handing out bandaids as he was practicing medicine without a license. “Take me to prison then,” Donze remembers saying. He was vindicated a short time later when another mother gave him three boxes of bandaids, after Donze had given her daughter a bandaid after a bad scrape.

“It doesn’t bother me, they’re just trying to make a living,” he said. “Me, I have three or four jobs so I can do this for free.” These jobs through the years included handyman jobs, doing fencing and other odd jobs for a rancher and working nights at the local bakery.

But for Donze, there’s more important things than money. Donze said he went broke twice before deciding, “I guess I won’t be rich on this earth. So I told God, that’s okay, just let me make a difference.”

And for kids in McCook, he’s doing that, one snow cone at a time.