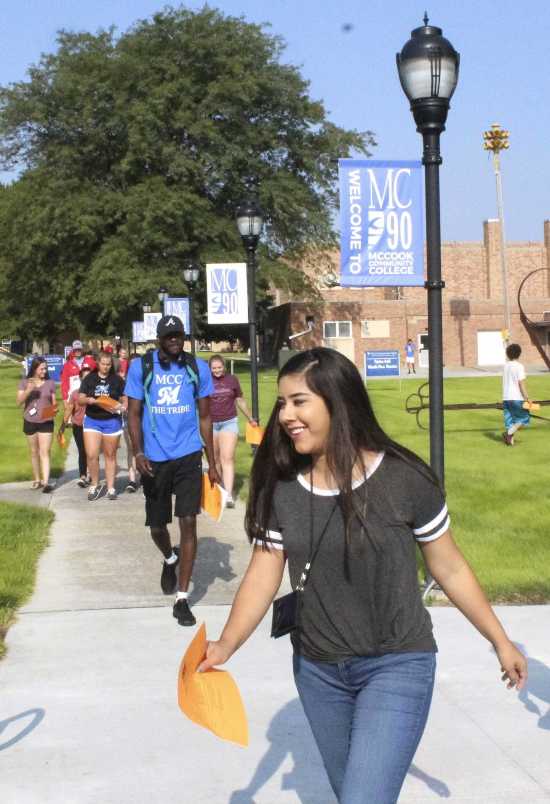 McCOOK, Neb. — With the start of fall classes Sunday at McCook Community College, enrollment numbers are again looking strong, but what has college officials really excited this year is the record number of returning students and the increasing number of top-tier academic students now choosing MCC.

Student persistence rates are at a historic high at 86 percent (from fall to spring semesters) and the number of students attending MCC on presidential scholarships have more than quadrupled in the past several years.

“The bottom line is we are bringing in great students and keeping them,” said Kelly Rippen, Area Dean of Enrollment Management and Interim Vice President of MCC/Student Affairs.

In 2012 the number of first-time full-time students who returned to campus following semester was at 53 percent. College officials targeted several areas for improvement which resulted in significant upgrades to Brooks Hall and the student union, expanded tutoring, and increasing efforts in student engagement by the Student Success Center, Student Life and across campus.

By the fall of 2015, MCC’s the persistence rate improved to 60 percent. The following year that increased to 67.2 percent. When the 2018 spring semester numbers were finalized, that improved to 86 percent and officials believe that will translate to a healthy retention rate this fall.

“That persistence rate is our highest on record,” said Rippen, “That means that 86 percent of the students who enrolled for the fall in 2017, stayed for the spring semester, which is very high for a community college. We’re hoping to bring back 86 percent of our spring students this fall, which would be amazing.”

“When compared to a five-year trend, we are still between two and five percent higher than the norm,” Rippen said. Brooks Hall is nearing maximum capacity as are the all the recent off-campus housing additions.

While overall numbers have remained strong, the “collective grade-point average” for incoming freshmen is getting higher, with more presidential scholars applying at MCC. These are the students who have high school grade-point averages of 3.7 or higher and ACT scores above 24 and receive full-tuition scholarships. The number of these presidential scholars has increased from eight to nearly 90 in the past several years.

Citing another positive trend Rippen said she is pleased to see the number of “early-entry” students enrolled this fall from McCook High School and surrounding schools.

“Many of these students are well on their way to graduating high school with one or even two semesters of college under their belts,” Rippen said. “We encourage all college-ready high school students to consider this option if they want to save money and push themselves at an academically higher level their junior or senior year.”

Examining MCC’s various programs, Rippen noted that the welding program is full this fall – and these students will be the first to use new booths and equipment.

“It looks amazing. We are blessed to have the support and passion for that program, it is a great choice for students: highly-skilled, great job placement, and excellent salaries available,” Rippen said.

Rippen urges anyone in the community to look for opportunities to be involved and on campus.

“We have a great group of students starting and coming back, our athletic teams will be fun to watch, our student organizations are always doing amazing things on campus and in the community, and our teachers are always coming up with new and exciting ways to connect with students in the classroom,” Rippen said. “We’re looking for another great year at MCC.”