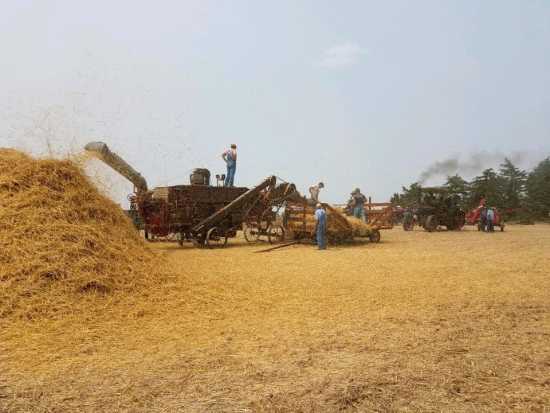 A steam-powered thrashing machine separates the wheat from the chaff.
Dick Trail/Courtesy Photo

We stood off to the side of the separator, more commonly known as a threshing machine, and visited. The gent was on the seat of an empty wagon behind a pair of beautiful bay mules, waiting in line to sidle under the grain spout of the thresher. Both arms covered by tattoos he told me that he had long time been involved with the motorcycle crowd but this was more fun.

Yes, your columnist attended the annual Bum Malleck Threshing event four miles south of Indianola. Nice crowd. Nice day. Some 88 degrees warm but enough breeze to be comfortable. Griff, son of Bum now deceased, puts on the event each year to honor his dad in connection with Indianola’s Old Settler’s Day. Special this year was to see an ancient wooden threshing machine in operation courtesy Gayle and Ken Kircher. For the farm boy in me, it is my annual fix for how it used to be in my boyhood. Dad raised a few acres of wheat, down on the bottom, and cut it with a binder, shocked the bundles to dry and then arranged for a fellow with a threshing machine to come and the neighbors gathered to help thresh. Griff powers the antique machine with a steam engine, we used an ancient gasoline tractor to pull the long belt. A myriad of flat belts and chains arraign the outside of the thresher, no shields, a modern EPA nightmare. Horses and mules, Lee Janssen involved, draw the hayracks loaded with bundles of unthreshed wheat. It is pitched by hand into the conveyor feeding the machine’s cylinder then a chaffer, screens and air separate the wheat grain from the straw and chaff. Actually, the principle is the same for today’s modern sleek combines operating at many times the capacity of old and steered by one person safely shielded from all the mechanisms while sitting in air-conditioned comfort.

Griff’s threshing event is way more than the threshing machine. There are corn shellers and elevators turned by horsepowers. He demonstrates a sawmill producing dimension lumber from local logs and powered by an antique tractor turning a long wide belt just as they did it years ago. A shingle maker producing shake shingles. A long row of antique tractors, Oil Pull Rumley models from small to humongous. John Deere tractors some in rust and most with pristine new paint. Other makes of antique tractors and a large number of small to larger antique engines all of which run and are demonstrated during the afternoon. 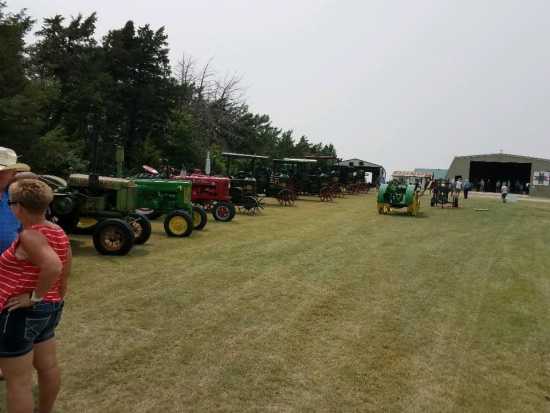 A beautifully restored one-room schoolhouse is open for inspection. Home sewn quilts are on display and in a large shed, a gent is crafting brooms and another wooden stave kegs, barrels and other household utensils dating back to what our pioneering forefathers used. Dixie, a first-time visitor, caught me there and implored that I write up the event. She’d come sans husband who used the excuse that he had to mow the lawn. She said that her husband would have loved it and would be there for sure next year. So too should you. Plenty of parking, a tent for shade and refreshment. A caterer on site and the price is free. Thank you, Griff.

As usual, I took the country roads along the south side of the river back to McCook. I like to look for the streak of volcanic ash layer in a deep cut of the road. Laid down millions of years ago but the California wildfire smoke in the air that day reminds that nature rules supreme. Miles of corn looking especially bountiful this year. Soybeans, forage sorghum, alfalfa and weedy roadsides. Then past Patsy’s Heartland Cattle Company a world leader in animal genetics. Hard working enterprising friends and neighbors.

Back home I paused to watch the radio controlled aircraft demo taking place in Barnett Park. In short order, the afternoon and evening concert was preparing to start. Past the fairgrounds with a large number of livestock trailers, motorhomes and campers parked while cutting and team ropers worked the arena. Nope rural Nebraska is not a boring place to live.

Now a feel-good neighbor story. You may have noticed more military helicopter activity than usual coming and going from the McCook Airport this past week. Well early last week somewhere east of Benkelman a Chinook helicopter, big as a large school bus, was en route to a fuel stop at our airport. A transmission chip light came on to indicate chunks of metal circulating with the oil in the transmission that powers one of the huge rotors. The pilot prudently made an emergency landing in a farmer’s field close by. In short order, the farmer appeared. The pilot reported that they were broken and had to be fixed before they could leave.

“Well here is a pickup you can use and if you are still here this evening we’ll get up a barbeque for you and your crew. Oh yes, we can also put all of you up at night for as long as you need to stay” was the selfless response by the welcoming farmer. Turns out that replacing the transmission is a four-day job and other helicopters from the unit have been stopping for fuel in McCook as they come and go carrying replacement parts, equipment and the required mechanics to do the big job.

See why I love the people in Nebraska.