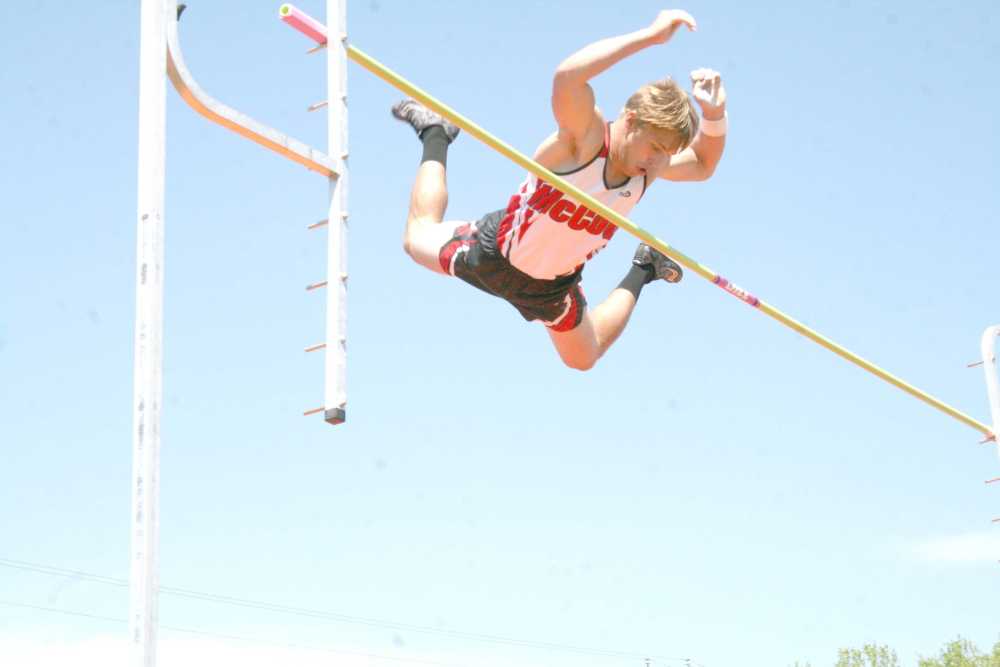 McCook sophomore Landon Towne clears the bar at 14’2” which earned second in Thursday’s B-6 district pole vault at Ogallala. Vaulters Towne, Tyler Lytle and Joel Carter were all top four placers who will compete in next week’s Class B meet.
R.B. Headley/McCook Gazette

OGALALLA, Neb. — Landon Towne was literally a Bison “red bull” who could barely stand still at Thursday’s B-6 district meet.

Who could blame him?

“We’re not used to vaulting in front of 15,000 people, but we will be ready,” Towne proclaimed.

More about the Bison vaulters next week, but not standing still could also describe McCook’s entire team at this biggest meet all season.

The Bison kept running up points whether it was junior DJ Gross hitting a career-best discus mark (167’4”), Morgan Fawver winning his second long jump in less than one week or sophomore Cameryn Berry dominating 800 meters around Ogallala’s home course.

O-Town, here they come along with many other state qualifiers on McCook’s latest B-6 district champion squad.

The Bison tallied 132 points to blast past closest contenders Sidney and Scottsbluff (101 each) on Thursday.

No one had more of a blast than senior Zach Schlager.

That’s right, the same school record-setting high hurdler who had missed every meet since March due to a hamstring injury.

He could have just forgotten track and focused on his new Division I football career starting at Colorado State University.

Who are we kidding?

This is Zach Schlager.

Of course, he was going to run — and WIN — Thursday’s 110-meter high hurdles.

Even though he started in lane eight which is never reserved for a race favorite.

“Yeah, I had something to prove,” Schlager said as his 15.13 time topped Gothenburg challenger Barrett Folkers (15.42). “It (the hamstring) felt good. It’s great to be going back to state.”

Schlager will actually compete in two events thanks to another clear Bison highlight on Thursday.

Schlager, Alec Bunger, Fawver and Wilcox will run again for the Bison at Omaha Burke Stadium one week from today.

There were plenty of other highlights including junior Colin Giron hitting a career-best shot put (51’1”) and also making state in discus (151’1”).

McCook’s 3200-meter relay and junior jumper Seth Dugger were other confirmed state qualifiers. Watch for a full rundown and other details in Monday’s Gazette.