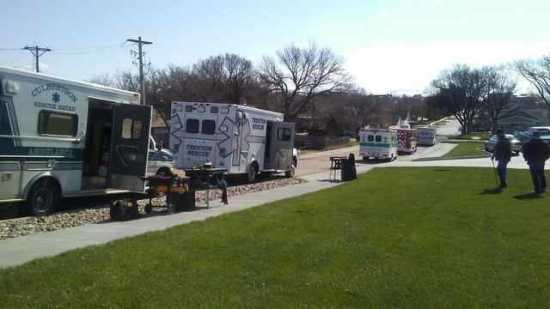 Ambulances line up at McCook’s fire barn to receive cell phone boosters purchased through a $7,000 grant provided by Community Hospital Health Foundation. The boosters do just that: boost the cell phone signal in remote areas to help the ambulances communicate with hospitals and to request needed resources.
Courtesy photo

McCOOK, Neb. —Imagine you or your loved one has an accident in a rural area in southwest Nebraska. First responders arrive at the scene and need to talk to a doctor, ask for backup or request an air ambulance at the scene. There’s only one problem; the first responder’s cell phones won’t work due to poor cell service.

This was a somewhat common problem for area ambulance squads until a $7,000 grant from Community Hospital Health Foundation purchased cell phone boosters for 17 ambulances in 12 towns surrounding McCook in April.

Kyle Teel, an EMT with the Indianola Rescue squad said, “When we are in the middle of nowhere, the booster will be a lifeline.” He is really excited about the reliability of improved communication. “Just being able to contact people when we are on scene,” he said, explaining they often have needs for additional resources such as law enforcement, the coroner, medical director and extra staff and support.

He also explained that about halfway between Indianola and McCook, there is a cell phone dead spot. “We are giving report to a nurse in the ER en route to Community Hospital and the call gets dropped. When we call back, we need to confirm what got communicated by repeating what we already reported.”

“On their way home, Trenton Rescue called back to tell us they had cell phone coverage all the way back to Trenton,” Olson said. “They are really excited about the increased communication and safety the boosters will provide for the rescue squads,” she added.