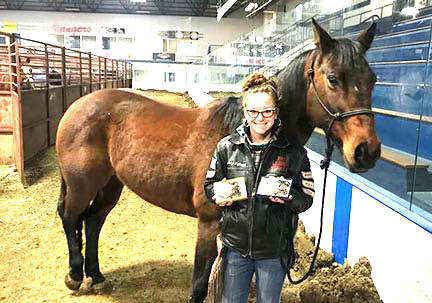 BROOKINGS, S.D. — The Mid-Plains Community College Rodeo Team is off to a good start following the first of its spring competitions on Friday and Saturday.

“It was a lot of fun,” said Schnose. “I’m really glad my horses worked as well as they did. I’m also really thankful to have my coach and the teammates that I do.”

Joining her for the team roping win was her teammate JT Bradley, of Brewster, Neb. Sawyer Strand, of Harrisburg, S.D. placed second in the team roping for MPCC, and Garrett Wickett, of Norfolk, Neb., was third in the bull riding.

Schnose’s first run in the breakaway was 2.9 seconds, which put her in eighth place. She returned to the short go and caught her next steer in three seconds flat.

“It was a nice, solid run and from that point on, she just let everybody else beat themselves,” coach Garrett Nokes said.

Nokes was also thrilled to see Bradley and Strand do so well in the team roping – especially considering it’s their weakest event.

“And then Wickett came in and rode one bull and ended up third,” Nokes concluded. “He’s been really strong for us this year and proved to be again.”

While MPCC didn’t end up in the top two in the men’s team standings, it didn’t lose a lot of ground either.

The team’s next competition will be Friday and Saturday at Black Hills State University in Spearfish, S.D.