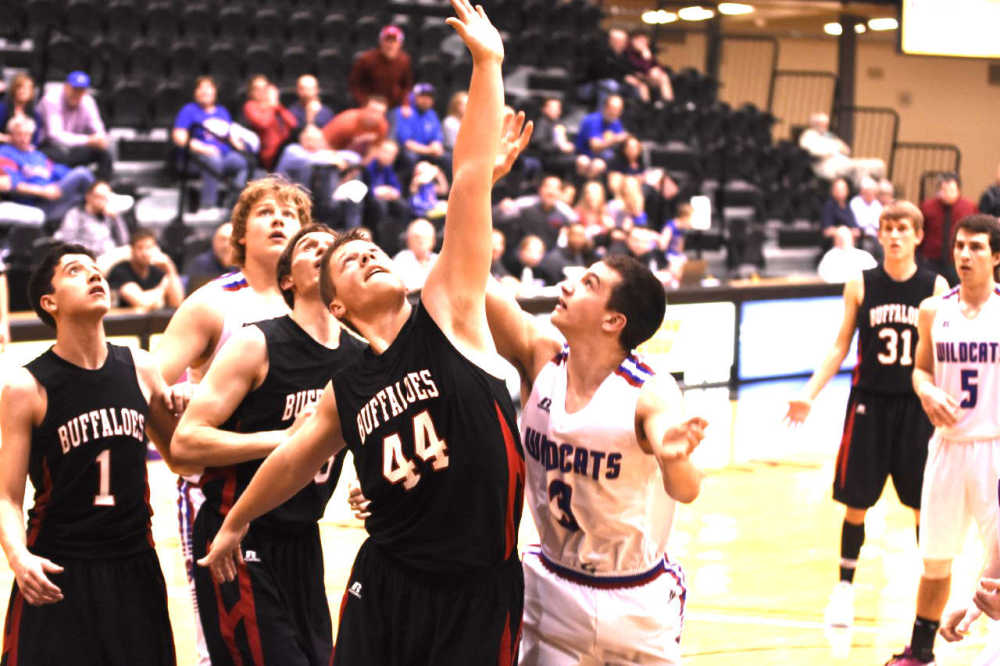 Rawlins County junior Arie Olson (44, above right) contests the shot of Hanover’s Dacey Hagedorn (1) as the Buffaloes battled to a 29-29 halftime tie. Junior Jorge Chacon (1) is among the other Rawlins County players close to this play at Gross Memorial Coliseum. Hanover advances into Friday’s state semifinals.
Holly Haufler/Marysville Advocate

HAYS, Kan. — With a 40-40 tie and Hays sounding like southeast Atwood, coach Ryan Marvin knew 24 years had been worth the wait Wednesday night.

“It was incredible. It was like a home game for us,” he declared about Rawlins County’s Kansas state tournament basketball game Wednesday night. “I looked up and nearly all our side (of the arena) was filled.”

No Buffaloes fan was miss this first boys’ state hoops game since the 1990s.

All those Rawlins players made their first experience of lifetime count.

Senior Nick Withington netted 22 points before halftime, and when classmate Braden Leitner buried his second “triple” — the crowd was going Davonte Graham crackers about a 40-40 deadlock.

Not even Hanover’s resounding 25-4 finish could ruin a special night for the northwest Kansans.

“We got into foul trouble, and frankly we just weren’t used to that much size across the board,” Marvin confessed about the eventual 65-44 defeat to Class 1A-1’s defending state champs. “It was a real competitive game, but we got into a stretch of not running our offense too well.”

Junior Jorge Chacon’s three-pointer had caught the Wildcats earlier in this third quarter.

There would not be another basket for the sixth-seeded Buffaloes.

Point guard and season-long scoring leader Leitner had battled foul trouble through most of this contest.

“Not having him (Leitner) at crunch time definitely hurt,” Marvin confirmed. “He pesters a little bit and sometimes can get away with a few things because he’s so quick.”

“That didn’t happen last night,” the coach added in this morning’s post-game interview.

Withington, Leitner join seniors Lane Hamel and Jerry Oelschlager as the only Buffaloes departing from this year’s state-qualifying squad.

The 25 points finished a fantastic Withington late-season surge which featured 30 on 13-of-14 shooting against substate foe Stockton last week.

Withington drew his third foul early in the third quarter. Both he and Leitner departed briefly while the Wildcats began to claw away from a tight 42-40 contest.

“He lost a few minutes for sure,” the coach observed. “Nick played great. Unfortunately, we couldn’t get anything to fall from outside during that stretch.”

“It was fun to see these guys experience every kid’s dream and play on the big stage,” Marvin concluded. “Obviously, we’ve set the bar high for the the next seasons.”

The Hanover Wildcats advance into Friday’s 1A-1 semifinal against Centralia, which eliminated Osborne earlier on Wednesday.