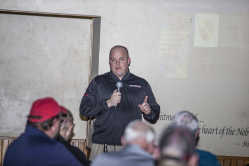 McCOOK, Neb. -- Husker fans young and old showed up to McCook’s Coppermill Steakhouse on Monday to listen to Husker Online publisher Sean Callahan during his annual stop in Southwest Nebraska.

As part of his yearly spring tour across the state, Callahan’s presentation included a recap of the 2017 season, an overview of the 2018 recruiting class and, of course, the hiring of Nebraska head coach Scott Frost.

Callahan began his talk by saying “no one expected 4-8,” and delved into the change from athletic director Shawn Eichorst and head coach Mike Riley to Bill Moos and Frost.

According to Callahan, one of the biggest driving forces for change was apathy from Husker Nation.

But Callahan said he views Moos as “an outstanding hire,” and said Moos’ personality and perspective align with what Nebraska is looking for.

“He (Moos) said football is the front porch of our state, and he’s right,” Callahan said. “He wants to be involved and get to know people on a personal level.”

Plenty of time was spent discussing Frost’s hire too. Callahan discussed the involvement Matt Davidson, Frost’s former teammate, had in the process as well as the timeline with which everything took place.

A big portion of Monday’s event was spent discussing the 2018 Nebraska recruiting class.

One interesting observation Callahan made was that Riley’s initial plan was to sign 17 or 18 recruits for the 2018 class. Frost, who missed most of the early signing period in December, managed to sign 24.

“What’s really impressive is that he (Frost) signed that many without having to reach for recruits who were looking at smaller schools,” Callahan added. “Bo Pelini, especially, had a tendency to offer guys who only had MAC or Sun Belt offers late in the recruiting process.”

Callahan also said the eight signees from Florida is believed to be the most Nebraska has ever signed from a single state.

“That includes Nebraska,” he said. “We get a lot of in-state talent come to the program as walk-ons, but not many sign as scholarship players.”

“I think a lot of those guys can come in and be Day 1 starters,” he said.

After a video showing the 2018 recruiting class, Callahan fielded questions from the audience. Many asked about the program moving forward, but there were a couple inquiries about last season and the previous coaching regime.

The most popular question of the night asked what planet former defensive coordinator Bob Diaco was from.

Callahan said he remembers when he first learned about the McCook Bison.

“It would have been around 2005 or 2006, when McCook had Brendan Liess and Tony Purvis,” he recalled. “I came out here to see them and to see Nathan Enderle in North Platte.”

He can also recall the first Bison game he saw.

“I watched Jeff Gross and the Bison play Lincoln Pius in the state championship game. Even though they lost, I was really impressed with their team. I thought, ‘God, these guys are fast and fly around.’”

Later in the one-on-one interview, Callahan said he considered the Frost hire a “fairytale ending” to an infamous season.

“It’s amazing how all the suffering led to the best possible scenario. Rarely does a 4-8 season lead to this type of ending.”

As publisher of Husker Online, Callahan said he's also seen an uptick in online traffic and memberships since Frost's hire.

“It feels like everyone is unified. That includes the players, coaches, administration, the former players and the fans.”

Towards the end of Monday's event, Callahan discussed next year’s team. The best-case scenario, according to Callahan, is eight wins.

“Within five years, the goal is to win the West (Division) and be competing for conference championships.”

Callahan continues his tour with stops in York, Columbus and Norfolk on Wednesday.