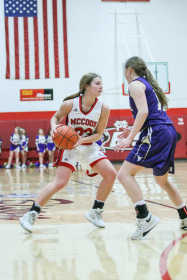 Bailey Honn brings the ball in against a Holdrege defender during Saturdayĺs game at McCook Senior High. The Lady Bison beat the Lady Dusters 62-52 to improve to 4-4 on the season.
Gabe Gauthier/McCook Gazette
Order this photo

McCOOK, Neb. -- McCook head coach Amy Scheil said it doesnĺt matter who scores for the Lady Bison. All she hopes for is balance.

McCook found plenty of that Saturday night, as four Lady Bison finished in double figures in a 62-52 win over Holdrege.

ôI thought they came out really, really well. They played as a team right from the beginning and put a lot of pressure on Holdrege, which we thought we needed to do. Our zone press worked a little bit, then we went to a man press in the second half.ö

Mackenzie Smith led the home team with 18 points, while Emily Arp had 12, Erika Fisher got 11 and Bailey Honn finished with 10.

Scheil said that type of balance is what McCook is aiming to have.

Down the final stretch, Fisher played an integral role by hitting five of her final six free throws to help preserve the Lady Bison victory.

ôLast night (against North Platte), we missed free throws and lost by 16 points. That was pretty important in our meeting this morning. We talked about free throws and turnovers. At the end of the game, I wanted to get the ball in Erikaĺs hands because sheĺs probably our best free throw shooter and she did a good job.ö

With the weekend split, McCook is now 4-4 on the season. The Lady Bison close out the pre-Christmas portion of their schedule with a road game at Broken Bow on Thursday.

After an 11-11 deadlock in the first quarter, North Platte went on a 21-8 second-quarter run to pull ahead 32-19 at intermission.

ôWe played a good three quarters,ö McCook head coach Amy Scheil said. ôThey outscored us in the second by 13 points and we never came back from it. We lost our intensity. It was a lack of defense more than anything. Thatĺs one thing we focused on (heading into the Holdrege game). We canĺt have those types of lapses.ö

McCook was also hurt at the free throw line, where the Lady Bison shot just 9-of-19.

Liviya Wier had a team-high nine points for McCook, while Mackenzie Smith added eight. Jaden Bryant and Brantleigh Morgan each had five points.